While global warming is threatening the life of our planet if not the Milky Way, Austria woke up to something that mavericks like to enjoy at the end of the summer: snow.

It's been pretty intense and some ski resorts (which were predicted not to see any snow again a few years ago) received as much as 50 centimeters of new snow. In the summer. 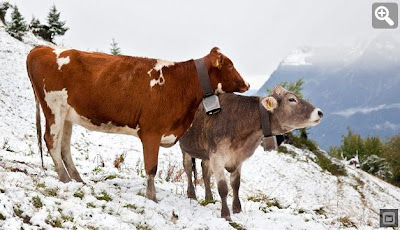 Regardless of their skin color, two Austrian citizens relax at the snow-covered pastures above the Furggels Valley. Click for more photos.


Much like all interesting and uninteresting weather events on Earth and beyond, this fun was brought to you by man-made global warming that was caused by CO2 emissions from industrial companies and viewers like you. Thank you. ;-)

On Tuesday morning, media will tell us that the snow and "record cold spell" has actually arrived both to Austria and Switzerland. The ski resort in St Moritz enjoyed 45 cm of snow – an unseen pleasure for September. The storm was really centered in Italy where the weather killed four people over the weekend. So far, the pictures are not as icy as when the global warming arrived to Versoix, Switzerland.

From the Alps to Indian mountains

Summer snow in the Alpine republics isn't the only global catastrophe that global warming has recently caused. A few weeks ago, we noticed that the extraterrestrial aliens as well as sharks decided to fight against climate change and its culprit, the industrial man (especially the conservative white one). It's a great pleasure to inform you that they just received another formidable ally: Indian god Shiva.

God Shiva got upset because global warming has melted a part of the erection of His or Her holy phallus-shaped ice stalagmite in India. AGW-upgraded Hindus will receive 50,000 tons worth of carbon indulgences from the United Nations so that they may buy an icy Viagra for their god.

The rapture ignited by the melting of the phallus-shaped ice will be reported in 13 languages and 24 time zones. If you think that you don't have a clue what the woman is talking about in the video above, think twice. Go to 3:52 of the video and you will hear two words encoding the name of the mysterious culprit who has attacked god Shiva's pride.

Those of you, deniers, who still want to question or even doubt the severity of the crisis and planetary emergency, be sure that Shiva, aliens, sharks, and Al Gore are not the only foes you're gonna face in a few weeks. Once Allah figures out that oil isn't necessary to secure the funding for the Muslims because heroine, cocaine, and opium is enough, you will also face Allah Himself or Herself!