Today, on Monday, the International Monetary Fund gave an ultimatum to Greece. The parasitic communist country should increase the cuts; otherwise it should go bankrupt in early October when it runs out of money.

This is, of course, not the first ultimatum to Greece: some of us remember a similar one on June 21st. As far as I know, Greece failed to obey the conditions but nothing had happened. So this new ultimatum could be just empty words that are gradually losing their value. However, the will to direct Greece towards bankruptcy has arguably strengthened over the summer so it could be different this time.

The European Union also gave an ultimatum today. However, their ultimatum was directed at Germany: Hände hoch and pay everything you have. ;-) EU's Barroso has "demanded" to realize the crackpot idea to introduce CC-rated (soon to be D-rated) eurobonds as the format in which Germany and others will borrow the money. Oops.

An obnoxious left-wing U.S. would-be economist called Timothy Geithner had the arrogance to arrive to Wroclaw, Poland (Poland holds the EU presidency now) and lecture the Europeans about what they should do with Greece. They should surely pour trillions of extra dollars into this black hole, he told our continent. Geithner has also highlighted the general ignorance of most Americans about the world geography when he suggested that Europe was a country that should hang together. Well, it's not one country, Mr Geithner, in the very same sense in which the U.S. and Canada is not one country.

Fortunately, he was assured that he was being a jerk. Despite all the bad things in the EU, the U.S. is among the last countries in the world who have the moral right to lecture European countries about the ways how to deal with their debt. America's public debt is 100% of its GDP; in the EU, the percentage is just 70% or so. This makes a difference.

If America's influential economists think that it's a good idea to pour extra billions into the Greek black hole, why don't they pour their own money? They're going to follow the Greek example in 5 years or so, anyway, so why won't they go an extra shopping spree today? This leads me to the last short comment.

Warren Buffett who has decided that 1/2 of his life has been a gigantic mistake announced that he wanted to disperse 1/2 of his money before he dies – throw the wealth from the helicopter, so to say. All billionaires should throw away 1/2 of their wealth, too, he argues. He has also complained that he was paying a lower percentage of his income to the IRS than his secretaries.

That's why Barack Obama has used the term "Buffett rule" for his newest initiative to convert America to yet another failed communist country. Big taxes for the rich, that's exactly what the American communists have been demanding for years, isn't it?

When I was filling some U.S. tax forms, I have also wasted many hours with the "alternative minimum tax". It was just extremely difficult to figure out whether this would affect my tax return. Only after hours of research, I figured out that this only applied to some very rich people who would otherwise be able to lower their taxes to insanely low levels.

In some sense, Obama only wants to simplify the alternative minimum tax – replace it with the Buffett tax. Well, he wants to increase the taxation for the wealthy, too. Rich people must pay at least the same percentage of their revenue as the middle-class taxpayers. This is surely a popular idea with all egotistic voters who won't be affected by this new policy. It is a road to hell, too.

Warren Buffett isn't an example of a jobmaker. He is a speculator who has just been earning money by buying and selling things and he obviously didn't dream about doing it, anyway. But there are many rich people who actually like their work, who create jobs, and they're the best people who can create useful profitable jobs. That's why most of them became rich. If you are a politician and you steal additional half a billion from those people's wallets, the result is that thousands of people won't be pushed to do useful and productive work. Instead, you will throw these half-a-billions of dollars into a solar toilet whose right to suck the money is being defended by the hardcore communist propaganda preached by extra dirty parasitic people who are sucking billions as well, e.g. the climate "scientists". You're catching up with Greece.

A similar bandit management of the economy simply cannot lead to anything else than decline of the economy. The people who have been proved to be able to do useful things with their money are being punished and discouraged from doing useful things, while everyone else is being trained as a professional freeloader who uses his gangster-like relationships with other freeloaders to steal from the productive people's wallets. But socialism ultimately ends – when you run out of other people's money.

In the 19th century, Karl Marx had a friend called Friedrich Engels who was a rich industrialist. These two jerks wrote some books together but the wealthy Engels continued to fund the Marx as**ole. The result of their optimized delusions and economic pseudoscience was that the growth and prosperity was eliminated from almost 1/2 of the world during 1/2 of the 20th century. 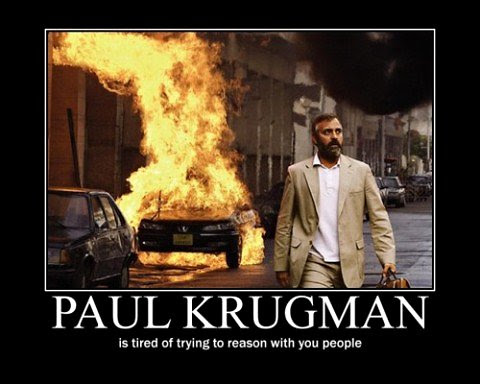 Paul Krugman announced on his very own blog, with this very image, that he's already tired of using his brain so he became a terrorist who will blow up cars instead.

We live in the early 21st century and we're surrounded not just by one Marx as our relatively happy 19th century ancestors but by kilotons of Marxes, Krugmen, and similar garbage. And their being paid and supported not by one Engels but by kilotons of Engelses. To make sure that one George Soros isn't enough, Warren Buffett has so far failed to protest against the abuse of his name in the promotion of Obama's planned pernicious policy.

If you think, Mr Buffett, that you want to throw billions out of your window, you have the right to do it. However, you don't have the right to demand that other millionaires and billionaires do the same thing. Let me offer you an analogy: an Arab Muslim has the right to kill himself in his airplane. By this act, he proves that his market value is equal to zero (more precisely to minus the price of the aircraft). However, he still has no right to kill other people (whose market value is positive and much bigger than the hijacker's price). Do you get it?
Luboš Motl v 12:44 PM
Share