What Al Gore has learned from No Pressure

Last October, on 10/10/10, the activist group 10:10 has become notorious for their No Pressure video in which the lives of climate skeptics and even the lives of insufficiently excited alarmists (including two schoolkids, three secretaries, a soccer star, and an X-Files actress) were ended.

The video opened the eyes of many viewers who hadn't previously understood that global warming alarmism was the Nazism of our time. What has Al Gore learned from this event? 76% of the people consider Gore a non-expert on climate change but they haven't been asked whether Gore dreams about homicide yet.


Here is one of the videos that Al Gore prepared for his Climate Parody Day on September 14th, 2011. It features a strong lady who is clearly a climate skeptic, as indicated by her exhaust pipes. ;-) What happens with her on September 14th?

The original 1978 proverb It [or the opera] ain't over till the fat lady sings was used by sport (basketball) fans to keep their hopes until the last minute of a match but as far as I know, the lady has never been killed before. Also note that Gore's folks in the short film – the individuals with the wooden hollow skulls such as Mr Thermometer – don't even try to help the diva.

Well, instead of a red button and explosives, they use a model of the Earth that is loosely attached to the ceiling and that kills the female naysayer mechanically, in the old-fashioned way. Consequently, the murder is less graphic than the murder of the kids in the 10:10 No Pressure video. However, the result is the same: the climate skeptic "ends" on September 14th. The only difference is that "No Pressure" was released in 10/10 while Gore's movie is released in 09/11. The sum is the same in both cases.

Very funny, indeed. The quality of this movie is so high that I am sure that James Cameron had to be an adviser. You may also interpret the video as something else than a murder of climate skeptics: Gore apparently disagrees with the proverb "it ain't over till the fat lady sings". He thinks that the life on Earth is inevitably over before it is over, so you should always panic a few billion years before the Earth is burned. ;-)


Related: As of today, about 9,000 Facebook accounts have been converted to spam robots controlled by Manbearpig (about ten millionths of the Facebook accounts will be contaminated by Gore's delusions for 24 hours; 10 ppm is a huge percentage, Zuckerberg's life will never be the same haha) because their owners launched a special virus called Climate Reality Application. You may safely click at the previous link but be careful that you never click at "allow [Climate Reality virus]". Unlike most viruses, Gore's virus doesn't exploit any defect in the software and hardware of PCs but defects in the brains of their owners.


Another video by Al Gore admits that the global warming religion is a kind of a giant Rube Goldberg machine – a contrived sequence of hypothetical mechanisms and their hypothetical consequences and their consequences and so on with a simple goal – to increase the size of the government (which he could do by collecting sufficiently many left-wing voters, without all this dishonest and pseudoscientific nonsense about the changing climate).

Just to be sure: it's not coal that hits the fan. It's šit that hit the fan. Recall that the first episode of fifth season of South Park, It hits the fan, used Al Gore's favorite "šit" word 162 times.

In this case, the deniers are destroyed in the same way as birds that approach a source of green energy. By the way, if you are a bird that wants to fight against the wind mills, choose a less suicidal strategy.

Al Gore is pretty sure at this moment that these remarkable, deeply intellectual movies will win him another Oscar. So he has already shot another movie about how he was shooting the two amazing films above:

In this longer movie, we learn that the climate Rube Goldberg machine (which was only made possible by dozens of video tricks and heavy editing) is as robust as the law of gravity and that you are no longer allowed to talk about the weather without talking about the climate change at the same moment.

You must also say "God bless Al Gore (PBUH)" after each sentence. The prophet himself assures you that while you can repeal the laws passed by the Congress, you can't repeal the statements made by the prophet himself because every stupidity that Gore says is instantly promoted to a law of Nature.

I am very impressed by Al Gore the filmmaker and Al Gore the prophet, indeed. Unless an unexpected new frontrunner emerges somewhere, Gore is the top contestant in the Climate Parody Day.

Just look at the dozens of people who had to participate in the creation of these amateurish, would-be interesting movies that have 12,000 or 15,000 views on YouTube, respectively. Imagine how many millions of dollars have been thrown to the trash bin, how many fat screaming female musicians had to be killed during the shooting. Gore's videos are completely unoriginal, can't compare with the videos that inspired Gore (like Honda's Rube Goldberg device: I recently saw some equally good ones, not just the Melvin Machine, but forgot the URLs), and they really make no sense. Why is a Rube Goldberg machine used in a video about the climate? What point could it make (except that alarmists' arguments are contrived and extremely unlikely)? Those people are just not capable of thinking, capable of doing anything well. They're just low-quality people.

Al Gore's multi-million Climate Reality Project has become so famous that one of the Panasonic displays at the Times Square will show Gore's face on September 14th. It will be translated to 13 languages and I am sure that several if not dozens of people will watch him. The video above became so renowned that 700+ people have seen it: half of them came from the famous TRF blog. By the way, the video above is the only one posted by Gore where you may add your comments.

Just compare it with a generic video on YouTube, like my video of Smetana's Moldau whose budget was zero and that has 240,000 views at this moment. This is exactly the kind of thinking that Al Gore has never been forced to go through. He has never been forced to realize that he is a giant failure sucking the money of many people who has never produced anything useful or interesting in his life; that the dollar efficiency of his acts is about 1,000 times lower than what would justify Gore's survival.

His political background makes it easy for him to be on TV, too. To emphasize that his Climate Reality Project is just a parody, he will appear on Stephen Colbert on Tuesday, September 13th, a day before the Climate Parody Day.

Mediaite suggests that Al Gore is just wasting his time by the Climate Parody Day. I hope not. If he becomes more active than what we have seen so far, Wednesday could be the end of Al Gore as we knew it or him or her or whatever is the politically correct word. :-)

All the money available to Al Gore's lousy project is linked to the government, to subsidies, to his being a former vice-president. The same is true for all kinds of awards that are given by the green bandits to the green freeloaders from the money stolen from the taxpayers. Quality filters just go away.

I apologize to the readers who had to throw up because of the Eureka picture above.

Heil Führer. Picture taken from The Daily Climate, from an article that argues that Gore is the most authoritarive leader since Adolf Hitler and who vastly exceeds James Hansen and Bill McKibben.

By the way, Al Gore has announced that he plans 24 hours of a full-on assault on climate skeptics, exploring where they get their funding from. Cute. Too bad he probably won't focus on me because he would have to tell you that this TRF program has, during my life, been funded by the National Science Foundation, Harvard University, Harvard Society of Fellows, Rutgers University, four publishing houses in Czechia, France, and the U.S., the U.S. Department of Energy, a few dozens of places where I lectured (just the travel fees), a program run by Google Inc., and viewers like you. Thank you. :-) [Just to be sure, it's similar to the usual slogan of PBS about its supporters.] Claims that my funding makes me biased would sound extremely, comically convincing when articulated by the first would-be carbon billionaire. ;-)

The original article by Reuters is even more amusing. Manbearpig doesn't plan to kill us. The title says "Al Gore in 24-hour broadcast to convert climate skeptics". LOL! :-) That's a very appropriate wording for the religion of Rev Goracle and I wish him good luck to convert climate skeptics to this religion, or at least one of them (as a compensation for those millions of people he will lose on Wednesday). On the same day, Gore will also manage to marry a polar bear and place another infant son in rocket to escape dying Earth. And he will give anti-deniers interviews such as this one for a Washington Post blog. Al Gore was also chosen as the optimum and most knowledgeable speaker about the climate who will talk and talk and talk on Current TV; Current TV is famous for its ability to find the best experts in an impartial way: its chairman is Al Gore.

On Wednesday, Lucy Lawless will fight the deniers, too.

Unfortunately, her new chosen weapon is her brain and mouth and 15 minutes of fame produced by talking from New Zealand. That's a pity. Everyone should be trying to work with the tools she has mastered – and in her case, it's the muscles, not the brain, as this charming work she did in climatology suggests. ;-) 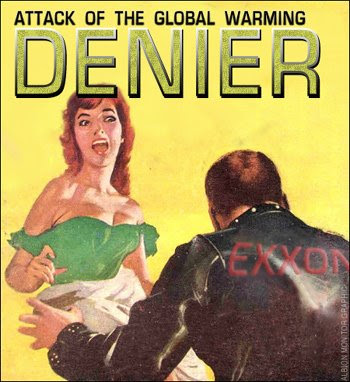 Dear reader, you are the evil vampire on the right side. Click the picture for more details.

Princess Xena is also a prominent psychologist. She has figured out that people running climate denial campaigns are sociopaths who don't want you to disconnect from their grid of pipelines with poison in them. So please don't forget to connect your mouth via the USB port and buy some poison from our grid of sociopaths. :-)

Meanwhile, various unknown lecturers hired by Gore will say that "the standard of living must level off" for the Earth to survive.

Meanwhile, Greenpeace has created a famous sketch by Leonardo Da Vinci on a piece of Arctic sea ice. The Greenpeace members were distributed along the big circle and asked to worship Gaia. One third of them drowned because one third of the picture was drawn on water. Greenpeace blames your SUV for the death of their comrades.
Luboš Motl v 5:05 PM
Share