According to the TRF census, the world population reached 7 billion five minutes ago.

Well, it could also take place several months ago or it will take place in several months in the future because the error with which we actually know the world population doesn't allow us to determine the exact day: the demographers just decided to claim it was today. Correct me if I am wrong but I am confident that the uncertainty with which we know the world population is at least tens of millions of people. 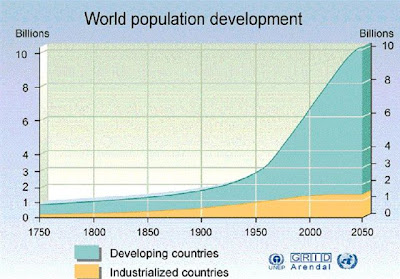 Most of the population growth took place in the poor world where people don't expect too high living standards for their sons and daughters so they're not afraid to produce them en masse. In fact, a fast reproduction which is hardwired in our instincts is a weapon to fight against the greatest misery they can imagine (while many of us can't), namely extinction.

In the rich world, the population growth is small if not negative, proving that the wealth is a disease. The recent recession has surely returned some health to the society and if God gives, we will get another dose soon. :-)

More seriously, we should think whether the disproportionately higher growth in the poor world is a problem. It's been always "illogical" in some sense but we have learned to understand that a high population in the poor world doesn't really threaten the rich world (it only threatens the preconceptions of the racists on one side and the egalitarian dogmas of the far left-wingers on the other side because this growth asymmetry surely enhances the concentration of the capital); the would-be rich rising powers (such as Iran) that are sufficiently poor in spirit are a greater threat. We have tried to help the poor world to become rich as well; it has only partially worked and the best results are obtained if the poor world helps itself, by introducing some basic infrastructure, capitalism, and incentives that encourage people to produce wealth.

On the other hand, I think that if the rich countries decided that they want to boost their population growth, it would be trivial to impose policies that would achieve this goal. I don't think that the government should intervene into such matters in normal circumstances such as those we see today; on the other hand, if you allowed such interventions, it would be rather trivial to accelerate the growth. There is nothing such as the "inevitable decrease of the Western population".

In this text, I primarily want to argue against the Malthusian and environmentalist pseudoscientific ideas claiming that 7 billion is close to the maximum that the Earth may feed or something like that. The people who are claiming similar things haven't learned a byte from the history, especially not from the failures of their forecasting predecessors. The population has been greater than what the living people could have remembered pretty much at every moment in the last 70,000 years, to mention a random number. Because of that, the population could look "highly above the average" to everyone.

A long time \(Y\) years before the year 2007, this curve behaves as \(C/Y\), a "hyperbolic" growth (the curve never produces an exponential growth for a significant amount of time even though we like to think that the "normal growth" is exponential). Around 13.7 billion years ago, this formula produces about 13 people in the world, presumably Jesus Christ and the apostles who lived before the birth of the Solar System (more seriously, Kapitsa claims the formula to be rather accurate up to the moment 70,000 years ago: that's why I have used this figure above, too). However, around 2007, with the typical time scale of 42 years, the growth slows down and the population approaches 14 billion in the asymptotic future. (More naive formulae expecting a hyperbolic growth at all times usually predicted the "singularity" to be reached around 2025.) Of course, this whole assumption about a stable (or dropping) future population may be wrong and I am inclined to think that it is.

Don't get me wrong: I am not going to argue that I would be much more happy if the Earth hosted many more people than those roughly seven billion people we are familiar with in the early 21st century. People steal space and sunlight from other organisms that may often be more pleasant for most of us, anyway. ;-) I like forests and other kinds of wild nature much like others. Instead, I am going to argue that it's very natural to expect that the population growth will continue. The annual increase of the world population is comparable to 1 percent these days: it was substantially faster decades ago. However, "we" may be close to 1 percent – or above 0.5 percent, to be more specific – for centuries.

We're entering into a speculative territory but it's clear that for a foreseeable future, it may be less speculative.

So let's start in the near future. A way to estimate a "limit" on the population is to consider a "role model" country such as the Netherlands. Its population density is 500 people per squared kilometer. Now, the area of the Earth's surface is 510 million squared kilometers. About one-third of it is land. Let's estimate that 1/3 of the land or 50 million squared kilometers may be used in a similar way as the Netherlands if people try a little bit (you may even argue that if I throw away 2/3 of the area – mountains, tundras, reservations etc., I am being wastetful). In this way, we still get the world population of 25 billion people. Now, I am not going to claim that we will see 25 billion people very soon; with the 1% growth we observe today, we expect this population in 128 years. But I surely do claim that the people who assert that there is an upper limit given by the laws of Nature that is much smaller than 25 billion people are self-evidently wrong. They're spreading pure anti-population propaganda that can't be justified by any rational arguments.

Those people will protest that the Netherlands sells and buys lots of products; indeed, its trade is very important for the economy, much like it is the case in many other countries including the export-oriented Czechia. And a sensible world will always do lots of trade. But from a fundamental viewpoint, the Netherlands is close to the average "fertile land" we may see anywhere in the world. With Czechia, where you find some mountains and other things, you may say that the country is representative of the whole land surface of the Earth. By extrapolating Czechia to the whole land mass of Earth, you still get the population of 20 billion. And Czechia still looks rather empty and unused if one carefully looks (visitors from as unpopulated countries as Australia are routinely telling me that even the Wenceslaus Square in Prague – a focal point of the Czech civilization – looks empty to them).

Some rather typical and perhaps edible crops produce 20 tons of biomass per acre and year which is 5,000 tons per square kilometer per year. Be generous and feed a human by 1.5 kilograms of biomass per day. You obtain 0.5 ton per year so a square kilometer may feed 10,000 people. Needless to say, that's more than an order of magnitude larger than the population density in the Netherlands. And I can tell you that some not-quite-edible plants produce not 20 tons but 60 tons of biomass per acre. One may see more than an order of magnitude of "spare room" in other quantities as well. The urban areas (cities) only cover something like 1% of the Earth's surface (if you look at the surface from an aircraft, you must appreciate how small we continue to be and how weak our light bulbs in the cities are) and so on, and so on.

Peter Thiel is already paying millions to a project planning to build huge libertarian ocean colonies. There's not a good reason to think that this idea can never become a reality. It will add another factor-of-pi boost to the upper limit of the world population. I hope that the people will give the ocean whatever its life needs.

Much of the life of the human society sketched above depended on the solar energy. When we increase the amount of speculations a little bit, solar energy ceases to be crucial – it ceases to be a constraint. If the people ever master thorium or thermonuclear reactors, and this may be the case in a few decades, they will be able to do things that would look insanely uneconomical today. For example, they will be able to build multi-story gardens over their territory or caves and cover each floor with some artificial "solar radiation" powered by the new and cheap source of energy. Well, we would still run out of thorium (which is enough for 8,000 years of "business as usual") if you wanted millions of square kilometers of new fields under the ground. ;-) But we won't run out of hydrogen if we master its thermonuclear power. With enough energy, the Earth may be rebuilt to a 10-story building covering the whole surface. ;-)

Of course, it would be much more fun to think about the growth of the world population assuming that many of us will live outside the Earth. (A modest goal is to plant a trillion of people on Saturn; we may also give them an artificial Sun by thermonuclear ignition of a Saturn's moon haha.) This is probably centuries away and I wanted to discuss the Earth's population so this is perhaps not even relevant for this article. What I want to say is that any claimed "inability of the Earth to host more than \(N\) people" fails to be a legitimate, rationally justifiable upper limit if \(N\) is smaller than 25 billion or so; instead, it is a declaration of the political intent to regulate the world population, a piece of anti-human and anti-civilization propaganda (that wants the people to "feel", without thinking, that we're close to "maximizing our sins" now), and it is simply immoral for people to claim that such declarations are the outcomes of a scientific analysis which clearly can't be the case.


Hardcore Malthusian crackpot Paul Ehrlich who had predicted in the 1970s that before 2000, two-thirds of the U.S. population would starve to death, has the breathtaking arrogance to show up in the public again. Not only that; he repeats his idiotic rubbish that the surpassing of the 7-billion-mark is a reason for alarm. "I think it's cause for a lot of alarm and so does every scientist I know," he incredibly says. That proves that he can't know a single scientist because no scientist could endorse such a preposterous, unscientific proposition.
Luboš Motl v 9:49 AM
Share