As you can see in the right sidebar, each of the major LHC detectors, LHC and ATLAS, has delivered 5 inverse femtobarns of collisions (which includes 0.04/fb from 2010: not too important at this point).

About 90% of the delivered collisions are recorded. It means that each team may work with 4.5/fb of data by now (which will surpass 5/fb in a week as well) and in combination, the "Big Two" may have lots of fun while analyzing 9 inverse femtobarns of data as of now.

You may translate 5/fb to the number of collisions: it is about 350 trillion collisions because 1/fb corresponds to 70 trillion collisions. The latter proposition is equivalent to the fact that the proton-proton cross section is 70 millibarns – which is the same thing (if you rename the unit) as 70 trillion per inverse femtobarn. Recall that milli- is \(10^{-3}\) and [divided by] femto- is \(10^{-15}\) so milli- gives you a trillion, or \(10^{12}\), per inverse femto-. 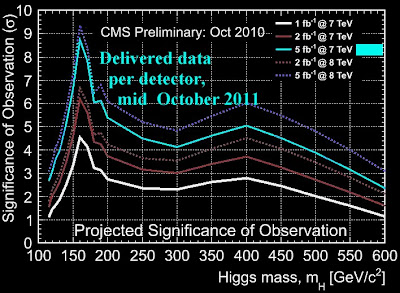 It is a good opportunity to recall what is the expected significance of the accumulated evidence for the Standard Model Higgs boson. Look at the full blue-green bright line above which is 5/fb at 7 TeV. Let's choose four benchmarks and write the significance that should be obtained by now by a single detector. At 4.5/fb, we have:
These numbers are similar (but not identical) for the lighter Higgs boson in a two-Higgs-doublet supersymmetric model because the lighter Higgs boson behaves similarly to the Standard Model Higgs boson. Don't forget that the significance levels are mean values themselves; depending on whether "chance" increased or decreased the number of Higgsful and Higgs-like events, the observed significance may be higher or lower than the figures above.


If the experimenters decided to combine the ATLAS and CMS data, they would have 9/fb of data which is \(9/5\) times higher than the numbers above so the statistical significance will be \(\sqrt{9/5}=1.34\) times the numbers above. The statistical significance that the (combined) LHC may obtain for the Higgs boson signals now depends on the Higgs mass as follows:
You may see that if the physicists are allowed to look at the newest data, pretty much any Standard-Model-like Higgs boson can be discovered or nearly discovered at this point.

If there are multiple Higgs bosons, the lighter one is similar to a single SM Higgs but it may be easier to detect it in the triple-bottom-quark processes because its coupling to the bottom quarks is probably enhanced. The heavier Higgs boson(s), if there exists more than one, may be somewhat harder to be found but not too harder.

The right sidebar also says that the peak luminosity achieved so far (per detector) is 3.5 inverse nanobarns per second which is – by a simple change of units – 110 inverse femtobarns per year. Of course, the maximum luminosity can't be sustained for the whole year 2012. The luminosity decreases to 1/2 within hours and there need to be breaks every day and sometimes breaks that last for days. Moreover, not all 12 months are reserved for proton-proton collisions: there is a winter break as well as lead-ion run etc.

With all these factors included, about 1/6 of the optimistic figure or about 18 femtobarns (per detector) may be achieved in 2012 itself. That would combine to more than 23/fb in 2010-2012. That's surely more than enough for any Higgs question – as well as many other questions that are relevant if Nature generously offers some low-hanging fruit to us. The figure 23/fb may be improved (and maybe vastly improved) if the LHC engineers manage to (greatly) increase the luminosity during 2012 (or at the end of 2011).


By the way, a Dutch physicist has just published a preprint saying the same thing as your humble correspondent, namely that OPERA could have gotten an error of 30 nanoseconds, one-half of their claimed signal, if they incorrectly used synchronization from the viewpoint of the satellites' moving frame.

So yes, 100% of the preprint is derived in a paragraph of my blog entry published weeks ago.


Meanwhile, in Santa Barbara, string theory soccer players were painfully humiliated by squalid state physicists, 0-to-5. It's plausible that David Gross will have to resign as the couch.
Luboš Motl v 11:05 AM
Share