CMS sees a trijet and nonajet excess, too

On Thursday, I mentioned a general excess of trilepton events observed by the CMS Collaboration. It may be fair to mention that I realized once again that besides three leptons, the CMS also sees some excess in events with three jets and nine jets. 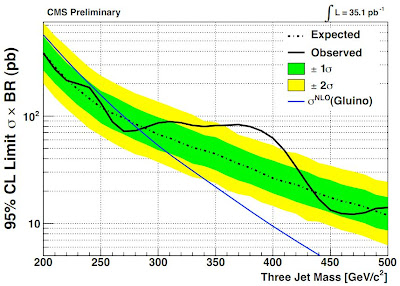 Yesterday in Berkeley (LHC SUSY Search 2011), Eva Halkiadakis of CMS showed a graph that is pretty old by now but many of us haven't seen it yet.

It uses just the 2010 data, 35.1 inverse picobarns, but it shows an apparent trijet resonance which exceeds 2 sigma between 350 and 410 GeV. The center is around 380 or 390 GeV and reaches 2.8 standard deviations. However, with the look-elsewhere correction included, the statistical significance is just 1.9 sigma.


In the supersymmetric context, the most straightforward interpretation of such a signal if it survived would be a 380 GeV gluino decaying into three quarks but you need an R-parity violating model because there's no missing energy (no LSPs that would carry the negative R-parity and that would carry energy away in a hidden way). The CMS paper was already published in PRL in late August (arXiv: July).

One of the few papers that mention this CMS paper from the summer is the following paper:


Has SUSY Gone Undetected in 9-jet Events? A Ten-Fold Enhancement in the LHC Signal Efficiency

They discuss the excess seen by the CMS in the nonajet channel. You may see it neither in the octajet channel nor in the decajet channel and the undecajet, dodecajet, and higher channels are already predicted to have at most one event. Nonajet is such a nice word but immediately when I will post this blog entry, it will become the #1 Google hit for "nonajet". People are missing pearls around them. :-)

The authors of the paper above suggest that a region of the SUSY parameter space may not only agree with the available exclusions but it may also naturally explain some tantalizing hints. Their F-theory-inspired no-scale flipped SU(5) model also predicts the Higgs mass between 119 and 123.5 GeV. The superpartner masses are pretty sharply predicted – and it's kind of amazing how low superpartner masses remain compatible with the exclusions the LHC has so far offered:
For your terminological convenience, let me list the Greek prefixes up to 12 haha:
You will surely find many cute words that start with these prefixes, e.g. the dodecahedron. Isn't it cute when Greek no longer sounds Greek to you? ;-) Anna is an exception: Greek will always sound Greek to her.
Luboš Motl v 8:07 AM
Share