D-branes' fields are made out of open strings


As I understand it from the threads I read, D-branes are viewed as somewhat secondary to strings: If I know what all the open strings do, then I know what the D-branes do as well. But if the D-brane is a "big" and higherdimensional object, then there should also be a part of its surface, which is not covered by strings ending there.

Why or how is the whole thing still characterized by the strings? Do the moving string ends drag the D-branes with them? Is there something like a Lagrangian and dynamical rules for the D-branes alone? Do I only need the D-brane after quantization and/or is there a classical concept of it? In the former case, does a classical limit of a D-brane and an effective action for it make sense? What is the precise reason one doesn't write down Lagrangians for non-point particle/non-string/non-field quantities?

Much like in the case of the spacetime itself, you may write low-energy effective quantum field theories for D-branes. The most popular effective action for a D-brane that one encounters in the literature is a non-linear generalization of Yang-Mills theory known as the Dirac-Born-Infeld action which is also coupled to extra scalars, and so on. It describes essentially everything at long distances, regardless of the shape of the D-brane, as long as the curvature is low etc.


But this action breaks down at short distances or high energies, comparable to the string scale, because there are other massive excitations living on the D-brane and their interactions which modify the dynamics. You may try to describe all those things accurately (at least to all orders in perturbation theory in \(g_s\)) by string field theory in the D-brane world volume but even if you do so, you're brought to my main point:

So it is really incorrect to imagine that the degrees of freedom of D-branes are independent from the stringy degrees of freedom, i.e. that they're independent objects. They're not. D-branes are topological defects which play the same role as solitons in quantum field theory as long as the degrees of freedom carried by strings ("string fields") are considered analogous to the normal fields in a quantum field theory. A TV example of a soliton is the magnetic monopole which may be represented as a classical configuration – a solution – in which the electromagnetic fields have certain values (and a topologically nontrivial "charge"). In this sense, the magnetic monopole is "composed" out of excitations of the electromagnetic field. Such objects, solitons, are usually much heavier than the "fundamental" objects when the coupling constant is weak; and the same thing holds for a low \(g_s\) and D-branes (solitons of string theory).

In the same way, D-branes are solitons in the closed string fields, including the Ramond-Ramond \(p\)-form generalizations of the electromagnetic field. And all their excitations are (paradoxically, by the open-closed duality which boils down to the fact that the annulus and cylinder shapes are equivalent) equivalent to open string states.

So let me try to convince you that you should adopt a very different philosophical picture of what the D-branes actually are. First, consider gravity. It is a part of string theory and in perturbative string theory, gravitons always arise from the massless states of closed strings, right?

In this sense, all the degrees of freedom \(g_{\mu\nu}\) in the spacetime fail to be "independent objects" or "independent fields" or "independent degrees of freedom" from strings. They are literally made out of closed strings. Any gravitational wave, a classical perturbation of \(g_{\mu\nu}\), is equivalent to the coherent state of closed strings in the graviton mode. All these fields are "built from" closed string degrees of freedom. Assuming that you choose the name "vacuum" for the appropriate state in the Hilbert space describing spacetime in string theory, any other state in the Hilbert space may be obtained as a linear superposition of extra strings' creation operators acting on this vacuum (and it doesn't have to be "the right" vacuum).

The D-brane situation is fully analogous. Imagine a flat D8-brane at \(X^9=0\). You may change its shape by making \(X^9\) slightly varied as a function of the remaining 8+1 spacetime coordinates. Such a wave will propagate by the speed of light. The field \(X^9\) is a scalar field on the brane. 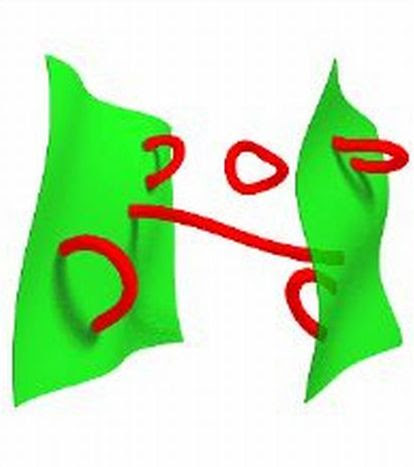 This picture created by  Steuard Jensen and brought to the broader world by David Tong suggests that aside from open strings connecting the D-branes, the D-branes may also independently wiggle. But the D-brane wiggles (and everything else occurring inside them) are actually made out of the same open strings.

This hegemony of fundamental strings is only violated if you try to go beyond the perturbative expansions. Because of S-dualities, one may be sure that in some sense, all D-branes and other branes are equally fundamental as strings (e.g. F-strings are exchanged with D1-branes in type IIB string theory). But there is no known explicit calculation-ready formalism that would make this "brane democracy" manifest. Instead of this democratic description, we possess various desciptions such as expansions around various limiting points. The expansion around \(g_s=0\) is always dominated by strings and their degrees of freedom and everything else seems to be composed out of them. (The CFT description of an AdS/CFT system has different, more braney fundamental degrees of freedom; in this case, the excited stringy states are made out of these gauge-theoretical, D-brane-like degrees of freedom.)

That's also why D-branes don't bring any ambiguity or uncertainty to the dynamical rules of string theory: there is only one string theory and it is unique. The addition of a D-brane means that the background is a non-trivial solution for the closed string degrees of freedom and all the dynamics around this solution is dictated by stringy diagrams. That's surely a good property of string theory – and a necessary for one a truly unifying theory.

If you tried to find independent D-brane Lagrangians describing everything that have nothing to do with strings, something I just told you doesn't exist, you would face another problem: all such hypothetical world volume theories would suffer from the same short-distance (UV) problems as quantized gravity without strings. Strings whose world volume is 1+1-dimensional are unique among all objects you can think of because their dimensionality is high enough so that the shape of the world sheet may create topologically nontrivial and therefore interacting histories (pants diagrams etc.); but it is also low enough so that all potential UV problems in the world volume (namely world sheet of the string) are under control.

That's not true for higher-dimensional objects (whose UV problems are analogous to those of quantized general relativity) so there can't be any "membrane or higher brane theory" that would share the same consistency standards with string theory. As we know, other objects of various dimensions exist in string theory but whenever strings are used as fundamental ones, the others can't be fundamental at the same moment. The hegemony of strings in the perturbative description is not only a symptom of the uniqueness of string theory and its being a "theory of everything" but it is also necessary for the finiteness of the theory. Whatever isn't made out of strings would create UV problems comparably severe to those in non-stringy quantum gravity.
Luboš Motl v 7:31 PM
Share