EU carbon allowances dropped by 40+ percent since May

Some TRF readers are surely investors so they have noticed some motion in prices in recent months, mostly due to the Greek hysteria. Some stocks went down by 20% in a few months although others, including the U.S. stocks, have almost returned where they have been.

If you think that those drops are significant, you should notice that some "commodities" have dropped more violently, obviously not only because of Greece. If you look at PointCarbon.COM, you will see a largely decreasing graph for the price of EUA, the main European Union allowances, that was fluctuating around €10 per ton of CO2 in October (the price of sCER is about €7: I don't understand what prevents people from converting one "carbon currency" to the other and earning €3 per ton along the way).

As Reuters noted yesterday, this represents the drop of more than 40 percent since the end of May: the prices got multiplied by a number smaller than 0.6, no kidding.


I really find the idea of the emissions trading childishly demagogic. It is meant to resemble the free markets so it superficially looks like a capitalist mechanism. However, the whole goal of all the players in this "market" is to help the governments and unhinged and uncontrolled international bureaucrats to realize an arbitrary plan for the magnitude of the CO2 emissions. In other words, one may deconstruct "cap and trade": the "trade" part is indeed capitalism-based but the "cap" part comes from a hardcore communist planning paradigm and it is the primary one. So it's just like Stalin's five-year plan (or 100-year plan) in which the people are allowed to bet their money on whether or not Stalin's plan was an underestimate or an overestimate of what the economy will actually do.

If the CO2 were causing a detectable damage to the environment of the planet, which we don't believe to be the case, we should simply calculate what this damage per one ton is and people should pay the corresponding fixed fee. If a damage takes place, it clearly occurs gradually, continuously, not only when we "suddenly" surpass an arbitrary threshold defined by central planners (the point of crossing such thresholds can't even be accurately measured and the idea that there are any sharp thresholds near 400 ppm of CO2 when something really changes is utterly unscientific in the first place). But none of the advocates of the carbon planning dares to present a calculation of the hypothetical damages caused by a ton of CO2 because he would obviously end up with an extremely small number. Moreover, the sign would show that CO2 is beneficial, not harmful. So all of them prefer un-quantitative, quasi-religious claims about infinite damages caused by undetermined amounts of CO2.

The trading of carbon indulgences isn't really a sustainable activity. If you applied the same methodology of extrapolation to the recent price dynamics that the climate alarmists apply to temperature graphs and many other things, you could say that the prices of carbon permits are dropping exponentially with the half-life of about 6 months – or the lifetime of about 9 months; the latter is the time during which the price of your investments into the fraudulent carbon indulgences drops 2.718 times. For people in such a highly unstable, quickly diminishing industry who are going to get broke in a year to claim that they care about sustainability and they plan how the planet Earth should work and redistribute resources through 2100 or beyond is particularly ludicrous. 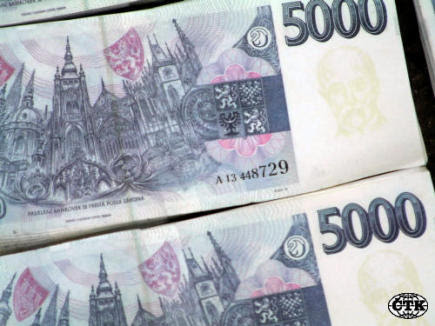 Concerning the differing prices of the carbon credits, I must mention that there has been a somewhat sophisticated fraud described in the Czech media yesterday. A woman employed in a bank cut CZK 5000 banknotes for CZK 440,000 (USD 25,000 or so) into pieces. Before a law about the value of damaged banknotes was changed, she deposited quarters of the banknotes and received a quarter of their value for each: in total, she got CZK 110,000. Then the law got changed and she received the full value CZK 440,000 for the remaining 3/4 of each banknotes, in various banks, making a CZK 110,000 profit. ;-)

Even though this looks almost legal, ;-) she is investigated, anyway.

Meanwhile, Al Gore believes that Richard Muller's "Koch-funded" study will persuade skeptics to accept Al Gore as their only holy prophet and help to press the remaining deniers such as president Barack Obama to introduce a carbon-free Heaven on Earth. Drugs are nasty chemicals, indeed.

That's a pretty nice luxury car, isn't it? It's called Fisker Karma and is relatively cheap, $95,000. U.S. President Barack Obama bought it for Leonardo DiCaprio, for the taxpayer money. Al Gore and Colin Powell will get theirs, too. Subsidies for Fisker, an electric carmaker, are meant to be another Solyndra, due to the amazing success of the latter.