Gore lost the Guardian: weather not caused by humans

Al Gore thinks that unpleasant weather events are caused by humans, namely by evil witches who are telepathically connected to the evil Big Oil and who should be burned at stake in a carbon-neutral way waiting to be discovered. Last week, he said that scientists have a "clear proof that climate change is directly responsible for the extreme and devastating floods, storms and droughts that displaced millions of people this year." 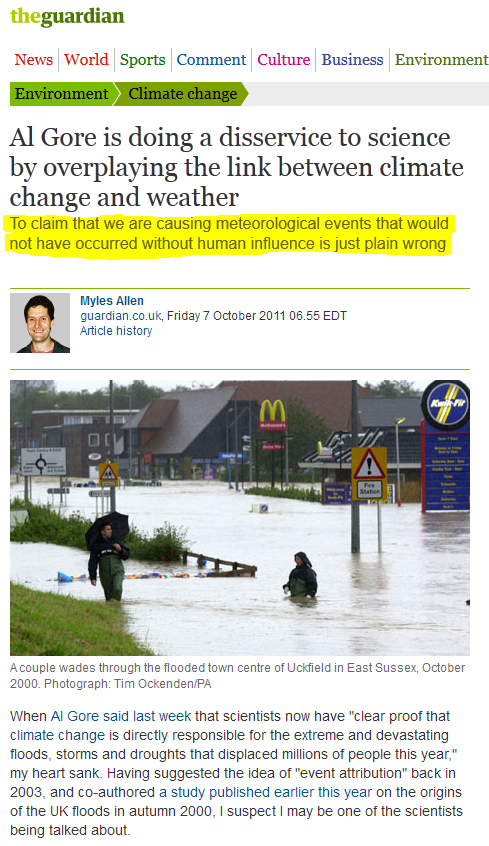 Can you actually find a scientist who would be suggesting such a link?


You may look for for scientists who suggested such a link as a working hypothesis years ago. What will they tell you about Gore's statements? Dr Myles Allen is a textbook example of such a scientist and he says:


Myles Allen has co-authored papers such as "Human contribution to the European heatwave of 2003" but he says that the link is just "plain wrong", as the subtitle in the Guardian says.

There is no theoretical or empirical evidence that would indicate that certain kinds of weather events wouldn't occur at all if there were no humans. But more importantly, there isn't even any evidence that anything unusual is happening about the weather events. This is a point that a remarkably high number of people, including those that call themselves skeptics, still misunderstand.

Thermometers show that during the last century or last 40 years, the global mean temperature changed by 0.6 or 0.4 °C or so. So this innocent and artificial quantity did see a change: its causes remain questionable. However, there is no analogous observation that would indicate that the total precipitation is changing, the frequency of hurricanes, tornadoes, droughts etc. is doing something else than what it has been doing for millions or billions of years – namely to fluctuate.

The media are more efficient in making "stories" out of every rain and wind and we're bombarded by all these stories – it's much easier to spread them in the modern Internet era – but the actual underlying events haven't qualitatively changed. And there's no reason to believe that they should have changed. All meteorological events depend on some kind of gradients, fast changes of pressure, humidity, and so on, and "global warming", even if you accept that it makes sense to use this term, only very slowly changes the overall average temperature so it can't have any detectable impact on the statistics of meteorological events.

People should notice that the actual scientists - including those that are supposed to be the ultimate source of Gore's bold proclamations – admit that Gore's propositions are just plain lies. And people should realize that it's not just Al Gore who is a chronic liar: they should spend much more time by checking and rechecking statements done by many other people or all people. Folks, you just shouldn't be mindless sheep!