You may still vote but let me declare the following numbers to be the results of the poll: 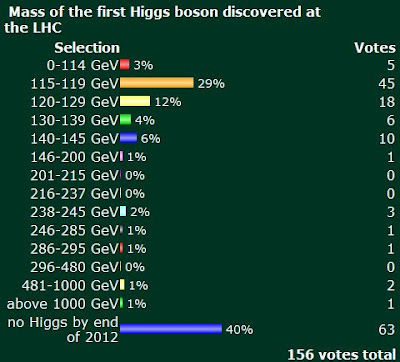 The Higgs skeptics received 40% and became the largest group. And yes, I do realize that most of them think that the Higgs will never be found: I am not deaf but they're wrong. ;-)

At least one of the largest groups had a sensible point but none of them is right if you want to know in advance. ;-)


Obsolete text from the morning when the poll began:

It's likely that by the end of 2012, and maybe even before Christmas 2011, the LHC will announce the discovery of the Higgs boson (or "a" Higgs boson).

In this poll, you are asked about the central value of the first Higgs boson rounded to the nearest integer and reported as having at least "evidence" in a publicly accessible paper by CMS or ATLAS by the end of 2012: there's also an option that there won't be any Higgs boson by then.


I have chosen the intervals so that they have comparable chances according to the data I know, including modest hints of the Higgs existence at various points.

A completely off-topic commercial promoting "Golden Pheasant" (Zlatý bažant), a popular Slovak beer (their bottles and logos are designed to be confused with Pilsner Urquell), with lots of funny comments about the national character of various nations, especially Slovakia:

To build an accelerator, it's the European way. Not to be in any hurry, it's the Slovak way.

To want to borrow from everyone, it's the Greek way. Not to want to lend to Greece, it's the Slovak way.

To go out with your friends in the evening, it's the Slovak way. But to have the Golden Pheasant with them, it's the global way. 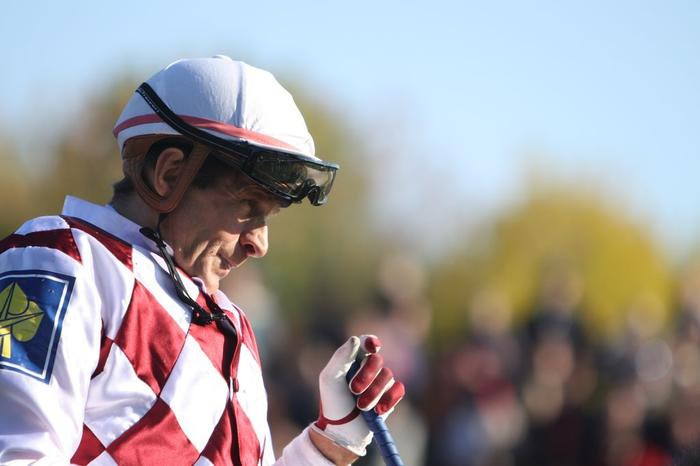 In ten days, the athlete who has suffered from roughly 137 injuries and multiple deaths so far will celebrate his 59th birthday. So what was the result today? Yes, as the readers familiar with integers and mathematical induction could have expected, he won for the 8th time although this outcome was far from clear even half a minute before the finish. The 59-year-old athlete was considered the top dog: the bookmakers' odds were just 1.8 for his victory.

It's also a success story for his horse, Tiumen, who won for the 3rd time, pretty much matching the legendary Železník three decades ago. Klaus was also competing (as a horse) but he was the last one for quite some time and dropped out of the race after a horse accident. ;-)
Luboš Motl v 8:11 AM
Share