Around 3 a.m. in the morning, the European politicians have agreed to boost the "eurowall" EFSF fund to something like €1 trillion and to demand that banks raise some extra capital, to reach 9% for the core Tier 1 capital ratio. About one-half of the Greek debt to the private subjects (1/2 of €200 billion) will be erased in a controlled default procedure; the debt to official public institutions such as the IMF (all of additional €150 billion) won't be reduced. So the debt will only decrease by €100 billion. Slovakia managed to avoid any further payments to Greece.


Needless to say, I don't think that this is a permanent solution to Europe's problems; at most, it is a solution to a short-term problem paid by a system of rules that will hurt Europe in the long run. I don't think that the haircut is sufficient to restore the Greek balance in the long run or to force the country to manage itself in a sustainable way.

Congratulations to Slovakia that successfully avoided another wave of wasting of the money. In this way, Slovakia has shown that it does feel similarly as Mr Richard Sulík, a new European libertarian hero who didn't want anything else than an opt-out, after all (even though the number of thoughts and principles he offered was much more extensive).

This opt-out is just a minor example of clear successes of Slovakia's Prime Minister Ms Iveta Radičová. Nevertheless, she recently said that she wouldn't run in the next elections because she considers the recent years of her political career unsuccessful. It's just terrible if this is how one of Europe's most successful, responsible, and sensible prime ministers feel. 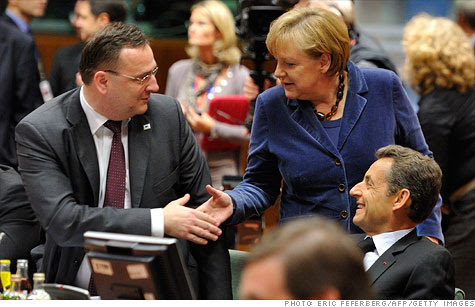 Czech prime minister Petr Nečas congratulates Angela while Nicoleon is smiling. All of them may be relaxed in this particular situation: Czechia, an out-of-eurozone country, doesn't pay a penny which is good both for us as well as for our frequently nervous EU partners. Picture via CNN.

I agree with our finance minister Kalousek, the best emerging European finance minister of the year 2011 as well as 2008 – in fact, he is so good that he recently managed to slap an arrogant left-wing teenager on the street. All arrogant left-wing people should be constantly educated in this way or a more stringent way; at least, we should try. ;-)

Finance minister Mr Miroslav Kalousek doesn't consider the agreement on the erasure of one-half of the Greek debt to be a final solution. He thinks that the key question will be how successful the recapitalization of the European banks will be. "For many governments, it may be an insurmountable problem," Kalousek said in an interview for iDNES.cz. We are at a big risk that banks will lose their desire to give loans. 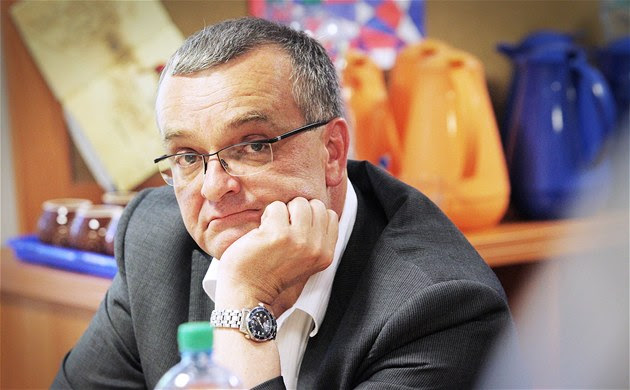 Eurozone leaders agreed that €100 billion from the Greek debt will be forgiven. What kind of news is it for Czechia?

Not only for Czechia. It's surely not a final solution, just one step in the search for a solution. The current problem we face is the situation in the banking sector and the required recapitalization which may be a serious problem for many of them. Especially for those that possess Greek bonds that will lose one-half of their value soon. Our consistent position has been that these banks must primarily help themselves in the market conditions which may be an insurmountable problem for some of them. The next key responsibility rests upon the national governments. Only when this layer fails, pan-European solutions may be considered; however, they're still not fully agreed upon. Neither their conditions nor the mechanism by which the EFSF would participate in the recapitalization of the private banks is clear. If the markets want to be calmed down, they should be given this information and we don't have too much time to waste.

Returning to the the erasure of one-half of the Greek debt: Isn't it news that may encourage everyone who behaves as if the debts wouldn't have to be ever repaid?

The moral hazard included in this operation is unquestionably enormous. However, the erasure is also connected with such a loss of prestige that the given subject in debt [Greece] really won't benefit out of it.

When banks in the EU won't be successfully recapitalized, it will affect the Czechia's export-oriented economy, too.

Banks in the EU are required to satisfy, by the middle of 2012, the condition that their available capital reaches at least 9% to be adequate. While we don't pay with the euro, tell us how it looks from the Czech banks' viewpoint that are not directly affected but that are usually owned by foreign banks that are affected?

This is not just a problem of Czech banks. Czech banks are in a very good shape even though many of them are daughter companies of foreign banks whose condition isn't as good as the daughters' condition. The Czech banks are supervised by the Czech regulator, the Czech National Bank. And ČNB has a sufficient power to prevent the parent companies from moving positive assets between the parent and daughter companies in either direction. Nevertheless, it's true that if the recapitalization of many major European banks won't be successfully achieved and solved, Europe may be facing a serious, long-lived financial crisis which would also spark a crisis in the real economy. And that would substantially affect the economy of Czechia, its GDP growth, employment rate, and living standards.

To obey the condition of an adequate capitalization, they will have to look for the money but they may also partly reduce their activity in giving loans which could also impact Czechia. When the intensity of borrowing slows down, Europe may be directed towards recession.

We are already observing it. Our prognoses which will be published next week confirm it. The lending activity has decreased due to the high anxiety in the markets. When the lust to lend the money goes down, so does the business and investment activity. This is something we are already feeling. If we experience a serious systemic financial crisis, it will be much worse. This risk obviously exists and is rather large. It boils down to the question whether the recapitalization of banks will succeed.

I have understanding for Slovak politicians, Kalousek says

How do you comment on the Slovak decision to fight and win an opt-out so that it is the only eurozone country that doesn't have to increase its contribution in EFSF?

I have a deep understanding for the Slovak politicians who have a hard job to explain to the people why Slovakia should contribute to the higher Greek pensions and higher Greek public sector employees' salaries. I have empathy for this attitude even though I feel that we may be entering an era that will force us to unify ourselves rather than to isolate us from each other.

Next week, the lower chamber of our Parliament will be approving the budget and you have already warned that the Czech economy's numbers will be weaker than you expected when you were proposing the budget. When will you present the proposals for another wave of cuts and perhaps also plans to increase the taxes in order to avoid an even higher deficit?

On Monday, we will publish the October prognosis which will be visibly worse but it won't necessarily have to determine the final numbers for the next year. Those will also depend on the eurozone's ability to convince the markets that the banks will be recapitalized. We will be able to come with a much more certain template of the amendment of the budget or with some well-defined austerity measures in February or March. At that time, we will be able to give a more honest estimate of the evolution of the economy and the expected revenues. Before this time, it might be a pure speculation. 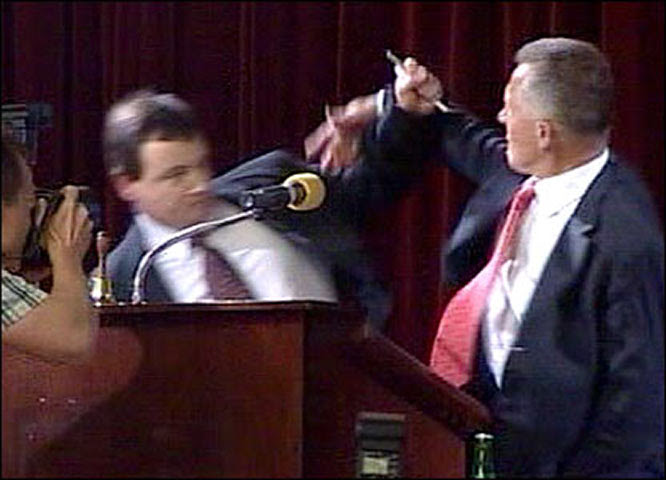 This punishment (video) of Dr Rath, the then Czech health minister and a social democratic jerk who moreover spreads lies about other people's families, by Dr Macek, his right-wing predecessor, at a Prague meeting of dissatisfied dentists has made it to The Guardian's top 7 punch-ups today. Congratulations to Dr Macek. He had to pay a $5,500 fine for that but it was a good investment.
Luboš Motl v 3:00 AM
Share