The polar bears are the most important examples of species that are supposed to shrink. A special disclaimer for RealClimate.ORG readers: this polar bear is small because it is a baby, a cub called Knut (who has already died).

They reached the conclusion after they "studied fossils". We don't learn much more about their methodology that would go beyond this irrational statement. Take, for example, this article in The Washington Post. We are told that the organisms are shrinking because the fossils say so. And we are also told that as the temperatures get higher, the weather gets drier.


Except that both of these statements are uncorrelated with the truth, to say the least. First, a warmer weather or warmer climate surely don't mean a drier weather or drier climate. There is no statistically significant observation of a global change in humidity over the 20th century. People in Brazil will surely confirm that a warm climate may be very wet. Sahara is dry but it's not a consequence of the warmth. It's mostly due to other things.

And what about the fossil records? Look at the bottom of this TRF page that discusses some basic features of geological periods in the most recent 542 million years.

The warmest period was right at the beginning (we've seen cooling afterwards): in the Cambrian (542-488 million years ago), the CO2 concentration was 4500 ppm, more than 10 times higher than today, and the global mean temperature is estimated to be at 21 °C, the warmest one in the last 542 million years.

(If you think that this elevated CO2 combined with elevated temperature shows some obvious CO2-temperature correlation, let me notice that the CO2 concentration in the Ordovician that followed, 488-444 million years ago, was 4200 ppm i.e. almost equally high but the global mean temperature was 16 °C, within 1.5 degrees Celsius from the current ones.)

What kind of animals would live here during the Cambrian? Well, we had lots of trilobites that were pretty small. So the correlation works. 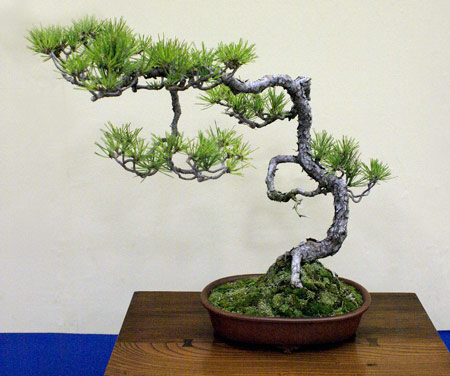 Kyoto is where the Kyoto protocol was signed but they still lost the fight against global warming: look at this tiny shrunk pine in Kyoto. Not only the pines are shrunk (they call it bonsai) but even the Japanese people's bodies are shrunk due to global warming. ;-)

Now, jump to the Jurassic, 199-145 million years ago. Around 1950 ppm of CO2 in average was combined with 16.5 °C global mean temperature which is still significantly higher than today. What kind of life could the Earth see? Well, we used to have dinosaurs, among other things, which were pretty large, you know. So very large animals are not incompatible with a warmer climate (than today). After all, we know that the climate zones are not excessively correlated with the size of animals, anyway. Polar bears are large and live in the Arctic but you may find similar or larger animals such as elephants who live in the warmer zones. The polar bears are larger than brown bears because they must store more energy: it's harder to find it in the inhospitable Arctic places.

The correlation just doesn't work or is too noisy. And indeed, there is no good physical reason why it should work well. We could argue that the Earth's gravity determines the size of the animals because this size may be maximized so that the bones may sustain the weight: planets with a stronger gravity would produce smaller animals in average. We may also say that for small animals on Earth (and, more generally, animals with a small surface-to-volume-ratio, because of air friction), gravity is negligible. However, the temperature is a different issue. Animals want to shield their bodies against the thermal exchange with the environment. This may be harmful both if the environment is warmer than your body or cooler than your body.

If you have 85 minutes, you may watch "Journey to the Beginning of Time", a 1955 Czech movie about a gang of boys who visit the prehistoric era. They saw lots of big animals and the birth of fossil fuels, too. Press "CC" (make the button red) for English subtitles.

If you're a large animal, your heat capacity may help you to ignore an unpleasant temperature around you for a longer time: the volume-to-surface ratio is larger for larger animals (it scales like the diameter). On the other hand, if your environment is very warm, near your working body temperature or higher, it's easier to sweat if your surface is larger. However, this may be achieved by a different size or a different shape of your body. Moreover, different animals have different optimal operating temperatures, too. Small animals may also find it helpful to maximize their surface-to-volume ratio if they want to fight against freezing temperatures: a relatively large surface is good for the absorption of solar radiation much like it's good for fast sweating.

There are many factors that play a role and if you summarize them, you won't see any discernible impact of the temperature on one particular species and surely not on the set of all species on Earth. Many of them also respond to a temperature change by moving to different latitudes or altitudes or elsewhere so they won't personally experience any change of the environment. And even if there were a detectable "signal" in the influence of the temperature on the body size, what's wrong with such adaptation? There's nothing wrong with animal bodies that are larger or smaller. If you care about souls, even small animals or humans may be equally great spiritually as the large one, or greater. If you care about the meat, you may compensate a smaller body size by growing a larger number of the animals. In either case, there would be no problem. ;-)

Similar awkward speculations building upon a shaky sequence of a large number of uncertain if not preposterous "links" and requiring everyone to ignore hundreds of other, usually more important relationships are literally thriving because various government agencies have been hijacked by parasitic left-wing pseudoscientific types who are happily receiving unlimited amounts of money for their bogus research. This is the actual "ecological" stuff that should be studied by government-funded institutions: the growth of the parasitic, useless, and scientifically worthless pseudoscientific research which is allowed because there are no adults in the management of science in most countries of the world.

The childish storytellers such as the "polar bears are shrinking" cranks are home alone and the results correspond to this fact. I've heard a (moderately skeptical) person suggesting that rational people i.e. skeptics should be writing papers debunking all these papers about the hypothetical warming and its speculative consequences. I totally disagree. The amount of this pseudoscientific activity should drop instead of increasing so everyone who takes this pseudoscientic research so seriously that he writes more than a dismissive blog entry about it is a part of the problem. Moreover, there can't be any formal competition here: the "polar bears are shrinking" types are producing this stinky garbage because they're paid billions of dollars. They make their living out of this junk. So we're drowning in hectoliters of liquid feces produced by climate alarmists and similar irrational and corrupt dimwits. The rational people don't get a penny and they have much more important things to do than to browse through one of the hundreds of piles of "polar bears are shrinking" feces that are being produced by thousands of corrupt diarrheous as*holes for stolen taxpayer money every week.

I find it highly offensive if someone suggests that I or someone like me should be personally wasting his time by going through the piles of crap produced by one of those thousands of unhinged alarmist idiots who are obsessed with producing nonsensical stories how the Earth will suffer unless we manage to kill the industrial civilization.

The American Geophysical Union (AGU) gave its first $25,000 prize for climate science communication to a notorious alarmist, liar, and crackpot working for RealClimate.ORG named Gavin Schmidt. Who is behind the decision? It must be someone in the board of directors of AGU whose role is to decide about the science communication matters, right? Who is that?

This member of the board is no one else than Chris Mooney, a far left-wing ideologue who has only studied English. This is such a breathtakingly flagrant corruption, distortion of science communication, and misappropriation of the taxpayers' money that I have to repeat Hillary Clinton's conclusion: these thugs are wanted dead or alive.
Luboš Motl v 9:27 AM
Share