Best case yet for the end of climate skepticism

The belief in man-made global warming resembles religious systems by many of its features and sometimes one has to smile how childishly naive the belief of many people has to be. 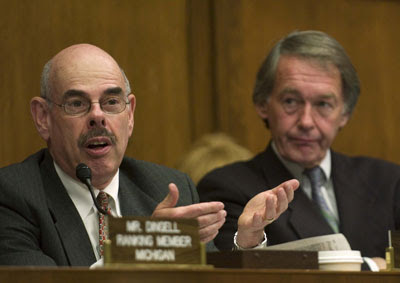 Waxman and Markey. The former Gentleman has installed a new special CO2 detector into his nose.

Two U.S. lawmakers, Ed Markey (D-Mass.) and Henry A. Waxman (D-Calif.), have invited three people to the U.S. Congress to terminate the global warming skepticism tomorrow, on Monday. The three people are Dr Richard Muller who wasn't a skeptic before he decided he was a former skeptic but he had never been a former skeptic, Dr Ben Santer who will beat crap out of a climate skeptic during the next conference according to his most famous publication, namely a ClimateGate e-mail, and Dr William Chameides, a relatively unknown career alarmist affiliated with several institutions.

But you have to appreciate their optimism:


However, now, a few weeks later, Dr Richard Muller just enthusiastically agrees with yet another event in which his results – which don't bring anything qualitatively new to the climate debate – will be presented as the case to end the climate skepticism. To err once is human, to err twice is an accident. But I think that now it should be enough for Dr Judith Curry to take the teeth of out Mr Muller's mouth.

If Mr Muller were honest, he would just disagree for his name and his research to be politically abused by notorious liars from the Democratic Party in this shocking way. He's just not honest, so even though he has admitted that the question about the man-made origin of various climate changes remains as open as before and the Berkeley Earth results didn't change anything about it, he agreed to act as a pimp for a politician with a clear and well-defined agenda who wants to "end the climate skepticism".

But aside from these bitter observations, I had some good laugh when I read this sentence on Markey's page:


Three prominent scientists will present the best case yet for the end of climate skepticism in Washington and the world...

That's cute. Rationally thinking people must first wait for a lecture to take place, and then they may decide whether it presented a good case (or even the best case yet) to support a certain opinion. And tennis players usually don't celebrate the victory before the Wimbledon tournament begins. As you can see, Mr Markey – and most of the climate alarmists as well – have the opposite logic. They first know what will happen, and then it may happen. They're following this inverse logic all the time. They first know something, and once the event actually takes place (with a different outcome than they expected), they no longer know about it. ;-)

And Mr Markey is not too modest. His guests will surely present the "best case yet" to end climate skepticism not just in the U.S. Congress but in the world, too. This is just so cute. If Marc Morano and Anthony Watts (and a few others such as myself) hadn't promoted this particular obscure page of Mr Markey, almost no one in the world would even know that the testimony takes place. And he believes it will be the "best case yet" before anyone has watched it. That is a wishful thinking run amok.

Well, how could Mr Markey invite anyone less important than the true heroes who will end the climate skepticism in the world, if not the multiverse, within a talk that takes a few hours? Mr Markey is such a symbol of success, with all of his failed and indefensible attempts to impose the regulation of carbon dioxide in the U.S. There's surely no reason to expect that another event organized by Mr Markey will be another miserable failure, is there? Except for a proof by mathematical induction, of course.

The number of statements that can't possibly have any rational justification but the climate alarmists are ready (and eager) to make them is just extremely high. I can't believe that there are still "undecided people" who haven't been able to figure out that the climate alarmists are being dishonest pretty much in every single thing they do in their lives.
Luboš Motl v 7:57 PM
Share