Go elsewhere to learn everything about 11

Last night, I went to Aussig (Czech: Ústí nad Labem, "River mouth above the Elbe river"), the traditional capital of North Bohemia as well the Sudetenland (in a previous era) in order to chat with about 50 folks attending the Science Café about string theory. It seems to me like a pretty good format for "human" lectures on science. After all, (humanities-type) intellectuals often gather in cafés and natural scientists may want to learn one of the few things they may learn from the humanities types. :-) 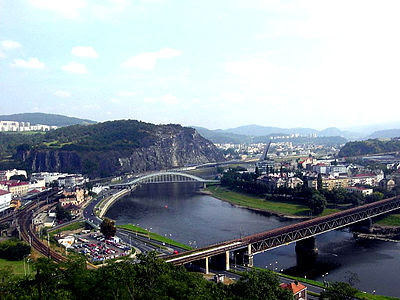 I've been to Ústí, which I never visited before 2008 (except for days I totally forgot later), pretty often recently, mostly because of strings and ice-hockey.

The hosts were very hospitable and generous and the number of people in the audience set a new record for this Aussig event. Many good and important questions were asked – well, I think you may expect what many of these questions (and perhaps answers) were because they're usually repeated during almost every event of this sort. The audience measurably included some string theory "infidels" but make no doubts about it, I don't really care and I still count them as visitors and consider them as a part of the event's success (or my success).

The absolute value around each term shouldn't be forgotten here. ;-)

Too bad I didn't memorize some of the multi-part questions quite perfectly. For example, I forgot to discuss whether the human mind is as limited as dog's brain and whether it has a chance to "understand everything". I believe we don't suffer from such a limitation because we're above a certain threshold that allows us, in principle, to "manage" the construction of arbitrarily tall and structured systems of ideas. Our memory and CPU power is just "quantitatively" better than the puppies' counterparts; however, we're able to think and think about thinking and use paper and computers to "extend" our mental reach which is arguably enough to knock the Heaven's door.


After a 30-minute introduction to string theory, the discussion revolved around the anthropic principle, testability of string theory, chances to complete a theory of everything, the future funding for particle physics, the intelligence of Edward Witten, the OPERA neutrino experiment, chances that it may be explained away by some relativistic corrections (the Gentleman who was pushing the idea that "we don't have a clue about the shape of spacetime around the Earth and I would get an F from [GR instructors] Bičák and Kuchař if I say something else" was somewhat difficult but I was told I wasn't the first speaker who experienced him in this way haha).

I can't – and I don't want to – digitize everything that was said over here. Obviously, not everyone could understand or believe everything I tried to say: that includes the main host and her dog, Gary. Many of the string theory skeptics will surely be less skeptical next month when their Science Café will be about the end of the world in 2012. ;-)

During similar events where you're supposed to represent a broader spectrum of physicists, including confused (and dishonest) physicists, you may be tempted to borrow the other physicists' opinions and present them on par with the things you really believe. Let me admit that I feel this temptation as well but in most cases, I do resist it and clearly articulate the difference between the things that I consider right (or at least conceivable) and those I consider wrong (or impossible). But it is very clear to me that if my inclination for populism and diplomacy were just a little bit stronger, I may be presenting things like loop quantum gravity on equal footing, too. At the end, I don't believe that some of the presenters – maybe including Brian Greene – are really "open-minded" about the other, wrong theories of physics; those folks just attribute a sufficiently higher role to diplomacy and the "social cohesion of the physics community" over the truth supported by the evidence as they understand it.

North Bohemia has almost funnily confirmed many expectations about the life over there. In the media, we are told about the tension between the ethnic Czechs and gypsies in the North. But is it just an oversimplified stereotype? Well, when I was walking through their central square, a bullying type of a 60-year-old strong white Czech was chastising a group of about 10 gypsies on the square: Where do you think that you are? And so on. (I have no idea what they did wrongly but my guess is that they did something wrong: call it another stereotype but it is a result of quite some experience, too.) Despite his muscles, he was pretty bold and I had to laugh when I placed this observation into a broader context.

Video 1: The newest 15-minute "What's new at CERN" video was released 4 days ago. They discuss switching to the lead-lead ions after the 2011 proton-proton run and other things.
Luboš Motl v 11:11 AM
Share