Today, I choose a preprint on hep-ph which the historians of science will consider to be a characteristic sign of the current times in particle phenomenology:


The Cornell-affiliated authors, Csaba Csaki, Yuval Grossman, and Ben Heidenreich, most of whom I know in person (not the last one: but I had a classmate named Heidenreich when I was 7), start with the same evaluation of the LHC results so far as you may have seen on TRF: throughout 2011, low-energy supersymmetry with conserved R-parity has been dying as a solution to the hierarchy problem.

What do those words mean? One may say that the main kind of possible signatures of new physics that the LHC could have seen but hasn't seen were events with "missing energy" i.e. with new invisible particles that just invisibly escape from the detector (and often from Switzerland and from the Solar System as well) and cause an apparent violation of the momentum and energy conservation laws. 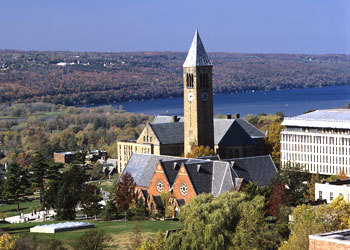 What are those invisible particles that were not seen even as invisible ones? :-) Well, these particles could be neutrinos – but the production of neutrinos is limited and under control – or new neutral particles such as the LSPs, the lightest superpartners, which are stable in theories with conserved R-parity. The lightest neutralino (a superposition of Higgsinos, zino, and photino – superpartners of the neutral Higgs fields, Z-boson field, and the electromagnetic field) was the canonical LSP in these models.

Let's be fast and cruel and simply declare the R-parity-conserving theories to be excluded. We may add lots of a posteriori explanations why we should have always expected the R-parity to be broken and why we were just brainwashed into mindless thinking that R-parity had to be conserved (I surely feel this way today). For example, it has the baryon number in the exponent and there's no reason why the baryon number should be exact: so why its exponential should be? There's no stringy reason why R-parity should be expected to be exactly conserved, either.

When it comes to supersymmetric phenomenology, R-parity-conserving theories out, R-parity-violating theories in. That's the message of the LHC at the end of 2011. This conclusion isn't based on "negative results" from the LHC only; there start to be "positive hints" that R-parity-violation should be right. See, for example, CMS's multilepton deviations.


The exact R-parity has played several roles in supersymmetric model building. The two most important roles are that the invisible stable LSPs – those that should have been "seen" as the invisible particles but they were not – were an excellent dark matter candidate; and R-parity was considered nearly necessary to naturally make protons stable. No proton decay has been seen as of today so the lower limit on its lifetime is something like \(10^{33\pm 1.5}\) years, depending on the assumptions about the decay products.

None of these two arguments "proving" the R-parity conservation law has been robust. Even when R-parity is broken, the gravitinos may be an excellent dark matter candidate. They're unstable but because their interactions are linked to the tiny (from the particles' natural units' viewpoint) Newton's constant, a sufficient fraction of gravitinos may have survived from the Big Bang to the present era and they may dominate the dark matter. For the same reason (small coupling), they're almost never directly produced inside the LHC.

Also, the proton doesn't require the R-parity to be conserved. In reality, it's much more important that either the baryon number or the lepton number is conserved. Because the proton is ultimately decaying to a positron plus some fully neutral particles such as the photon, you may see that both baryon number and lepton number conservation laws have to be violated for the proton to decay. So it's enough if the Lagrangian conserves one of them.

In the previous article about the CMS multilepton anomaly, we looked at models with extra terms that preserved the baryon number but violated the lepton number. There were several such possible terms and the CMS detector offered us a hint – reincarnated into an excess – that their coefficients could be nonzero.

In the new paper, Csaki and colleagues take the other possibility. They assume that their Lagrangian is R-parity-violating but the terms that break the symmetry do preserve the lepton number. Instead, they violate the baryon number. There is exactly one term that may be written down – essentially an \(udd\) term in the superspace that may create (or annihilate) the same quarks that are included in the neutron (well, one or three of them have to be replaced by their superpartners, so I really mean a sneutron because you can't create a single fermion out of nothing): note that the electric conservation law is (and has to be) of course preserved. Csaki et al. have to worry about the proton decay as well as the neutron-antineutron oscillations that haven't been seen and maybe a few other processes (dinucleon decay) that constrain their model but, as they say, the constraints are very weak.

To be more accurate, their baryon-number-violating, neutron-superpartner-destroying term in the Lagrangian also includes three copies of a spurion. That's not a word I used too often in my life so I wanted to see a comprehensible definition. Let me admit, the Wikipedia entry on spurions looked very meaningful and useful to me. Then I clicked at the history of the page – and it was written by your humble correspondent a year ago. :-)

At any rate, the new natural setup they assume is that the R-parity violation is linked to the violation of flavor symmetries (hypothetical symmetries that exchange the 3 generations of quarks and/or leptons) and those can only occur because of the different Yukawa couplings (i.e. different masses of different leptons and quarks; and due to entries in the CKM matrix in general); this principle is what they call the minimal flavor violation or MFV (taken from older papers). So the Yukawa couplings are promoted to auxiliary fields that you treat just like ordinary dynamical fields. The coefficients of the R-parity-violating terms may then be written as products of powers of the Yukawa couplings, roughly speaking, and because the latter are small, the R-parity violation will be sufficiently weak, too.

The authors study where this attitude leads them and they conclude that they may construct natural (free of fine-tuning) supersymmetric models with phenomenology that is very different from the R-parity-conserving phenomenology that many phenomenologists learned years ago but that is also compatible with all the experimental constraints, including the LHC's apparent ban on the missing energy events. I've made similar conclusions more informally. At any rate, you see that many physicists who are "in" think that this is currently the most natural explanation of the hierarchy problem on the market.