Shall we digitize all bureaucracy and money transfers?

The city of Pilsen has been intermittently using its own coins, banknotes, and currencies for centuries. For example, you can buy 1/3 of a liter of beer for this silver coin:

Well, I don't know where you can get such a coin but if you manage to do so, you won't be thirsty in Pilsen. ;-) Because of a promotion event, the so-called Pilsner Card which started about five years ago was produced for free during the last month so your humble correspondent got one, too.


On Wednesday, I picked the Pilsner Card which I ordered 3 weeks ago or so. On Friday (yesterday), I charged it with about $5 from a checking card – a careful, conservative approach to untested things: what you would expect from me. :-) And today, on Saturday, I tried that it works in the public transportation system. It does!

The card (of a normal credit-card side and shape) looks like this:

Of course, the photograph isn't always equally attractive. In many cases, it is less attractive. You may charge it in a "human way" in special shops or by special ATM-like machines (26 copies in Pilsen) which borrow this card as well as your VISA card for a while. The money loaded into it – limited to $200 or so – may be used in buses, trolley buses, streetcars, museums, and several other places. The possibilities are gradually expanding but aside from the public transportation system which is covered, they're still exceptions rather than rules.

With the full Pilsner Card, you may jump into a bus and go to the closest "cardman": 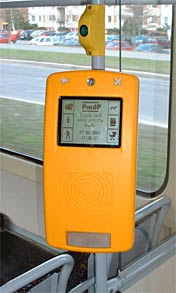 There are two of them in every vehicle. You press something like "30 minute adult ticket" on the touch screen, just add your card, and a fast printer immediately prints a receipt (ticket) for you which only takes a fraction of a second (no communication via the Internet: the money is "stored" on your card). It's surely faster than the attempts to perforate the 4 disk-shaped holes by the not-so-sharp knives in the traditional machines I've been using so far – and I've been buying tickets even though there were only (9 choose 4) = 126 combinations for the used tickets so I could buy all of them, too. ;-)

The card must use some magnetism. I have no clue about the exact location or format by which the card stores the information; and whether the card dies as soon as it encounters a magnet somewhere. And I don't plan to do experiments now. But clever experimenters could probably find a way to recharge their cards for free etc. (a homework you will implicitly be asked to solve is whether such a thing can be made safe by known technologies). :-)

It's also possible to use some cell phones with NFC, Near Field Communication, with these cardmen.

It's clearly convenient. You may also buy prepaid tickets for a month or a year etc. However, I am just reading about horror stories from the trains around Pilsen where the inspectors may use dysfunctional readers and because they can't read your Pilsner Card, they insist you show them the thin paper receipt as well (which may be one year old, wet, and probably unreadable by now). This aspect surely doesn't help to reduce bureaucracy.

One of the advantages – or required features – of such prepaid things is that they only contain a limited amount of money so if you lose them or destroy them, your loss is bounded from above. In my opinion, the unboundedness is what prevents checking and debit cards from becoming really omnipresent. I believe that with a system of rechargeable Pilsner-Card-like objects, the civilization could eventually switch to totally coin-free, banknote-free modes of payments.

Of course, I believe that our civilization also possesses the "rough sketch" of all the technologies that would be needed to replace all other identification cards and objects, forms to be sent to tax and other government offices etc., by some electronic counterparts that would be much more automatic.

Because I had to become a value-added-tax payer because of a silly reason, I was also forced to learn how to fill the quarterly tax forms (where I have to report zero all the time, for other reasons) electronically and send them through a special "data mailbox" (for Czechs: I mean "datová schránka") designed to communicate with the Czech government offices.

I was nervous when I was applying for it but once you verify how it works and that it works, it does seem much more convenient than the physical contact and visits. However, every new type of application seems new and is a source of potential problems so despite the fact that I learned that it works, I still prefer to submit all the other tax forms etc. in the old way even though it's probably possible to do it in the same electronic way, too.

This behavior of your humble correspondent – who is conservative but surely no hater of electronic devices and the Internet – suggests something much more universal. Things must simply work and people must believe that it works, it is convenient, and it is safe.

Such a new system – that could re-energize almost everything we do "bureaucratically" or "financially" – would have to replace the old system almost completely for it to be beneficial. The risk that you will do everything twice – on the paper and on the new system – is substantial and a new technology that is introduced in an unsophisticated way may clearly be harmful, as I've been told in many cases (I was informed by a distant relative of mine who works in the tax office that since the time they got computers to do everything nicely and automatically, she has two write two paper-based reports every time she presses enter).

If a fully electronic, functional system were introduced cleverly, the waiting time to get a "receipt" from one government (or corporate!) office that you satisfy certain conditions so that you may do something else would drop to zero. The babe in the video above would save 3.5 minutes because she was lucky to meet relatively hard-working, co-operative, friendly, and fast bureaucrats in Spain and she knew how to deal with them efficiently. Most of us are less lucky or less skillful so we could save weeks in similar situations.

Someone who introduces such things must have some idea about the real world, about the behavior of the people who are going to be affected by the system. For example, the main health insurance company in the Czech Republic, VZP, started a project called IZIP, some electronic book available via the Internet with all your medical data, history of visits of doctors, details about your blood (when it's needed, available from your insurance card), and so on. A billion of crowns was invested and it was a complete debacle: almost no one uses it.

So such things could be done in many stupid ways and lots of money and time could be wasted. However, I still think that it could also be done "cleverly".

I was thinking about the ways how to modernize all such things in a testing country, e.g. the Czech Republic. Imagine that you're the boss of a company that is supposed to replace the existing system by one that is liberated from the technological anachronisms of the past. You start from scratch. You have enough money to buy a $300 electronic communication device for each citizen of the country. And maybe most of them will already have it. The cards etc. should be very cheap so we don't need to discuss them.

How far would you be able to get? Can you make a calculation showing that the investment would be repaid in XY years? How would you deal with security against hackers and thieves? How would elementary things – such as your baby's purchase of an ice cream – be done?
Luboš Motl v 7:55 PM
Share