Robbert Dijkgraaf will become the director of IAS

The employer of Einstein, Witten, Maldacena, and others at Princeton has a new boss since July 2012


And it is a well-known one. See IAS Princeton press release. He is a great physicist and a very good diplomat, painter, and presenter of science. Also, I won't resist to mention that his (1st-2nd almost tied) most cited paper is one on matrix string theory ;-) and we co-wrote a tiny paper on higher order corrections to the DVV interaction in matrix string theory. 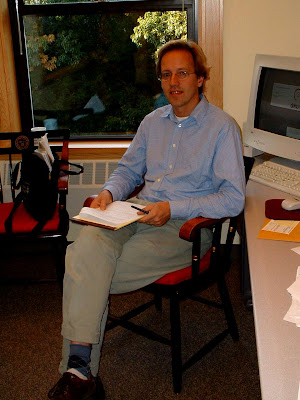 I took this picture (and others) when we were offering Robbert a job at Harvard.

On this blog, you also find comments about Dijkgraaf as a boss of the Royal Academy of the Netherlands and an Inter Academy Council that was evaluating the IPCC panel or something like that. As far as I remember, their work ended with some sensible yet "neither fish nor fowl" recommendations that ultimately didn't solve a damn thing ;-) but at least Dijkgraaf demonstrated he is a good politician. Many of them "solve" things in the same way all the time.

Dijkgraaf's name appears in 25 previous TRF articles which is not bad at all if you accept that this quantity is a very good measure of someone's importance. ;-)

Robbert Dijkgraaf will be not only the director of the physicists but also a director of the other scientists as well as social scientists and other pseudoscientists. He will give up his presidency of the Dutch Royal Academy of Sciences.
Luboš Motl v 7:04 PM
Share