See also: What a 125 GeV Higgs could be telling us


Update: TRF reader Azerty13 (Azerty is how the French keyboard begins) and the rest of the CERN community received the following dramatic e-mail:

I would like to invite you to a seminar in the main auditorium on 13 December at 14:00, at which the ATLAS and CMS experiments will present the status of their searches for the Standard Model Higgs boson. These results will be based on the analysis of considerably more data than those presented at the Summer conferences, sufficient to make significant progress in the search for the Higgs boson, but not enough to make any conclusive statement on the existence or non-existence of the Higgs. The seminar will also be webcast.


The significant progress with inconclusive results may mean some 3-4 sigma bumps seen by a collaboration or both of them. Or it may mean something else. Another rumor that began to circulate today is that a 2-3 sigma hint is seen at a completely new mass, namely 125 GeV. Other sources add that the di-photon channel of both experiments would dominate this peak. Additional rumors even say that ATLAS' peak near 126 GeV has 3.5 standard deviations and CMS' peak near 124 GeV has 2.5 standard deviations. That's 4.3 sigma (i.e. 99.998% confidence level) if you combine them in quadrature and ignore the difference in mass. 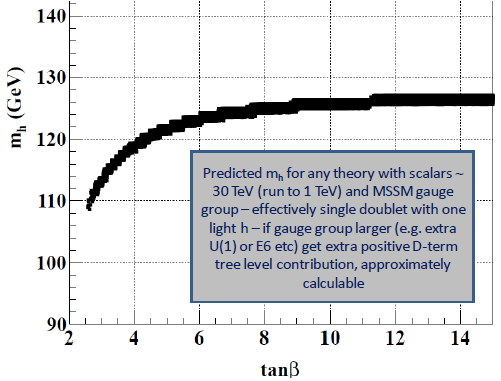 125 GeV is also the threshold above which extensions of MSSM could be favored over MSSM (Minimal Supersymmetric Standard Model). Aside from \(G_2\)-holonomy M-theory models masterminded by Gordon Kane, the value of the mass would also please researchers of \(E_6\)-based grand unified theories (GUT). You may check that the Higgs mass predictions near 125 GeV are almost totally dominated by SUSY models.


Related: see 300 articles on this blog that mention the Higgs


Adam Mann of Wired ordered the information from our insider readers to a slightly more readable and ordered article than mine...


ATLAS, CMS bosses will give Higgs talks in 12 days
The following text was posted yesterday


and the last hour (which is pretty long!) is dedicated to a joint question session.

A reason why the talks could be more interesting than just a tiny update of the inconclusive graphs we know is that the talks are presented by the spokespersons of the major detectors, Fabiola Gianotti (ATLAS) and Guido Tonelli (CMS). Yes, of course that you have to be Italian to lead any major CERN team. Galileo and Fermi were Italian, too. And so is Pierluigi Campana, the spokesman of LHCb. ;-)

Via The Guardian (and Ian Sample)

Shimon Peres is talking to Fabiola Gianotti, the ATLAS experiment's head, and is observed by CERN director general Rolf Heuer. Amusingly enough, the official caption by Haaretz (or CERN) says: "Shimon Peres talking with CERN Director general Rolf Heuer at the particle accelerator in Geneva Tuesday." Can you spot the difference? :-) Well, yes, I would agree that in this case, she was discriminated against (by the left-wing sexist pigs). By the way, I think that the reason why Gianotti was omitted is that she has no male suit. Despite their obsession with clothes, women haven't managed to invent a counterpart of the male suit that would make them look uniformly serious. Shouldn't Gianotti just borrow a suit from a man? Guido Tonelli's CMS was seeing a bump near 119 GeV that was closer to indicating a "Yes" answer to the big God particle question, something that wasn't quite agreed upon by Gianotti and her friends.

Song "Collider": while the band is called the LHC (Les Horribles Cernettes), the collider on the picture is actually the LEP, the LHC's predecessor in the same tunnel.
Luboš Motl v 4:27 PM
Share