I just returned from a lecture and it was much more amazing than I expected. 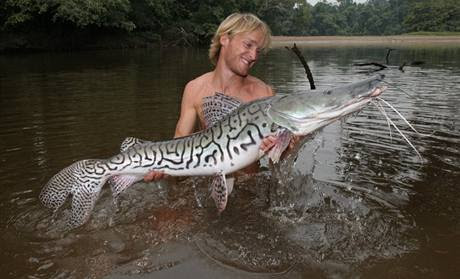 My bank has organized a public lecture for clients who are not just generic thousandaires but they don't have to be billionaires, either. Just something in between, in CZK. ;-) I knew that the speaker would be a 30-year-old (on Saturday, i.e. on Christmas Eve) fisher called Mr Jakub Vágner (WWW) who is also a photographer and voyager.

Based on some previous experience, my expectation was that he would be a relative of a friend of an employee of the bank, so he would just try to impress some random Pilsner folks by a couple of pictures he took on his vacations and some people in the bank could report that they have organized a fun event for the customers. My expectation couldn't have been more wrong!


Instead, what we got was an extreme adventurer I haven't met for years if ever. And it's plausible that he beats Indiana Jones and Bruce Willis combined. He turned out to be a good speaker. More importantly, his stories were stunning. This angler seems to know all freshwater fish in the world that are worth knowing, and he has caught a substantial portion of the species, including many individuals above 100 kilograms of weight and 3 meters of size. But the circumstances under which he did so were potentially lethal. My estimate is that he has survived the equivalent of 8.5 deaths.

He's been to all exotic corners of the Earth where wild nature may be found – Congo, Ethiopia, Mongolia, Himalayas, Texas, among others. But the bulk of his stories focused on the Amazon forest where the concentration of life and threats is immense. Everything wants to kill you and eat you and some things want to eat you without killing you in the first place. He showed pictures with amazing animals from all the places. Texas was mentioned as a place where the cowboys are treating Nature as bandites; in Congo, he had to pay $50 in bribes to get the visas; elsewhere in Africa, he saw the soil-wooden villas of the wealthiest inhabitants which place them somewhere in between thousandaires and unitaires. We're relatively very rich, indeed.

When he wants to visit places such as the Amazon forest, of course he's not satisfied with the peripheral corners of the forests where average tourists dreaming about the Amazon adventures may be shown a few trees and animals by their travel agency. Instead, he has visited places where you can only get by weeks of walking from the nearest minimalistic "airport". His journeys always start at the Prague International Airport. But as he's switching from one aircraft to another, they get increasingly shaky. The same thing holds for the pilots; the last pilot wouldn't be able to get a driving license in Europe.

He doesn't take almost any "stuff for survival" with him because if there were problems, like a successful attack by a snake, he wouldn't be able to save himself, anyway. The fish we were shown were extraordinary, beautiful, exotic. But the diversity of threats that were waiting for you in the Amazon forest was just shocking.

For example, malaria is often deadly. This guy claims to have had malaria 7 times in his life. You can take some drugs when you have it but they weaken your body so you shouldn't take them for more than 25 days or so. He was taking them for 70 days once. Then he stopped. Moreover, there are many worms and parasites that are getting into your body. His favorite doctor at the Prague's Bulovka hospital already knows him and he is always eagerly waiting for the new parasites that Mr Vágner brought from the exotic places.

You can't take any food with you, just a kayak. So you must learn where you may get good enough water to drink – by cutting the right types of lianes at the right place. One must kill various animals (including monkeys, which is the choice of the native tribes) to have something to eat. He said that you shouldn't jump on fish and anacondas. But he also told us that this is what he has done, too. Add several stories about horrifying pranks in these extreme conditions. When he imitated sounds of a male animal, a 5-meter-large horny female came closer to their boat, ready to copulate. Mr Vágner's friend didn't move for 15 minutes. Then he was told it was a prank. No surprise they didn't talk to each other for days.

Catching a catfish larger than the fisherman.

You must avoid peeing into water because there are special fish who feel the warm pleasant stream of water and get into your penis. Once the fish gets inside the tube, it may get erect, to prove that it has the same human rights as you do. The only way to get it out of your body is called amputation. I apologize to female TRF readers for this seemingly irrelevant warning; but Mr Vágner told us that women are not exempt from the threat, either. ;-)

The speaker believes that the largest anacondas may be over 15 meters in size: the Indians clearly told him (by the language of legs and hands) that this was the case. So all scientists who claim that anacondas can't surpass 12-13 meters must be wrong.

He also learned to hate butterflies. Butterflies are cute in Europe or the U.S. You must follow one for hours if you want to see it again and you will probably fail, anyway. In the Amazon forest, a butterfly lands on your skin and you think it's cute. After you tell it good-bye, the butterfly returns with 1 friend, then 2 friends, then 50 friends. You spend a whole day with butterflies landing on you all the time. They probably eat the salt out of you.

A special discussion was dedicated to the native tribes. The Indians have learned how to live there; lots of rules what they can eat and what they cannot eat. This wisdom is being transferred from a generation to another generation. Mr Vágner is a kind of an Indian, either. Well, he can't talk their dialect (and there are hundreds of them in the Amazon forest) but I think he is thinking in a similar way. His survival skills have clearly become unbelievable. The Indians are already "complete people" when they're 10 years old. Death is a regular event; but this still makes them admire life. Mr Vágner believes that the blue savages in Cameron's Avatar did faithfully reproduce the ways how the native tribes think about Nature and their role in it.

At some point at the beginning, he said some things about the people's destruction of the Amazon forest – so far, so accurate – but he also ended this portion of the talk with some insane alarmist propositions such as the claim that the Amazon forest's disappearance is unstoppable and when it's gone, all other forests in the world will be gone, too. This is of course complete bullshit – and something he is really not qualified to sensibly talk about. Even if the Amazon forest were disappearing, the secondary forests are growing and their growth may actually be negatively correlated with the dynamics of the Amazon forest, not positively. At any rate, I told myself: I am not here to get upset, and this was a wise reaction. The alarmist bullshitting largely stopped within five minutes.

He said some numbers about the electric eels. They can produce a few Amperes at more than 500 Volts, indeed. That's enough to kill you. This just sounds incredible. How does it work? It really looks like the cells of these eels work like batteries. Tell me if you know something crisper about this fascinating piece of biophysics.

In his first story, he wanted to introduce himself a little bit. About five years ago, the BBC reported that they were able to discover a totally new native tribe in the Amazon forest, one that hadn't previously interacted with the civilization. The Englishmen were disappointed just a few weeks later when they found out that the tribe had already been living with two Czechs for quite some time.

In the question-and-answers period, I wanted to find out how he was accepted by the native Americans. But an old Gentlemen asked the same question – I didn't learn too much from that answer. So I asked my other question which was entertaining for the audience but its purpose was serious. I really wanted to know whether he had a life insurance. He admitted that as recently as a week ago, no one was ready to insure him. However, some sympathetic souls in the ČSOB insurance company changed their mind and insured him! This was an unexpected advertisement for the ČSOB bank group that organized the talk. The other guests had to believe that I was hired to ask this question but I wasn't. ;-)

Another man asked whether Vágner was also paying money to his retirement funds. He answered that he doesn't have plans for that. ;-) Well, when I was 30, I really didn't know what it was, either. But he is probably really ready to die well before his 60th birthday. Well, sometimes such people manage to live for 100 years.

In a private conversation, I asked him whether the primitive tribes react in an unusual way when they see the white men, their camcorders, and so on. He confirmed that they have to think like if they met an extraterrestrial civilization. When they saw some pictures, they were laughing for a long time, unable to understand how the humans could have been squeezed through such a thin camera, and so on. But it was clear that this aspect of the interaction isn't really what Mr Vágner would be too interested in – and maybe there's not too much you can get out of it, anyway.

Vágner became the first Czech fisherman on Jay Leno's show. I just learned that he's the son of Karel Vágner, a well-known musician. See e.g. Hey, Master of Basses with Ms Hana Zagorová to see who is Jakub's father. Oh, I see, the board game "Fishing with Jakub" I got from the bank a year ago is also linked to him! :-)

There are many things I haven't said. But it would be foolish to try to reproduce those (almost) 2 hours: there was just way too much in it and I don't have the pictures. This guy often works with National Geographic, much like his 63-year-old Czech buddy cameraman George Wednesday (Jiří Středa). Almost all of the other people and "friends" we were shown were indigenous savages. Mr Wednesday has gone through some adventures as well and he's clearly crazy (we've also seen a picture of Mr Wednesday who has been red-decorated by hundreds of mosquitoes, probably also with malaria) but the talk made it pretty clear that he's still completely sane in comparison with Mr Vágner.