Fontgate: The boss of ATLAS shouldn't be attacked for her Comic Sans MS 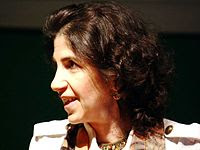 When we watched the public talks at CERN yesterday, I opened a TRF Higgs chat box where up to 40 people were chatting on their fresh excitement, feelings, and concerns related to the Higgs search at the LHC collider.

When Fabiola Gianotti, the female spokesman [sic] of ATLAS began to speak, someone – and I guess it was B Yen, the chimpanzee – started to scream:


Or something like that. I wasn't sure what it meant and whether it was serious. Many other people present in the chatroom were equally puzzled. But it was completely serious and Fabiola Gianotti became an unlikely heretic and martyr. Indeed, you may check the PDF file and see that starting from the title on the title page, she is using Comic Sans pretty much everywhere. If you didn't actively know the font, this is how Comic Sans looks like.

But how is it possible that it makes some people go ballistic?


That is a good question. You may easily imagine that even some of the world's most serious and most conservative websites may sometimes switch to Comic Sans MS. If you need to know how, the HTML command is


But today, encouraged by the article Fontgate by Lily Asquith on Jon Butterworth blog hosted by the Grauniad [sic] which informs us that about a half of the CERN auditorium was actually screaming "Gianotti is the Little Comic Sans Satan, burn her at stake!", I finally looked what is the striking politics behind Comic Sans. The font was released in 1994 as a sans-serif font meant to imitate old comic books. So far, so good. Well, let me tell you the punch line: the font was introduced by Microsoft, that has to be the reason!

These people think that Comic Sans MS liquidates centuries of typography and is a threat for the culture of our civilization, for life on Earth, and for the stability of our vacuum. The most recent efforts on their blog aim to declare war against France because some French designers dared to include Comic Sans fonts to some redesigned logos. Tell me whatever you like but I do believe that most people in the "Ban Comic Sans" movement are just recycled Microsoft haters.

But maybe I am wrong. Some of the critics of Comic Sans who claim that Ms Gianotti has desecrated ATLAS, LHC, CERN, and the scientific community might be closet medieval Germans who would like to reintroduce \({\mathfrak {the\,\,Gothic\,\, Schwabacher\,\, fonts}}\).

And maybe some of those people are fans of the coalition of integers, real, and complex numbers who want to introduce a \(\mathbb{COMPLETELY\,\,DIFFERENT\,\,FONT}\). And because I don't want to jump the shark, I want to avoid \(\mathcal{handwritten\,\,script\,\,fonts\,\, from\,\, \LaTeX}\) and other fonts.


Press CTRL/+ or CTRL/– to zoom in/out, so that you may enjoy the Comic Sans font in the full resolution. CTRL/0 returns the normal default font size.


As you can see, I am somewhat courageous but not too courageous so I will switch back to the font I started with. But before I end, let me still scream: freedom for Fabiola Gianotti's Comic Sans expression! Freedom for Bill Gates to spread Comic Sans MS, even outside Comic Con.

BTW some Czech people now say that Bill Gates has cancer, too: it just takes a longer time to boot.

From America's finest news source: Scientists found the reason why Comic Sans is so funny.

I just previewed this blog entry and Comic Sans MS is just beautiful! I am slightly inclined to switch this whole blog to Comic Sans MS as the default font – for the few weeks before I will realize that the Gothic fonts are the way to go. But maybe I am still too progressive for that. ;-)

Let me be very serious now: I really do think that people who get unavoidably distracted by trivial things such a font in a presentation when they judge the value of scientific research are just superficial, hormonally driven, intellectually inferior animals.

This focus on the form rather than the content is exactly what the "mainstream media" love to promote these days in their efforts to firmly establish idiocracy on Earth. Moreover, most of the criticism is driven by dogmas because Comic Sans is a pretty good font – something creative and casual enough that simply had to become a part of the standardized collections of fonts in modern operating systems. People who criticize it are just members of a mindless mob.

The Register ran a story on the Higgs search yesterday. It contained the screenshot of the final transparency of Gianotti's talk, with this caption:


The concluding slide from Gianotta's presentation. Note use of Comic Sans.


It's apparently politically incorrect to use Comic Sans MS fonts but it is completely politically correct to misspell the name of the ATLAS' spokesperson. At least, they misspelled the name consistently: "Gianotta" appears 5 times in the article! But it wouldn't help "the cause" if I pointed out that Comic Sans haters are illiterate simpletons, would it?

I have finally discovered why so many people scream COMIC SAAAAAAAANNS when they see the font. They are playing the game explained by this picture: