Update after the talks

The talks – get PDF or PowerPoint from both of them – showed that the rumors were almost entirely accurate. The most striking excess was one by ATLAS in the di-photon channel: 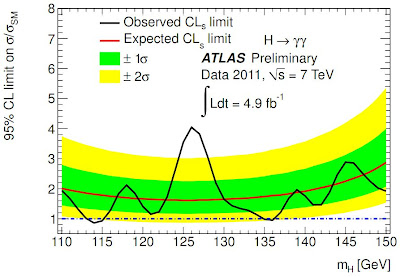 IQ test: can you see a spike in the picture?

In the gamma-gamma channel only, the local ATLAS excess near 126 GeV is 2.8 sigma.


In ATLAS combination with 2.1 sigma (locally) from ZZ and 1.4 sigma (locally) from WW, the combined excess near 126 GeV is 3.6 sigma locally and 2.3 sigma globally (with the look-elsewhere effect correction): see fresh ATLAS γγ paper and lots of other today's new LHC papers.

Moreover, the ZZ channel at ATLAS seems to agree with the 125 GeV (less than that, actually) value, too. Three ZZ-four-lepton events from the 120-125 GeV windows made it; and no other events like that exist between 100 and 145 GeV. Quite a coincidence. 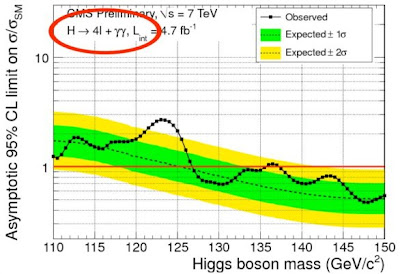 This is CMS' counterpart of the first image in this blog entry (which comes from ATLAS). Well except that both 2-photon and 4-lepton channels are included here. IQ test: what's the likelihood that two totally independent sets of collisions will see a similar excess – the probability of each is below 1% at a given point – at a nearly the same place?

CMS saw a weaker excess which is spread between 119 and 124 GeV or so: see CMS diphoton paper. It's slightly above 2 sigma locally and slightly below 2 sigma globally. 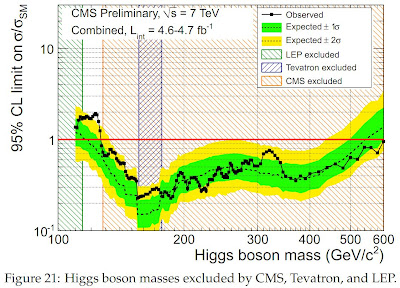 CMS combination from all channels from this paper. 123.5 GeV is where the peak is maximized but their odds for a SM Higgs decrease very quickly for masses higher than 126 GeV.

I would still say that in combination, the evidence for a 125-GeV-like Higgs boson by CMS and ATLAS exceeds 4 sigma. I was spending the time during the talks in the chat box below. See Phil Gibbs and Aidan Randle-Conde for accumulated live blogs.

I can't resist to include this following picture by Phil Gibbs: 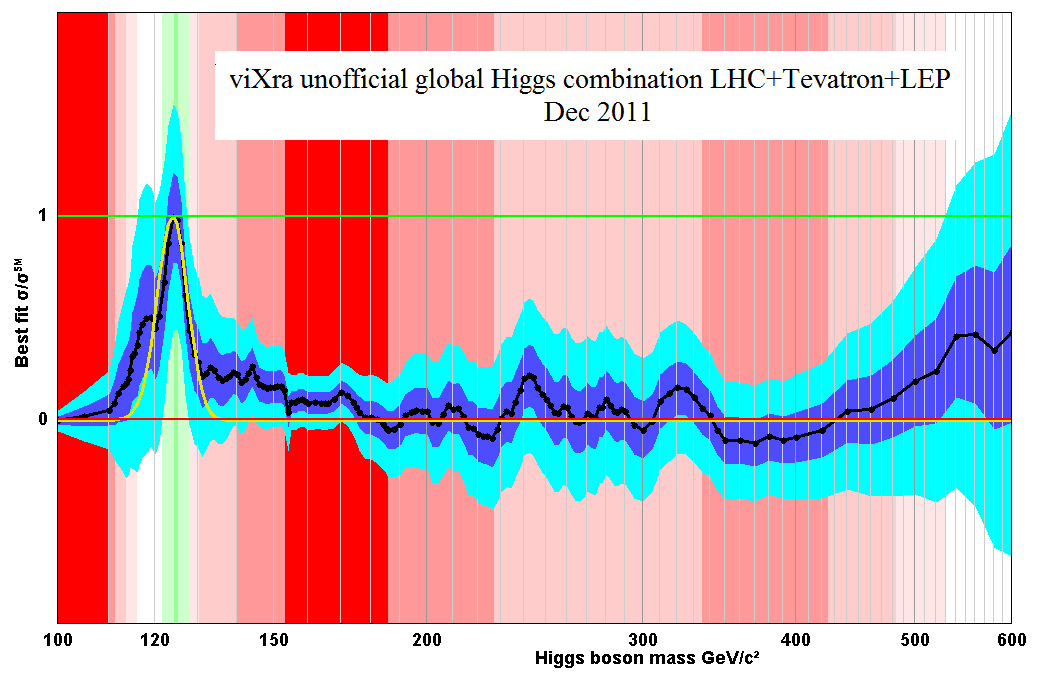 It shows his combination of the LHC detectors as well as Tevatron and LEP (the latter two colliders have been closed but they are useful to refine the lowest-energy corner of the graph). The green "1" horizontal line means "there is probably a Higgs of the mass given on the x-axis" while the red "0" horizontal line means "No". The black line is obtained from the combined measurement. The isolated "Yes" peak near 125 GeV is remarkably sharp. It will almost certainly be getting sharper in 2012.

Original title:
Higgs: 17 hours ahead of the world (published 17 hours before the talk)

Higgs chat box is included in this blog entry.
The freshest news and answers to your question will appear almost instantly.

Attentive physicists and physics fans have already seen a video that CERN will show tomorrow, as well as a couple of events.

People will be shown this 36-second educational video about the Higgs boson:

© 2011 CERN: home pages with and without subtitles

© 2011 CERN: click the picture for additional di-photon, 4-electron, and 4-muon pictures. This is a four-lepton event. See descriptions.

Twitter is already seeing a Higgs hockey stick graph but the 5-sigma bump in Twitter isn't enough to claim a discovery. ;-)

Higgs chat box
Share your newest information and impressions: at the peak of the talks, 40 people were chatting in this ad hoc window

The webcast is already on air!