As soon as our planet was born together with the Solar System about 4.7 gigayears before Jesus Christ ;-), it entered the so-called Hadean eon. About 3.85 billion years ago, Hadean was superseded by Archean. 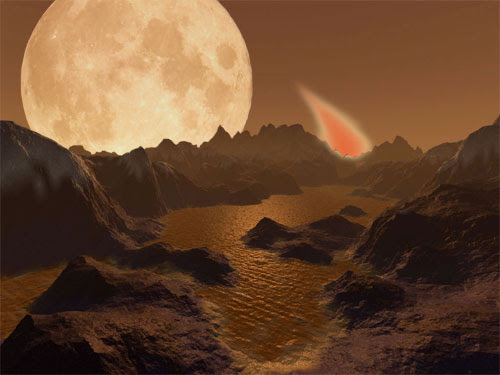 This is a rare photograph because during the Hadean eon, they didn't possess too many digital cameras. The Moon (if it is the Moon) seems large: our satellite was about 30% closer than it is today.

The name is derived from the Greek word "Hades" which means something like "underworld" or "socialism". Tom Vonk may tell us whether "Hades" is etymologically related to "had" which is a snake in Czech. ;-)

This terminology is meant to indicate that the world probably resembled the Hell. Well, this has always been a somewhat loaded term because you would imagine that the climate was hot. However, the young Sun actually boasted just 70% of the current output (according to the current solar models) so it should have been very cool over here. However, the data indicate that we had liquid water from the beginning. This mismatch in the most naive estimate of the temperature is known as the faint young Sun paradox.

The chemical composition of the atmosphere is yet another unknown. It could have been much less hellish than expected, too.


At least, this is the main claim of the following new paper in Nature,

written by Dustin Trail, E. Bruce Watson, and Nicholas D. Tailby. They made some redox-sensitive calibration of the oldest minerals and determined that the oxidation state of the magmas on Earth was close to ours.

Just to be on the same frequency: "redox" stands for "reduction and oxidation". Oxidation is an atom's loss of electrons (it plays the role of a less negative or more positive ion in the molecules than what it did before); reduction is the gain of electrons. For example, carbon \(C\) is neutral and it oxidizes to become \(C^{++}\) or \(C^{++++}\) in \(CO\) and \(CO_2\), respectively. Oxygen is consistently capable of coming in the \(O^{--}\) form so it is the primary element that is able to oxidize others (and the universal process is therefore named after oxygen).

Well, they looked at some chemical properties of the magmas and decided that there had to be much more oxygen in the atmosphere than previously thought. I am not able to verify their claims.

Of course that I believe that only some very hardcore technical research may resolve such fascinating qualitative questions such as the question whether the newborn Earth was very different from the modern one or pretty similar to the present blue planet as we know it. On the other hand, it's fascinating to think about the question whether we could nevertheless try to find some legitimate "philosophical" or "quasi-religious" arguments why the answer should go in one way or the other, e.g. some anthropic arguments. (We surely do know that the Universe as a whole was cooling and changing in pretty monotonic ways from the beginning.) A simple example of such an assertion I can make is that it is surely easier for life to evolve and adapt if the atmosphere isn't changing "qualitatively".

At any rate, if the authors are right, the Earth will look even more "self-regulating" in the long run than what we were believing yesterday.