U.S.: one month to buy lots of light bulbs


Papertiger informed me that in one month, a new regulation banning the sale of most of the incandescent light bulbs will start to be enforced.

The law says that what's really being banned are "inefficient" light bulbs and because it's written in an as-impenetrable-as-possible way, I can't tell you whether your favorite light bulb will remain available after January 1st, 2012 (and it is not even widely known what percentage of existing models will be banned). Even if I were able to extract this detailed information from the U.S. law, I don't know which price you're ready pay and what other features you expect. One thing is clear: "inefficient" surely doesn't mean "bad" according to your rational judgement because the bulbs' consumption is tiny, anyway. Your desktop PC running at 120 Watt for half of the time (half of each day) is almost certainly a much bigger issue.

So I recommend you to use December 2011 for buying a dozen or few dozens of cheap classical light bulbs of the kind you would normally do – the number of such light bulbs comparable to what you buy in 5-10 years. The amazon.com link with a pack of 24 light bulbs for $12 may be a good example. Such a $12 investment may rather soon turn out to be a good one.

Unless you have plans to offer the devices to all of your friends and many other people, you shouldn't buy an infinite storage of the light bulbs because in 5-10 years, the newer technologies will either get economical (and non-toxic) or the ban will be lifted because the U.S. is a democracy, after all.


For a long time, Thomas Alva Edison's technology had a monopoly. 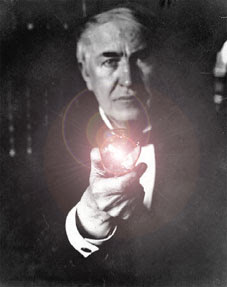 These days, we do have alternatives but they are not ready to fully replace Edison's light bulbs, mostly because of their high price. LED light bulbs are non-toxic, efficient, and pretty warm in color but they're really expensive. However, don't get totally misled: sometimes you may buy a LED light bulb which normally costs $35 for as little as $15, like the 7-Watt bulb on the left which should be equivalent to a 60-Watt incandescent one. (In the Czech Republic, it seems we can't really get below $25 for similar models.)

Even after the discount, this LED light bulb is still 30 times more expensive than the classical one advertised at the top but there already exist situations in which you may enjoy the LED light bulb and in which it could even be more economical. And wealthy enough U.S. readers who don't have any LED bulbs are surely recommended to buy at least 10 of them from amazon.com. (If the number of purchases through my amazon.com link will be high enough, I will let you know about it.) However, be sure that in a majority of situations, it's not the case that the LED bulbs are more economical. At numerous places at home where the light is on for a few minutes a day, it makes absolutely no sense to buy anything else than a classical incandescent light bulb. Just do the maths. You pay less than one penny a day for the electricity and you need decades to spend the money you would spend immediately if you bought a LED bulb.

Of course, I assumed that the reader understands that mercury from the fluorescent light bulbs – and other potentially problematic elements and compounds – are much more harmful than carbon dioxide which is not harmful at all – it's really beneficial (but the effect is negligible, anyway). If a reader thinks that he or she helps the environment by removing Edison's light bulbs, I won't be able to give him or her a useful recommendation when it comes to the lightning. Instead, I could try to recommend him or her a good psychiatrist.

In the Czech Republic, the EU ban on some classical light bulbs has mostly been a non-event. I think that one hasn't seen a visible change in the composition of various types of the light bulbs at home. (As far as I know, light bulbs up to 99 Watts are still totally legal, anyway.) We have non-classical light bulbs at various places and we would have them without the ban, too. Still, the number of people who are angry about the ban is growing. Everyone knows that this harassment has changed nothing in the positive direction, to say the least.
Luboš Motl v 11:00 AM
Share