The French lawmakers passed a bill that makes it illegal to deny the Armenian Genocide. Nicolas Sarkozy's signature was considered to be a formality; a week ago, most French senators in a committee voted against the bill because it violates the freedom of speech. They were overruled on Monday. If the bill ever comes to force, genocide deniers may pay $60,000 or so and/or spend a year in jail.

Turkey is suspending most of its ties to France and threatening further "sanctions".


The Armenian Genocide is the second most widely known and studied example of a genocide after the Nazi-organized Holocaust against the Jews.

Ralphael Lemkin coined the term "genocide" in 1944: it was a word that was badly needed and filled a gap in the people's vocabulary. The word is built out of "genus" which is Greek for race/kind/birth (or the number of handles on a Riemann surface) and "-cidius" which means killing or cutting in Latin. While it's always a matter of precise definitions what we consider to be genocide and what we don't, one should still maintain some consistency in his definitions.

I personally reserve the word "Holocaust" for the events in the Second World War that influenced the Jews. However, it is silly to think that such things may only occur to the Jews. If some Jewish readers think that this is the case then apologies: but you don't have this "monopoly".

It seems obvious that the events taking place in the Ottoman Empire in 1915-1923 should be classified as genocide. The Wikipedia article brings us lots of details what was taking place. About 0.6-1.5 million Armenians (Christians) were killed. Many of them died during "deportations" and this "coincidence" was really a part of the Turkish design. The people were forced to walk for hundreds of miles without food or water, and so on.

But you may see some examples of more concentrated massacres in the Wikipedia article. Whole villages of women and children were burned on a pile; one could smell human flesh for days and the Turks who witnessed it were psychologically hurt for years. Most of the people on many boats were drowned. Schoolkids were gathered in the mezzanine of the school and treated with toxic gases, in a predecessor of gas chambers. Morphine overdose and deliberate typhoid inoculation were reported, too. I don't want to continue because it's scary. 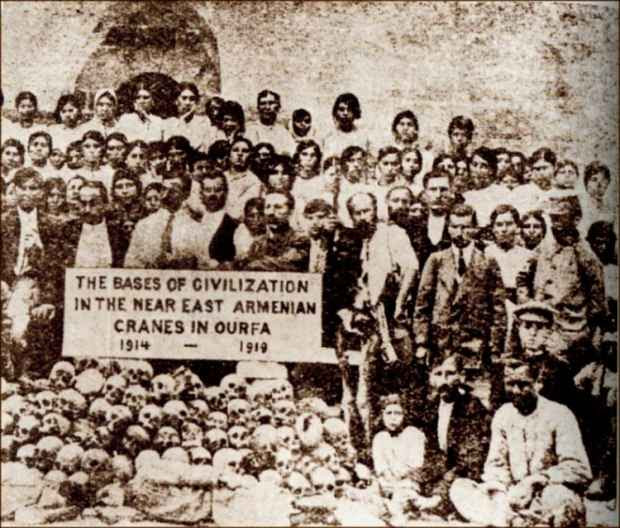 The official opinion in Turkey is that those people just happened to die and they were victims of the war. Sorry but a Holocaust denier may say the same thing about the victims of the Holocaust, too. In both cases, most of the victims were just not fighting so you can't consider them legitimate victims of a war. It is irrelevant whether they belonged to an ethnic group whose majority sided with the (Tsar) Russians against the Turks (in the war). That's also why Turkey's allies and neutral countries denounced the policies, too. A war is a somewhat routine event which doesn't give governments the moral right to do anything. One may argue about the terminology but what we shouldn't argue about is that the Turkish state and establishment did things that were intolerable and that should never be repeated.

A similar genocide has been directed against other Christian ethnic groups in the Islamic Ottoman empire. The purpose of these events and their official blessing seems totally obvious. In those cases, the victims had been second-class citizens for centuries. Before the worst massacres, the Ottoman Empire did lots of milder crimes against the Christian population. For example, it forced the Christians to pay taxes (many modern countries are still committing this crime).

Centuries ago, my ancestors were helping our relatively cultivated empire – Austria-Hungary – to stop the expansion of the Turkish Islamic anticivilization into the European continent. At the end, they were pretty successful. Thank God.

Europe as well as the Christian churches have made lots of progress. Christianity is the primary religion that became compatible with the modern world. A problem is that this isn't true for the Islamic anticivilization. It's as full of bigotry, hatred, forced submission, and dreams about a complete control over the world as it was 1300 years ago.

Apologies, bigots, but this is just not an acceptable attitude in the 21st century. You must either learn to accept that in the global scheme of things, Allah is just another (un-American) idol, just like Lady Gaga or Barry Kripke or anyone else, or you must be considered a security threat for peace and freedom in the world and you must be fought against.

There are people who believe that Europe should become a country. And many people also believe that Turkey should be a member of the EU. The two sets are far from being disjoint. But just imagine how crazy such a co-existence would be if the union tried to penetrate into the judicial issues. In France, one has to pay $60,000 and spend a year in jail if he denies the Armenian Genocide.

A Frenchman would expect that "somewhat similar" laws and moral standards apply in the whole Europe if Europe really resembles a country. On the other hand, if Turkey were a member state, pretty much all the population would deserve to be jailed for a year and to pay $60,000 per capita. It means that Turkey already owes about $4 trillion to France but I guess that France will have to spend exactly this amount of money for the extended prisons. ;-)

Some people, including Czech president Klaus, support the further territorial expansion of the EU because such a process may slow down the deepening of the integration process. He surely has a point but I find this attitude risky. We could easily see how the EU elites get smoothly reconciled with the Islamic bigots and genocide deniers in Turkey. Individual freedoms would not be winners if the two strange bedfellows ultimately slept in the same bed. And indeed, much of the EU hierarchy has features that resemble the characteristics of the "leaders" in Islamic totalitarian regimes.

Also, I think that the new controversy about the Armenian Genocide will reinforce the opinions that there are no moderate Muslims. It's my belief that almost everyone who proudly considers himself to be a Muslim is going to deny the Armenian Genocide. Anecdotal evidence supports my assumption. The logic behind this thinking is that these people are unwilling to admit that something may be totally and systematically wrong about the way how the human society is directed under the supervision of Islam. They're not willing (or they're not allowed) to admit that Allah has really been imperfect, or a nasty primitive killer. It's politically incorrect to say such things in the Islamic world even if they're demonstrably true.

This situation is much worse in Islam than it has ever been in Christianity because Christianity has always primarily been about the individuals' relationship to God and its attempts to influence every aspect of life have been nonzero but self-restrained. Islam knows of no such limits. It's a fascist system that aims to dictate everything to the people.

One may discuss whether or not the French law violates the freedom of speech. Well, it does. But it is designed to protect an even more vital freedom, the freedom to live. The idea is that the denial of genocide is the last stage of the genocide – guaranteeing a faked status of "innocence" to the perpetrators – and that's why it's also a step in the planning of future genocides. I agree with this logic that's been promoted by the U.N. at least since the late 1940s. Freedom of speech is a holy principle as long as it is about the speech only. I think that the suppression of evidence showing organized killings of an ethnic or religious group isn't just about the speech; it contains the component of an actual collaboration in such despicable acts. You may say whatever you want as long as you are actually not helping contemporary or future killers or would-be killers in committing crimes. I happen to think it's impossible to deny past crimes without this "side effect".

Finally, the denial of two genocides would be outlawed in France: the Holocaust is already "undeniable". Compare Turkey and Germany in these rather analogous situations. Can you imagine that Germany would break its diplomatic ties with France because the Holocaust can't be denied in France? Well, it can't be denied in Germany, either. The evidence is comparable in both situations but the institutional life of present "mainstream" Turkey still depends on lies about important historical events.
Luboš Motl v 9:37 AM
Share