Before the Christmas, I discussed the EU plan to introduce a climate protection racket on all airlines whose flights end on the EU territory. (You may decide whether the three-word term is derived from "climate protection" or from "protection racket".) The companies should pay money for every pound of CO2, including the CO2 emitted away from the European airspace. 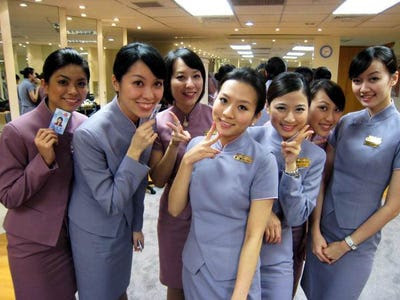 We knew that it should have come into force since the beginning of 2012. The civilized world, the third world, as well as China and India protested against the EU intents as examples of organized crime that contradicts the international law.

Now it's 2012. What happened with this explosive global warming proposal?


Well, in the case of China, it's simple. The China Air Transport Association has assured the European bureaucrats that there's no way they will pay the climate protection racket. The Chinese comrades want the Europeans to negotiate.

So Chinese airlines won't pay the fee that the carbon criminals in the Brussels would love to call a "law". It remains to be seen whether others will pay it; Lufthansa and Delta Air Lines Inc. are already planning to comply and hike the prices. If these two companies and others will pay it, they may gradually run "out of business" while their Chinese counterparts may stay "in the pidgin". :-)

The Chinese comparative advantage may become sufficient for the Chinese airlines to supersede the airlines from all the weak countries that don't have the courage to tell them "Screw you, Eurotrash". So far, we're not there: Delta only added $6 per average round-trip flight (one percent of the price) which won't make a difference. But it won't make a difference with emissions, either. If the EU found Delta et al. to be obedient enough, they may raise the levy substantially so that it does make a difference.

I am no big fan of the rumors about the immensely growing Chinese economy. But if the relative strengthening of the Chinese airlines is what this misguided EU idea will lead to, then I will consider it a well-deserved outcome.

While I find it appropriate that the would-be "law" is going to be ignored, and it was inevitable that it would be ignored – and the European Union has no acceptable tools to enforce it – I am worried about the rule of law in the EU in a broader context. It's just very bad to have "laws" that are not being respected: the infection may easily spread to other sectors and an ordered Old Continent may gradually turn into anarchy.

To avoid this scenario, responsible judges should abolish the insane policy and declare that it had never been valid. In the future, the EU policymakers and lawmakers should avoid declarations of "laws" they have no power to enforce, such as laws that the weather isn't allow to change by 2 °C and similar pseudoscientific stuff that became so widespread in recent years.
Luboš Motl v 3:24 PM
Share