Or is it a shadron or NLSP?

Eva Halkiadakis of my graduate Alma Mater, Rutgers, has presented the newest results of the CMS searches for physics beyond the Standard Model:

Yes, the number of female experimental particle physicists with ancestors from a particular country (she is otherwise American!) is proportional to the country's present public debt expressed in the U.S. dollars.

In the PDF file, you find new graphs – sometimes using as much as 5/fb of data – relevant for the availability of any monster you may think about, from leptoquarks to extra dimensions, black holes, and of course lots of supersymmetric particles, among tons of other stuff.

Shadron, a particle from the World of Warcraft

Phil Gibbs has checked all the graphs and saw almost nothing surprising, no hints of new physics. However, one graph seems to be a provoking exception.


Look at the beautiful black island in the green sea. 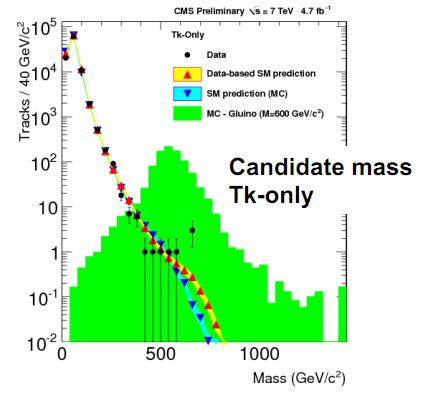 If you check its height, i.e. the reading on the y-axis, you will see that 3 events were seen in the bin between 660 and 700 GeV, or whatever the exact boundaries of the 40-GeV-wide bin are. Three is a lot, especially if you compare it with 0 events in all the surrounding and all the high-energy bins.

In the Poisson distribution, we may kind of neglect the decreasing exponential because the exponent is rather small. So the probability to get 3 events is between 0.07 cubed over 3! and 0.3 cubed over 3! which is between 60 parts per million and 0.5% or so.

Depending on the theoretical basis you choose, the bump's equivalent local significance level is between almost 3 sigma and almost 5 sigma. Of course, the look-elsewhere correction could reduce the optimism significantly because there are many bins in this graph and, even more importantly, very many bins in the whole CMS paper.

You shouldn't get carried away. This may look like one of the random bumps that have gone away, even recently, like some of the ATLAS dijets at 3.33 TeV and so on (also three similar events: but it was a fluke). However, if you like to think or dream about some exciting new stories, this single datapoint could be a good starting point. What is the particle that would be discovered if this were real?

It would be a "heavy stable charged particle" (HSCP). The adjectives are self-explanatory. The particle is heavy, close to a TeV, but it is rather stable so that it leaves tracks and gets confused with a muon for a while. In the supersymmetric context, such particles may arise as hadrons with some partons replaced by a superpartner. So if these modified hadrons are fermions (i.e. superpartners of some mesons), you may call them hadrinos; if they're bosons (i.e. superpartners of baryons), you may call them shadrons.

This is a newly produced TRF terminology – especially in the case of "hadrino" which no particle physicist has pronounced before – so don't expect to be fully understood among professional particle physicists. However, people who play the World of Warcraft will be very familiar with Shadron; his or her or its picture is attached at the top. If you want to meet someone who will be excited about the name Hadrino, try Erlanza Hadrino Prawira from Indonesia. ;-)

Alternatively, it doesn't have to be a supersymmetric hadron counterpart. It may be a "next to lightest superpartner" (NLSP) in theories such as split SUSY (hot because of the 125 GeV Higgs), gauge-mediated supersymmetry breaking (GMSB), universal extra dimensions (UED), and others. They live for some time before they decay to the LSP, e.g. a gravitino in these models.

The signal may look intriguing but it surely looks weak relatively to some garden-variety supersymmetric models that people may have been thinking about; the green sea shows what a generic decaying 600 GeV gluino in those models should look like. Needless to say, there may exist better models that people have failed to think about, for various more or less irrational reasons. The bump will probably go away but if it won't, we could have lots of fun when this mysterious object tries to show his or her charms and muscles in other contexts as well.
Luboš Motl v 9:12 PM
Share