The Euclidean spacetime with signature \(({+}{+}{+}{+})\) is a natural arena for Feynman's path integrals in which many mathematical objects become more well-behaved than they are in the Minkowski spacetime. See Wick rotation. 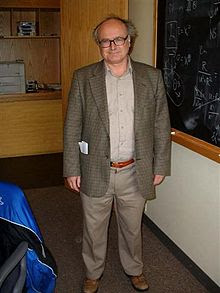 In the Euclidean spacetime, you don't need to worry about signs of \(i\epsilon\). Moreover, Feynman's path integral may actually be rigorously defined in the Euclidean setup while the Lebesgue-like functional measure may be "rigorously" shown not to exist in the physical, Minkowski signature.

In string theory, Riemann surfaces with the Euclidean signature are more easily parameterized and described as genus \(h\) surfaces with \(h\) handles, \(b\) boundaries, and \(c\) crosscaps: discussing and computing with Minkowski-signature world sheets would be a mess.

I am sure Stephen Hawking would agree about this point.

That's one of the reasons why, in 1977, Stephen Hawking teamed up with Gary Gibbons (see the picture above that I took in what used to be my office, as demonstrated by my blue jacket as well haha), extended a paper by Perry and Gibbons (sorry, this more important paper for this blog entry won't be discussed in detail because they don't celebrate 70th birthday!), and studied the Hawking radiation of the black holes in the Euclideanized setup:

This Euclidean way of looking at black holes – and de Sitter space-like cosmologies – brings us a new perspective that has arguably not been fully exploited when it comes to our understanding of the information preservation and other things.


What is the Gibbons-Hawking method about? Imagine that you study a quantum field theory at (absolute) temperature \(T\). This can be done by considering a Euclidean spacetime with a periodic time coordinate \(\tau\sim it\) – now being spacelike – whose period is equal to
\[ \delta \tau = \beta = \frac{1}{kT} \] where \(k\) is Boltzmann's constant. Even in ordinary non-relativistic mechanics, you should know that the expectation values computed using this path integral will express the thermal expectation values. This fact boils to the equivalence between the evolution operator \(\exp(-iHt)\) and the thermal density matrix \(\exp(-\beta H)\) for \(t=-i\beta\); the tracing contained in the thermal expressions \({\rm Tr}\,(\rho L)\) is the source of the periodic identification of the imaginary time coordinate. If you don't already know this machinery, I doubt you will understand it from my ultra-concise explanation. So let me assume you know it.

On the other hand, Stephen Hawking has realized that black holes have a nonzero temperature \(T_H\). That can be translated to some periodic imaginary time, too. Does it play some role in the path integral?

The original derivation of the Hawking temperature involved the operator formalism, especially the Bogoliubov transformation mapping creation and annihilation operators into their linear superposition. But the temperature itself may be seen more easily in the path integral formalism.

The flat plane in polar coordinates has
\[ ds^2 = dr^2 + r^2 d\phi^2 \] and it is completely non-singular near \(r=0\), the origin, as long as \(\phi\) has the right periodicity, namely \(\Delta \phi = 2\pi\). For a wrong periodicity, the geometry would have a singularity at the origin linked to the deficit (or excess) angle, much like a cone that you may create out of a sheet of paper.

And indeed, this is the right Hawking temperature for the Schwarzschild black hole!

It had to work. The Euclidean spacetime with the right periodicity of \(\tau\) is allowed to have a different topology in a finite volume somewhere in the middle, so that implies that the thermal ensemble must also include the summation over the states including the black hole at the right temperature!

A cool thing is that the same procedure may be applied to arbitrary black holes (and black branes) in flat and AdS spaces (and maybe others), regardless of the spacetime dimension, charges, or angular momentum. In all cases, one may find a perfectly nice Euclidean solution whose regularity near the event horizon produces the desired black hole temperature.

I believe that there are many new insights one may obtain from the analytic continuations of this sort and from allowing various topologies of the spacetime and from the "gluing rules" governing such topologies. It's another thing that is mathematically pretty and that many people in the field avoid which slows down the progress.

Getting ready for turning sphere inside out, although in a different way than in the video above

Universe as a black hole inside out

One more cute thing – and it was really a main point of the Gibbons-Hawking 1977 paper – is that such a temperature may be assigned not only to event horizons of real localized black holes. The same temperature may be derived for all "causal horizons" which may include cosmic horizons of de Sitter space, among similar spaces.

One more difference is that the exterior of a localized black hole is infinite so the Hawking radiation never returns back to the black hole that emitted it. The analogous region in de Sitter space is compact: it's the interior of the causal patch. So if the Hawking-like radiation (of an extremely tiny temperature) is emitted from the cosmic horizon inwards, it only flies for a limited amount of time and then it returns back to the cosmic horizon.

Because of this difference, black holes actually lose energy (and mass) by the Hawking evaporation process while the de Sitter space doesn't lose anything: the interior just borrows the energy for a while.

These differences notwithstanding, the analogy between the black holes and the de-Sitter-like cosmologies is very deep and many implications one may deduce out of this analogy are completely valid. (But beware, others may be invalid.) And as I said, the thinking in terms of the Euclidean spacetime and various analytical continuations are likely to be essential tools for a decent understanding of the universality of the Bekenstein-Hawking entropy of the event horizons; of the fact that the information is ultimately preserved; and many related issues.

The analytical continuation to an imaginary time, \(\tau=it\), is an important but limited tool in ordinary flat-space quantum field theory because we're always doing the same thing. On the other hand, space and time may be mixed into many different shapes and topologies in general relativity, so there potentially exist many more ways how to analytically continue things and how to get new insights out of such continuations.

So people, do analytically continue in gravitational theories! Do it much more often than you have done so in the past.
Luboš Motl v 2:49 PM
Share