But it gets repeated every 394.3 years

Czechia may be the most atheist nation in the world but be sure that it doesn't prevent the Czechs from believing any kind as well as all kinds of superstitious crap you may think of. In fact, it's plausible that the almost complete absence of Christianity or another rigid religion gives the people the freedom to believe any nonsense they hear or receive in the mailbox. Human stupidity knows no limits and atheism isn't a universal cure against it.

So some of the most well-known Czech scientists, especially astronomers, actually organized a couple of recent press conferences (plus interviews on TV) in which they tried to deny the widespread reports that the world will end on December 21st, 2012. ;-)

Some of the most courageous Czech musicians claimed that they are not afraid to get pregnant because they belong among the freaks who don't believe in the end of the world in 2012. Last night, Prima Cool – which otherwise broadcasts The Big Bang Theory, Top Gear, Futurama, Simpsons, and lots of other programs – also offered a visually striking "document" from the Discovery Channel, Apocalypse, that is embedded later in this blog entry.


Of course, even if some ancient civilization had believed in such a doomsday scenario, it would mean exactly nothing for a rational person or for science. Millenniums ago, people believed in many kinds of wonderful things that are undoubtedly preposterous. But a thing I want to explain here is that the claims about the end of the world don't even reflect what the Mayan sources said and what this civilization believed to be the case, as Dr Grygar, the most famous Czech astronomer, and others emphasized.

Discovery Channel: Apocalypse (2011). Warning: the full movie contains 44 minutes of Algores on steroids, doomsday crackpots from Scientific American and lots of other loons whom you may have believed to be impossible. Billions of people will die on December 21st, 2012, when the Moon collides with the black hole at the galactic center and with the Pentagon, with a solar flare, and with an invisible Planet X blah blah blah. Now I understand the phone interview about the 2012 apocalypse: it's a whole "science"! ;-)

So what does the Maya calendar actually say about the end of the world?

Nothing. It's a calendar designed to divide time into periods and combine these periods into longer periods, and so on. This is true for any calendar. But every calendar has different periods. How does the Maya calendar look like? Well, they had several of them. The basic two calendars ignored the Moon; the information about lunar stages was only included in a "supplementary series" and I won't discuss it here.

One of the major calendars was tzolk'in, a religious calendar. It ignored the seasons and its very short year contained 260 solar days divided into 20 trecenas (minimonths). The year's length was arguably chosen to coincide with the Mayan pregnancy. How many days are there in a trecena? Well, you should know some Spanish because the term "trecena" is Spanish (invented by the invaders from the PIGS) and it obviously means thirteen, like in tri-cento. The best mathematicians among the TRF readers will even be able to check that 20 times 13 equals 260, indeed. ;-)

It wasn't difficult to decode these things from the Mayan culture because they actually left us whole books of pictures such as this one: 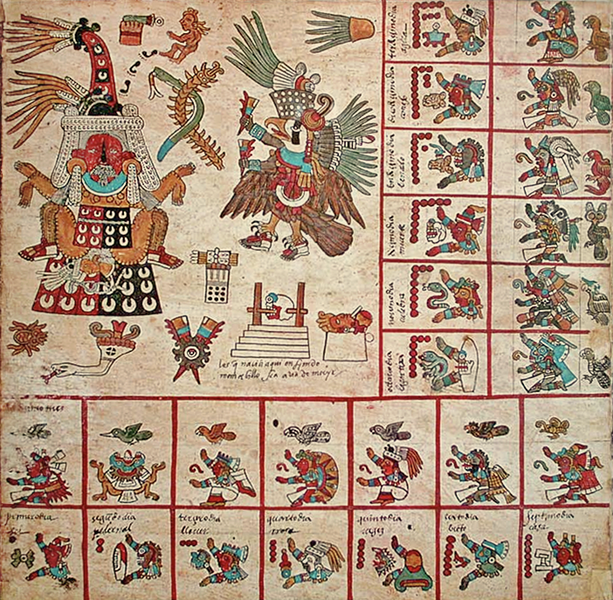 It looks like a pretty modern kitsch, doesn't it? Those Maya astronomers could have been hired by Walt Disney right away. This picture symbolizes one particular trecena, the 13th one. The 20 trecenas had their names and each of them was represented by a 50 times 47 gravatar PNG image, ready for an operating system, displaying an animal on a TV screen. It's pretty clear from the design that the Mayan civilization was using Microsoft Windows before the Spaniard conquered them and brutally forced Linux upon many of them (those who were not killed).

The second major part of the calendar was one that did care about the seasons; it was known as haab'. Note that 365 is approximately 360 which is 18 times 20. So there were 18 short months ("uinal": each of these "uinals" had an icon as well) each of which contained 20 days ("kin") plus a micromonth composed of 5 bonus days (which were actually called "five unlucky days" or "wayeb'" whose avatar was an iron because you may have to do some ironing during these days) in every solar year.

It seems to me that they didn't have leap years so it had to drift pretty badly - by a month each century. Note that the number 18 is forced upon you by the approximate length of the year, 365 days or so. But everything else in their machinery to measure time is based on the base-20 system!

So here are their units of time, with English descriptive names added by your humble correspondent:

Note that the longest unit of time that these ancient folks were using was over 63 million years long. It was enough to measure continental drift. To compare, many degenerated people in the West of the 21st century can work at most with the quad century, or "bak'tun", which is 394.3 years long. Or they don't work with numbers at all.

These are the only two explanations why people started to say that there would be the end of the world in 2012. How does it work?

Before we return to the end of the world, we must understand the beginning of the world. Every calendar has a natural point called "zero". The Jewish calendar started about 6,000 years ago when God created the Heaven and the Earth etc. (plus minus six days or so, and plus minus three minutes for nucleosynthesis), at least according to Isaac Newton's cosmological calculations. The Muslim calendars started about 1400 years ago when an aggressive medieval Arab populist did something famous but I don't know what it was. Similarly, the Western calendar started when people began to be looking forward to the birth of Jesus the Savior in 4 years or so. ;-)

The Maya calendar had a particular beginning, too. The Mayan day zero was believed to take place on August 11th, 3114 B.C. according to the back-extrapolated Gregorian "proleptic" calendar. What happens if you add 13 quad centuries or 13 bak'tuns?

Because of some rounding errors, leap years, and/or missing year zero in particular, this really means December 21st, 2012. So this day is nothing else than the beginning of a new quadruple century according to the Mayan calendar!

Moreover, it seems that the new quad century won't start in 2012 at all. The precise timing of course depends on the correct additive shift, i.e. on the beginning of the Mayan time as expressed in our Western calendar. I said that it was in 3114 BC. The uncertain additive shift is known as "correlation" in these studies and the particular estimate that puts the beginning in 3114 BC is the GMT correlation (Goodman-Martinez-Thompson).

However, there exists some pretty strong recent evidence that the right beginning of time is actually 104 years closer to our age: it was in the year 3010 BC (plus minus one). This is based on papers by Böhm and Böhm from 1996 and 1999. Their names sound German but these men are actually Böhmisch, i.e. Czech. And their research was supported by a paper with many more Czech authors, including the boss of the Czech Astronomical Society Mr Vondrák (as well as Mr Klokočník, Mr Kostelecký, and Mr Vítek), in 2007:


Correlation between the Mayan calendar and ours: Astronomy helps to answer why the most popular correlation (GMT) is wrong (Astronomical Notes 2007, abstract)
First page for free (PDF)

If they're right, the actual end of the world doesn't come in 2012: it arrives in 2116. Moreover, it's not really the end of the world. It's just the beginning of a new quadruple century, something that happens every 394.3 years, anyway.

This was the basic picture. I think you must agree that the number of misconceptions about the Mayan calendar and its hypothetical implications is stunningly high. People are saying things that are wrong at every conceivable level – from historical errors about the Mayan interpretations to confusions between a new cycle and the end of the world, to incorrect ideas whether it would mean something, to underestimating the knowledge of long periods of time by the Mayans, to complete ignorance about maths, science, astronomy, and history.

Hundreds of millions of people who parroted this story about the end of the world haven't made the simplest possible checks they could instantly make. If they invested 5 percent of time that they invest into promoting this fear and concept into some research instead, they would know that the doomsday story is ludicrous at every level and why. They just prefer to take similar rumors about the apocalypse seriously or semi-seriously. As Dr Grygar said, people apparently love to scare themselves. They are also much more uninformed when it comes to numbers and astronomy than the average people in the Mayan civilization. Sad.

At the bottom, you may insure yourself against a December 21st, 2012 catastrophe. If more than 1 million people (in the world) die on that day and it's shown that it wasn't a deliberate human genocide, I will send you 100 times the money you send me by PayPal today or this month.
Luboš Motl v 7:55 PM
Share