Canada became the first country that has withdrawn from the Kyoto protocol a month ago. NASA's experts similar to James Hansen and CapitalistImperialistPig have already incorporated this event into their models.

The result is described here:


We are being told that the Armageddon is going to begin in Canada – especially in Alberta (no kidding) and the vicinity of the oil companies' headquarters in particular – and all ecosystems are going to move northward by 2100. Canada is already so hot today that another degree of warming would almost certainly exterminate everything that is alive, NASA implicitly argues.

Another source describes the paper as follows:

How did the NASA "experts" determine that Canada, and not the U.S., is currently the primary villain causing global warming? It's simple. The reason is that Canada has a more conservative government than the U.S. these days, something that is sort of unprecedented in the historical context.


NASA's "experts" and their comrades also insist that a smaller amount of CO2 from Canada as well a few kilograms of methane and soot is now more important for the urgent fight against the global warming apocalypse than everything else. The only way to avert the apocalypse is for Canada to become a province of Cuba, to adopt a Marxist government, and join the Kyoto protocol again.

These commies are so transparent, so predictable, so primitive, and so instinctively driven jerks. And they have always been.

There can be almost no doubt that those folks first decided that they need something catchy that involves Canada – a country that has been so disobedient lately and so dangerous for "the cause" – and then they simply produced this bogus research that was pre-ordered.

If one wants to see what and who is behind similar "research" by NASA, it may be more appropriate to look at the Huffington Post:


If You Care About Keystone and Climate Change, Occupy Exxon


Occupy Exxon and Canada because NASA has already been occupied. ;-) Well, maybe there is an even more accurate primordial source of the research on Canada:


Greenpeace says so. :-) While Kyoto has made it legal for countries to withdraw, you should have no doubts that Greenpeace's fifth column in the country of the maple leaf is already trying to challenge Canada's withdrawal (Reuters).

Various sources have discussed a potential game-changer when it comes to fossil fuels: there could be lots of methane hydrate deposits everywhere in the world ocean.

Nature says that tests have already started in Alaska where they try to pump CO2 into some holes to get the frozen methane out of the seabed more easily. 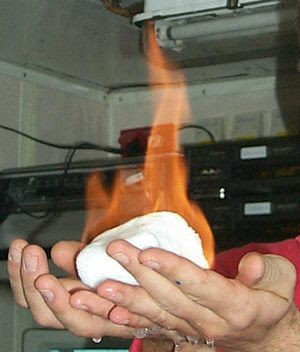 The Sunday Times describes these findings in an enthusiastic way: the world reserves of fossil fuels may have just doubled (or more).

All the champions of the peak oil – greetings to Alexander Ač – as well as various people hoping that the fossil fuels would be abandoned under their supervision will probably have to swallow a bitter pill. Meanwhile, the idea that the CO2 concentration will peak closer to 1000 ppm than 600 ppm is getting more likely.