Time for another climate edition of the Centennial Courier by Mr Ivan Motýl [Mr Ivan Butterfly]. Let's look at the beginning of the year 1912 from the perspective of Prague.

Butterflies took off, ice-hockey is suffering and the beer is warm – or: a strange winter

Czech ice-hockey was significantly suffering in January 1912. People were vainly waiting for ice to cover rivers and ice rinks, something they were used to from other years.

January 8th, 1912: Do you think that this winter is a strange one? One hundred years ago, the situation was similar. The owners of ice rinks were whining about the lost profits and pastures turned green.

"A genuine winter weather has been a dream for quite some time, a weather that would bring us a bit of winter scenery, one that would donate ice to the innkeepers as well as the joy of winter amusement to the youth," the publicist of National Politics complained on Monday, January 8th, 1912.


Shrovetide began in a crazy way

The weather one hundred years ago conspicuously resembled the current one. Snow was lying in high mountains only. All other places have only been waiting for snowflakes from mid December to no avail. Instead of snowflakes, streams of water were falling from the clouds, occasionally replaced by ice pellets. Sometimes the thunders sounded like those during the hottest summer days. When snow appeared somewhere after all, it would quickly melt. That's why everyone was talking about the April weather back in January 1912. For example, this is how Sunday, January 7th, 1912, looked in Prague: "The weather has played a game we normally associate with April. In the morning, balmy spring air was scanned through by the sunshine; in the afternoon, the wind and rain occurred; in the evening, it was suddenly chilly and snow arrived. Just like in the fastest transmutations we know from the fairy tales, the whole image on the stage got suddenly different, black roofs and streets became white, the frost was painting its bizarre flowers on the windows."

However, the fresh snow disappeared immediately on the following day. For example, at noon on January 8th, 1912, [your humble correspondent's] royal city of Pilsen already saw "thunders and rain just like in the summer". Similar news were coming from the whole Bohemian land. "Both the Goodwater village [Dobrá voda] and Rokycany [a town near Pilsen] were occupied by a powerful thunderstorm we usually experience during the most brutal heat waves only. As a beholder might see, the carnival also began insanely in Nature."

The champions of Europe as well as innkeepers lack ice

The greatest victim of the weather was Czech ice-hockey. "Hockey has suffered a damage that will be hard to undo. [They spelled it 'hockey'; funny, it became "hokej" in contemporary Czech.] Because our matches against Canada have been thwarted and our players were denied a training, we as the defenders of the European champion title are facing a bothersome circumstance."

The Czech ice-hockey hadn't known covered air-conditioned halls yet. Ice rinks were overtaken by mud and ponds remained without ice. Sport clubs had to cancel the usual competitions in ice-skating. Among others, the famous race on the "Jordan" pond near the town of Tábor was cancelled. Sport reporter of the National Letters even dared to predict that such a winter "will become the funeral of the Czech skating industry." 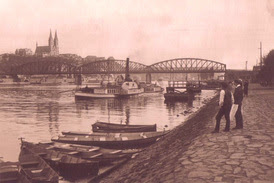 Futile waiting of Prague's ice miners and innkeepers for ice. The Moldau River beneath the castle of Vyšehrad, 1912.

In the countryside, it was easy for geese as well as cattle to graze. Above Smíchov, a neighborhood in Western Prague, butterflies took off: "The son of railroad foreman Mr Em. Bouška of Picka's lithography in Smíchov caught an alive butterfly yesterday," National Politics announced on Tuesday, January 9th, 1912. And the town of Soběslav [Saw-b(y)e-slaff] in Southern Bohemia sent the following report on the same day: "Fields and meadows are greening like if it were spring. Even the oldest citizens here fail to remember such a thunderstorm and hailstorm we have gone through."

Five minutes of Old Prague in 1912; no sound. Trams were going to the Old Town Square. Note that almost everyone wears a suit or robe of a sort. Compare with San Francisco in 1906, Prague in Spring 1968 and Prague in 1966 in a Czech version of Mrs Robinson. (The singer, Mr Václav Neckář, returned to the top of the Czech hitparades after 46 years and a stroke.)

The warm weather has made the innkeepers very unhappy, too. They couldn't extract ice from the rivers for their barroom's cellars while the ice reserves from the previous winter had been depleted. There was a real danger that the Czechs could soon be forced to rely on disgustingly warm beer.

See other TRF translations of the Centennial Courier (internal search here). For another comment on the atmosphere as seen 100 years ago, see Steve McIntyre's Toronto 1912.

If I were born 100 years ago
in this town...
I would be picking flowers for my bride
on the Larisches' garden.

She would be the shoemaker's wife
of the Kaminskis' house somewhere in Lvov
[two verses in Polish:]
I would love her and caress her,
perhaps for two hundred years.

We would be living at Sachsenberg,
in the house of Kohn, the Jew.
The prettiest among all the Těšín's jewels
would be her.

She would be speaking Polish and a bit Czech,
a few German words and her smile would be nice.
Once a century, a miracle may take place,
a miracle does take place.

If I were born 100 years ago,
I would be a bookbinder.
I would work in Procházka's firm from 5 am to 5 pm
and would be getting 7 guldens [zlatek] for the job.

I would have a pretty wife and 3 kids.
I would be healthy and about 30 years old.
All the wonderful life in front of me,
the whole beautiful 20th century. ;-)

If I were born 100 years ago,
in another age.
I would be picking flowers on the Larisches' garden
for you, my love.

The streetcar would be driving uphill across the river,
the Sun would be lifting the latch on the border.
And the scent from the holiday lunch
would be leaking from the windows.

In the evening, the ancient music by Mojzes
would be sounding.
It would be Summer 1910,
and the river would be flowing behind the house.

I can see it as if it were today: a happy myself,
wife, kids, and the Těšín skies.
The only good luck is that one never knows
what lies ahead... [Nah nah...]
Polish version of the song is available, too.

Some history of the town

A happy Austrian-Hungarian town of Teschen became the subject of a Czechoslovak-Polish territorial conflict after the World War I.

It has even led to a 7-day war between Czechoslovakia and Poland. The city was ultimately divided along the river in 1920, with the smaller part going to Czechoslovakia as Český [Czech] Těšín.

The city was re-unified as Poland occupied it in 1938. It remained unified as town of the Third Reich when Poland was defeated in 1939. In 1945, the city was divided along the river again. Poland finally abandoned its territorial claims in 1958 but communism would continue for 30 more years. The hardcore latches dividing the town would disappear in 2007 when both countries joined the Schengen zone.

All the palaces (Larisch, Sachsenberg: a local beer, too), trams (built in 1911) etc. in the song are real. The shortest tram circuit on the current Czech territory was abolished in 1921 because the border controls made the route unusable.
Luboš Motl v 6:37 PM
Share