Why some people demonize Ron Paul

The 2012 U.S. presidential primaries have begun. Barack Obama is nearly guaranteed to get the Democratic ticket. The G.O.P. race started with the Iowa caucus. Just to be sure, a caucus is a gathering of the party members who discuss the most appropriate candidates and at least in the case of Iowa, the electors are being picked at a proportional basis. 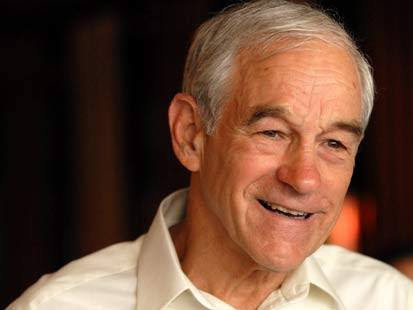 On the other hand, the first two spots are really a statistical tie: the difference was 8 votes. All three candidates on the medal spots are likely to earn 6 electors from the state.

You may have noticed that I am not the greatest fan of Romney even though he's been my governor for 4 years ;-) and even though he's technically a fellow church member with my father and sister.

(My sister – greetings – may have switched from Mormons to Tarots, however. I am not sure whether Mormons support burning of the witches.)

But the guy I want to discuss is Ron Paul, the true libertarian candidate. Although I don't agree with some of his analyses concerning the gold standard and even though I am a kind of military hawk who wouldn't be happy to see America giving Iran and similar countries the right to act in any way, the hysteria that the ultimate peaceful and balanced candidate such as Ron Paul is able to ignite in some people looks incredible to me.

We may start with the nutty and ugly ones. Capitalist Imperialist Pig has written dozens of dumb attacks against Ron Paul. The amount of vitriol directed at the doctor is so high that I start to be afraid of a rising competition with Ron Paul's face (when it comes to the amount of vitriol dedicated by Pig to various people).

But there's one critic of Ron Paul who is even more notorious than the Pig: the ManBearPig.

Both viewers of Al Gore's famous Current TV could have seen that the inventor of the Internet and one of America's most repulsive jerks can't distinguish the fantasyland from the non-fantasyland, the existence of a ceiling from its absence, 91% from 9%, and so on, and he is not capable to offer a single idea. However, he's sure that he would love to humiliate Ron Paul.

The young Turkish as*hole supports Al Gore in his efforts. In their planning, Al Gore and others shouldn't forget about the minus sign they carry. If Al Gore criticizes someone, it's damn reasonable to think that this someone has something deep, important, and true to say.

These Gore-like socialist scumbags and freedom haters are clearly shit*ing into their pants when they see a candidate like Ron Paul. They're scared that someone could actually start to deconstruct the Big Government and the intrusive international organizations. And they're scared that people could have seen that most of these super-constructions have been useless or worse.

Bradley Burston wrote an article Thank God for Ron Paul in the Israeli left-wing daily, the Haaretz. I needed some time to figure out that the title wasn't serious. Again, it's a rant that doesn't contain a single idea. The only message it wants to convey is that you shouldn't be looking at Ron Paul seriously. The author clearly hates him. But it doesn't offer a single rational argument for this attitude.

I am not really afraid that Ron Paul would use his ideas about the monetary system to deconstruct the U.S. or global economy. At the end, his desires would have to go through the filter of many other people and he would likely understand what's wrong or unnecessarily dogmatic about his ideas about the gold standard, inflation, and other things. It could be refreshing to see what he would try to do.

In a similar way, I am not quite afraid that he would allow the rogue states to become the masters of the world. After all, similar fearmongering isn't always justified. America is surely wasting lots of money for defense that doesn't lead to genuine results – and that sometimes leads to counterproductive results.

Your humble correspondent isn't the kind of "libertarian pacifist" who thinks it's right to ignore the evolution in all other countries in the world and avoid interventions. But Paul's viewpoint is still a legitimate attitude, a major one, one that is connected with the basic values underlying our civilization. These are the ideas that have powered the Enlightenment and that could have been considered completely mainstream and refined at least until our societies have begun to employ huge bureaucracies that could originally look like good and obedient slaves but they have often become tyrants that control our lives and bother us, rob us, and weaken us in thousands of ways.

Special discussions would be needed to analyze the cancellation of the Federal Reserve and many other steps he's advocating. At the end, I wouldn't really decide to be responsible for most of these changes myself. But the people trying to paint Ron Paul as an extremist, trying to remove him from the consideration of intelligent voters, are just unacceptable for me. For me, these people who want to make libertarianism or classical liberalism "extremist" are counterparts of Stalin or Hitler and they should be treated in that way.

A regime wouldn't be a democracy if a candidate like Ron Paul wouldn't enjoy the dignity that a serious contender for the White House deserves. People like Pig, ManBearPig, Young Turks, and others work hard to stop democracy in America. So far, this is not an official endorsement of Ron Paul by TRF ;-) but it is surely an acknowledgement of our common enemies who are the enemies of freedom and democracy, too.
Luboš Motl v 7:39 PM
Share