QC UCSB expert: quantum computing may be 5 years away

Vancouver is hosting the annual meeting of the AAAS, an organization of left-wing scientists whose aim is to promote and politically abuse science. AAAS has also played quite some role in the promotion of the global warming hoax. 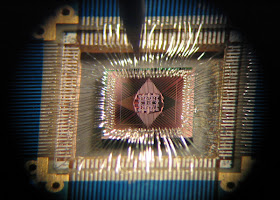 Despite the annoying political background of this body, there are some interesting talks. Vancouver Sun writes about a few talks and discussions on quantum computation:


Quantum computing could be five years away, expert suggests

The guy who offers the bold 5-year timeframe is Dr Martinis of Santa Barbara. Quantum computing may actually be one of the "crisis scenarios" that politicians should think of. Why?


Well, the electronic safety of our documents and signatures etc. depends on codes that could be broken with quantum computers, at least some of them could. That could be tough. A villain who conquers this future technology could do some very nasty things.

It seems very likely to me that if quantum computers are ever developed, they will be first used to crack the old codes, and only years later, people will actually work on a new system of algorithms that may be encoded with the help of existing quantum computers but can't be cracked by them.

In my opinion, every important institution should discuss some policies how to return to a mode of operation that is independent of the codes that could suddenly become vulnerable. In some cases, such a switch could mean to return us – when it comes to information technologies – into the past by decades. But this setback would hopefully be temporary and more tolerable than the conceivable attacks by the malicious people controlling the new technology.

Many people have said many stupid things about quantum computation. Many but not all anti-quantum zealots of course believe that quantum computation is impossible because the world must be fundamentally classical and a classical computer of a given size can't solve certain problems after a certain number of steps.

So quantum computers are almost certainly possible in principle. In practice, one must overcome some engineering problems – the dragon of decoherence – but the obstacle is not exponentially large.

In other words, the Copenhagen interpretation or any of its modern updates such as the Consistent Histories interpretation make perfectly valid predictions what will happen with a quantum computer so it's obvious that these interpretations aren't ruled out in any sense. The only way to rule out a hypothesis is to actually find a wrong prediction that the hypothesis makes, one that disagrees with observations. Various anti-quantum zealots love to use some "alternative", non-scientific ways to falsify theories. A theory doesn't agree with their medieval prejudices so they just decide it means that the theory has to be abandoned. But science hasn't worked in this way for 500 years. What a prejudiced bigot a priori thinks is totally irrelevant in science.

For a complex enough system of quantum degrees of freedom – and a quantum computer is a great example – Copenhagen-like interpretations where the probabilities are fundamental are the only method to consistently predict what will happen. Pilot-wave-like theories fail because one can't isolate any "beables" for discrete quantum degrees of freedom such as qubits (e.g. spins); many-worlds interpretation fails because it's not a well-defined framework: it doesn't tell us when the Universe split and it doesn't really explain the origin of all the numbers that quantum mechanics is all about – the probabilities. And I could continue.

Quantum computers demonstrate the power of quantum mechanics, the fundamental framework underlying the laws of physics in our Universe, very crisply and if and when they will be produced, the world may substantially change, at least at some level. Let's hope the change won't be catastrophic.