RSS: temperature trend in the last 15 years is negative

We've been emphasizing for a few years that in the last decade, the global warming trend wasn't statistically significant and according to most datasets, it was actually negative: linear regression produces a cooling result. 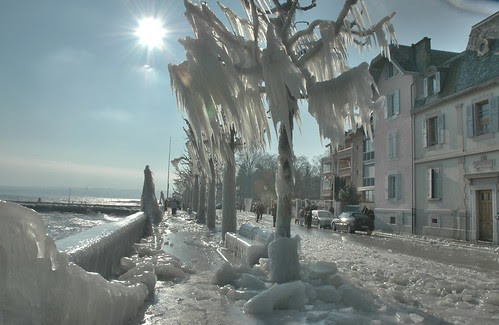 Global warming as seen in Versoix, Switzerland in James Hansen's hottest year ever, 2005

However, aside from 10 years, there's always been an interesting discussion about the last 15 years. Some skeptics were happy when Phil Jones admitted that there was no statistically significant warming trend in the last 15 years.

Now, the times are changing. The debates about the statistical significance of the 15-year warming trend are gradually becoming irrelevant. Even when we talk about 15 years, the trend has actually been a cooling one!


Take the RSS dataset and list the anomalies in the most recent 15*12 = 180 months, from February 1997 through January 2012. Apply linear regression to these 180 datapoints. What trend will you get? Remarkably enough, you will get –0.073 °C per century, a negative value! Obviously, this tiny negative value isn't statistically significant by any stretch of imagination.

Here are the trends in the last Y years ending by January 2012 for Y equal to 1...20:
The RSS global warming trends are in °C per century. It's likely that the last 15 years will remain cooling at least for one more year because the 1997-98 El Niño will be kept near the beginning of the interval for much of this time.

Note that 15 years is a pretty long time. If 15 years are not enough for the hypothetical warming trend to beat the other, less uniform and less predictable drivers, it's probably not too fast, strong, urgent, or important, is it? If it is detectable at all...

Disclaimer: the absolute values of the trends above are naturally decreasing as a power law. The initial ones may be very large. For example, the cooling trend in the last 24 months or 2 years was –28 °C per century.

Of course, you can't really extrapolate this 2-year trend to a century. Or you shouldn't. But even if you study longer periods of time, like 15 years or 30 years, it is very clear that you shouldn't trust extrapolations too much.

Incidentally, because I mentioned El Niño, I shouldn't forget to say that it's pretty clear that the ongoing La Niña will end within a month. Near the South Pacific beaches, the temperature anomaly is already positive and it seems clear to me that the positive anomalies will spread to the West during March. While the ongoing La Niña conditions could have looked like a La Niña of the century, it will actually end up being just a marginal La Niña. It won't be far from the critical point when the duration would be insufficient to declare it a La Niña episode!

Still, the delay guarantees that the first half of 2012 will see global temperature anomalies that are not high and positive, to say the least, so 2012 shouldn't be much warmer than 2011 and may be even cooler than the last year which was pretty cool.
Luboš Motl v 6:30 PM
Share