Willis Eschenbach has performed a very interesting analysis of the ocean temperature data from Argo, a system of floating probes.


Jason and the Argo Notes (WUWT)

Here you can see the surface temperatures obtained by averaging at each point and using about 700,000 measurements that have been done as of today: 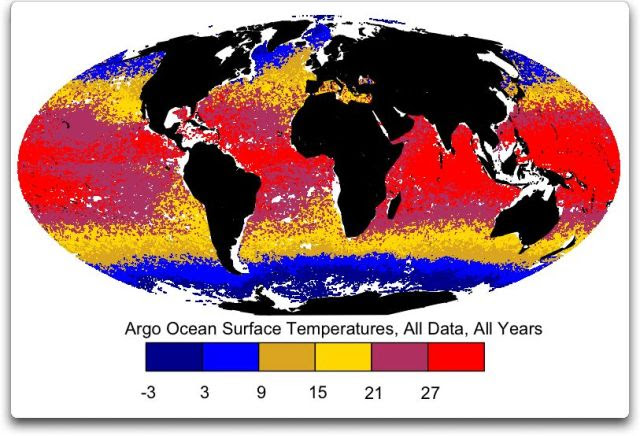 Note the warmer waters near Northern Europe (and Britain); that's caused by the Gulf Stream. Click the pictures to zoom in.

However, Willis has also produced an interesting histogram.


The histogram of temperatures is sorted according to the latitude and it looks like this: 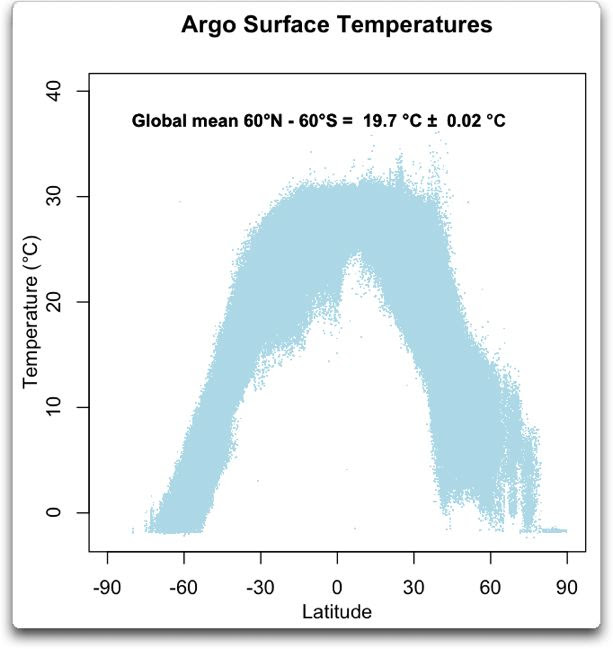 You see that the temperatures generally decrease from 30 °C to 0 °C or so as you get closer to the poles. The lower limit on the temperature seems to be around –1.5 °C: the devices have to decide how to operate or stop when the ocean starts to freeze over. Otherwise be sure that the ice may reach temperatures much lower than –1.5 °C if it's thick enough; if it's thin sea ice, the temperature can't deviate from the temperature of the nearby liquid water which can't really drop too much below 0 °C as you know very well.

However, interestingly enough, there's also a pretty sharp flat plateau at the top: the instant temperature never seems to exceed 31 °C or so; you may expect a smoother curve at the top instead of a plateau. Willis finds it surprising because of this argument:


Note that there is an obvious upper limit to the ocean temperatures, the “flat-top” on the graph at just above 30°C. No matter how much incoming solar there is, the ocean doesn’t get any warmer than that. This provides a “cap” on how hot the ocean can get. Above that temperature, any extra incoming energy is converted to latent and sensible heat, rather than warming the surface.

It sounds like a good way to make you puzzled, too. ;-) Where does the sharp transition near 31 °C come from? However, I, for one, won't share this excitement or confusion with Willis. In particular, the main problem is with his words "no matter how much incoming solar [radiation] there is". This sentence makes it sound as if the Sun sometimes doubled or tripled the output.

But that's not the case. The reality is that no matter how much solar radiation you would like to get to construct your flawed arguments, you always get those 1342 Watts per square meter. This is the maximum amount of energy reaching a transverse plane and measured in empty space.

The atmosphere reflects and absorbs a certain fraction of this energy (one should divide the energy according to height, frequency, and direction), the ocean does the same, and the ocean also radiates its own thermal energy and evaporates its water in a temperature-dependent way. There are dozens of things that you should incorporate – via a differential equation that should depend on the altitude etc. – but my point is that this exercise is doable and the surface of the ocean is still a very uniform and "simple" environment. So the problem we just wanted to solve is "unique" and its results are universal – they hold pretty much everywhere in the world.

When the Sun is shining from the optimum "heating" location, probably straight from the top, the conditions are always pretty much identical, so you are guaranteed to reach an identical equilibrium temperature, too!

In fact, the maximum latitudes where the plateau reaches in the horizontal direction – where you may saturate the temperature limit – is pretty much going from –23° to +23° which reinforces the idea that the warmest temperature, around 31 °C, is reached when the Sun is shining vertically (which is possible everywhere in the tropics at some point, in the latitude interval –23° – +23°) and when there are no clouds. In this "optimum weather", all parts of the atmosphere and the ocean always arrange in pretty much the same way and the ocean surface temperature simply reaches 31 °C.

People including me (and especially the climate skeptics) often like to say how complicated the climate is, and so on. But we shouldn't forget that in many contexts, the physical problem is rather simple, clean, and doable. I am confident that a proper physicist who studies this physical system – or another system – has to know these simplified situations very well. This is the real knowledge he or she builds upon. Starting with hopelessly complicated situations that can't be solved simply isn't the right scientific attitude. The right scientific attitude is to cover the "space of possible situations" by special cases which are solvable and whose physics you largely remember and by calculating the more complex intermediate problems by various detailed numerical and perturbative methods and interpolation.

Sometimes, a computer or a long, unreadable calculation is needed to figure out what we need to know. But we should still be able to understand the clean situation, perhaps on the top of our heads. The oceans without clouds and with the Sun above your head is an example of such a clean and omnipresent problem which is solvable by a set of ordinary differential equations. One of the results you should be able to get in this case is that the ocean surface temperature is close to 31 °C in this setup. This result is universally important and omnipresent across the globe (well, the tropics).

Note that near 31 °C, there's already a lot of water vapor around (in the nearby atmosphere) and it arguably dominates the greenhouse effect. I think that in such ocean conditions, the carbon dioxide will tend to be rather irrelevant in comparison. This means that you can't really exceed something like 31 °C in the vicinity of the ocean. And it's still pleasant to live near/in 31 °C warm water, isn't it? Such water is warm but it still cools your 37 °C body. That's one of thousands of reasons why it's totally irrational to be afraid of global warming.

When we observe the land, the situation changes because the albedo is different – think about some asphalt etc. – and one may often reach temperatures much higher than 31 °C. That's where the hot weather becomes unpleasant or dangerous (especially for nations that haven't invented air-conditioning yet even though they have already invented and overused asphalt). However, the bulk of these unpleasant temperatures doesn't have much to do with the greenhouse gases; it's mostly about the albedo, heat capacity, heat conductivity, and other properties of the solid surface.

Willis is also surprised that the Argo ultimate average temperature, 19.7 °C, is significantly lower than 20.3-20.5 °C obtained by previous methodologies. Well, despite the insanely low error margin of 0.02 °C that some of the old measurements boast, I am not surprised at all. 0.7 °C is just an extremely small temperature difference. Very small changes of the methodology – where is exactly your "surface" (especially in the presence of waves or sea ice) and whether you allow the thermometer to be heated by the Sun at least from one side etc. – are guaranteed to influence the result at least by tenths of a degree.

Measuring ocean temperatures may become an "exact science" at some point and the temperature differences obtained by the same methodology may give you some very accurate information about something but you simply can't expect that different "seemingly equivalent" vague definitions of the ocean surface temperature will yield "totally identical" values. The ocean-air interface is still a pretty messy environment and one must be extremely specific and careful about the definition of your quantities if you insist on a meaningful high-precision discussion of these quantities.
Luboš Motl v 7:37 PM
Share