97% of DailyKos readers: Mann is dishonest

DailyKos has brought us a nice example showing how problematic it is to rely on majorities and how the counting depends on the ways how the poll is engineered.

In the article called


Michael Mann is a Modern Hero and we need to acknowledge that!,

comrade Mr Don Mikulecký (yes, it is a Czech surname) argues that Michael Mann is a replacement both for Jesus Christ and Albert Einstein. There's a formality on the page: he wants the readers to confirm his thesis. The results look like this: 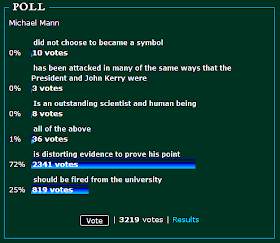 Have you heard about the percentage 97% before?


Based on the Occupy Everything movement, DailyKos represents 99% of the U.S. population, or at least 99% of the hardcore commies and politically correct ideologues in the U.S., and 97% of them think that Mann is either distorting the evidence and/or should be fired from the university. He should be fired according to 1/4 of the DailyKos readers. (After some hesitation, I joined this group of voters as well but that's only because the poll didn't offer the answer "Mann should be arrested.")

Of course, I know where this result comes from. The voters are not the "most typical" DailyKos readers. Most of them are "occasional" DailyKos readers who are mostly WUWT readers: WUWT posted an article about this celebration of Michael Mann which helped to improve the results of the poll.

Still, this ironic poll shows how such things are easily abused. If climate activists suggest that who participates in their poll and says that "there is no climate problem" will face some trouble or will be ostracized, while those who say that "there is a problem" will be cherished as allies of the movement, and if they look for respondents in corridors in which the latter group prevails anyway, it's just not shocking they can get ludicrous figures like 97% of climate scientists in favor of the climate alarmist propaganda.


WUWT may do the same thing in reverse – and, in fact, obtain the same numbers in the opposite directions on the enemy's soil! One really can't and shouldn't pay serious attention to such polls. When someone is able to construct a set of people in which 97% of the members respond "Yes" to a question, it means absolutely nothing about the true answer to the question. It doesn't even say much about the actual people's opinions about this question – and these opinions may still be very different than the truth.


P.S.: While DailyKos was apparently unable to control the results of the poll, they managed to impose a total, hyper-Stalinist censorship over the comments. Still, some comments against Mann's science made it through. They implicitly agreed that Michael Mann is a replacement for Jesus Christ which allowed them to circumvent the filters. One reader, Sigurdur, wrote:


I am not a troll [the inconvenient voters were identified as "trolls" in a previous comment by Mr Mikulecký], but one who has studied climate for 30 years.  Dr. Mann's material does not follow any botanists interpretation of tree rings.

Dr. Mann's reconstructions of past temperatures with his selected proxy data have such wide error bars that they are virtually useless.

I am sure Dr. Mann is an honorable fellow.  He just doesn't know science rigour.


Was it respectable enough a comment to be tolerated as a part of the DailyKos discourse? Don Mikulecký's reply shows that this question is a rhetorical one:

Came here to do this?


So that was the end of Sigurdur at DailyKos. DailyKos' (Caucasian) Georgian colleague has ended the life of 40 million people in an even more irreversible way. You shouldn't expect apologists for Michael Mann to be intrinsically much better than that. The only thing you may hope for – and try to help – is that they don't get the same opportunity as their Georgian colleague.

David Suzuki, for example, recently argued that even if it's shown that all the alarmist propaganda is wrong and all alarmists were spreading it because they were corrupt, it would still be right to "deny the deniers their right to deny", i.e. to cripple basic human rights in the world, because David Suzuki finds honest people's findings about the climate inconvenient.
Luboš Motl v 7:57 AM
Share