According to the Prague Monitor, Czech and Polish president Václav Klaus spoke at a meeting of the Union of Czech Mathematicians and Physicists (which was founded exactly 150 years ago) and regretted the declining prestige of maths in the Czech society.

The trained economist whom your humble correspondent has talked to several times has always protested against the removal of maths from the compulsory secondary school leaving exams, something that took place in spite of his opinion. Only the Czech language and literature (taught as one subject) is compulsory; the other subject is being chosen by the teenagers in between maths and a foreign language.


Klaus said that the declining expectations in the knowledge of maths are correlated with the general deterioration of the quality of the higher education. University diplomas are starting to be distributed to pretty much everyone and anyone, pretty much every mediocre moron, Klaus said using his own diplomatic words.

I could enumerate hundreds of idiots by name who have nevertheless got a college diploma and President Klaus could add thousands if not tens of thousands of names. ;-)

He has said many other important and wise things, for example:


Mathematics is not about counting or formulae, but about a way of thinking. Understanding mathematics and the capability of using it in real life cannot be substituted by the best possible calculator.

I couldn't agree more and I think that Klaus describes the situation and trends not only in the Czech Republic. However, it's still true that among the 41 OECD member states, the Czech Republic has recorded the very worst pupils' attitude to maths and natural sciences (in 2003) and the very fastest decline of this attitude. If someone believes that the most atheist industrial nation inevitably has to be a leader in maths, I have just disproved the theory – in a brutal way. Also, last year, when the compulsory math test was tried once, 10% of the kids failed in it.

Just to be sure that you know something about my ethnic background. ;-)

What do you think, Miss USA contestants? Should maths be taught at schools? I added this good old video (a parody of a similar real video on evolution) just in order to think that the Czech situation may be the worst one in the tables but it's far from being exceptional.

Let me offer you a translation of his speech.

thank you for your invitation to the today's ceremony which takes place during the beautiful, already 150th anniversary of the founding of the Union of Czech Mathematicians and Physicists. Our nation doesn't have too many comparable institutions that may celebrate a similar anniversary.

LM: Off-topic but related to Klaus: a fun 1990 discussion between Václav Klaus and Milton Friedman on the need to get the government from the back of the people.

I am thankful for your invitation for a person and as a person who is neither a mathematician or physicist but who has loved mathematics throughout his life, a person who was even trying to read your journal "Progress in Mathematics, Physics, and Astronomy" in the 1970s and 1980s, a person who realizes that he couldn't surpass the elementary college material on mathematics and mathematical statistics by too much, nevertheless a person who is worried when he sees the current world, or some of the media-savvy but unusually superficial people lacking humility, as it or they are attempting to circumvent mathematics, avoid it, and deny its importance and our need to nurture it. I would love to wish your union to exist at least for additional 150 years and to keep on working on the defense of maths and knowledge in general and to protect our country from a further decrease of the citizens' mathematical skills.

The current non-good evolutionary trend in the views on mathematics which we shouldn't try to overlook or deny certainly isn't caused by maths itself although it's probably true that not every teacher is teaching the subject in a way that the students and pupils find attractive. Instead, this trend is linked to the more general problems of the decreasing level of universal standards, not only in maths, and to the extensive growth of the number of students which totally inevitably reduces the quality of the teaching process. It is also linked to the open levees allowing people to gain university diplomas en masse in questionable subjects that don't include maths as the necessary gatekeeper. It is linked to the deeply erroneous belief that the information technologies will liberate us from the duty to learn mathematics. 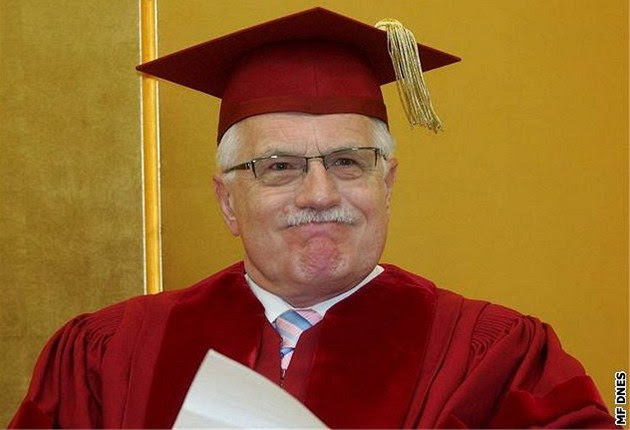 Outside the mathematical community, only a few people realize that mathematics isn't about the "merchants' calculus" [straightforward arithmetics] or about particular formulae but about a way of thinking. To comprehend it and to apply it in the real life requires skills that cannot be replaced by a calculator in our cell phone, however sophisticated it could be. It's exactly the process by which one may reach the result that is the ultimate key. To use mathematics means to refine one's logic and his or her skills to work with abstract concepts. No other subject may teach us these skills as well as mathematics can. That's another reason why I think it was a serious mistake not to include maths among the compulsory subjects in the high school final exams. I have always protested against this decision. However, some of the "great" – I mean those "cherished by the media" – ministers of education even declared this elimination of maths to be the main goal of their work as the minister.

Your union should also actively participate in the neverending struggle to protect the quality of our schools. I am far from being a man who would talk about their quality from an elevated, macho, worldly perspective, which is what some of our compatriots unfortunately like to do, but some tendencies are obvious and they're unfortunately no good. It seems indisputable to me that the further we climb from the first grade of the elementary schools, the more visible the decline in the quality becomes. In fact, it can't be otherwise – it's the law of diminishing marginal returns, well-known to us economists, applied to another situation. And it does hold in a vast majority of human activities including education. I realize that it's unpopular to say such things in our Academic world but it's necessary to say it, anyway. 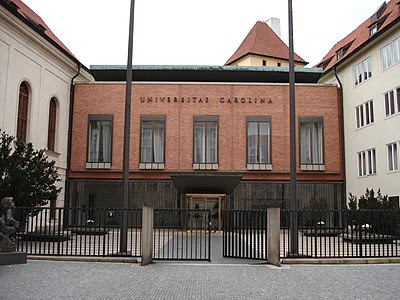 LM: Yes, Karolinum, that's where people like your humble correspondent graduated, a dormitory from 1348

But you will be discussing these issues for the whole day. I wish you a maximal success in your proceedings and thank you for your invitation once again.