ICARUS: the neutrino speed discrepancy is 0, not 60 ns

The OPERA detector originally detected neutrinos that were arriving to the Gran Sasso cavern (or tavern) in central Italy 60±10 nanoseconds too early after their 730-kilometer (2.4 milliseconds) trip from CERN. If that were so, they would have been 0.0025% (25 ppm) faster than light in the vacuum.

Many of us remained sane and realized that this can't happen; it follows that the OPERA was out-of-tune. And indeed, the mistake was found in the timing: loose cables and wrong interpolation in the GPS synchronization procedures have to be blamed for up to 100 ns and dozens of ns in the opposite direction. (And maybe other things they haven't found or announced yet were wrong, too.)

Even though some physicists incredibly enough remain ambivalent, it's clear that most of the discrepancy – to say the least – has gone away (and will officially go away once the new paper is published) and there's no credible experiment at this moment that would indicate a neutrino's heresy against Einstein's commandments. The only question is how accurately OPERA will manage to measure the speed of light in their corrected paper but I am not too interested in that given the fact that they're able to produce a 60-nanosecond error, anyway.

OPERA – whose real job should be neutrino oscillations and not sensational, wrong claims about relativity – still tries to look very important so we must wait for their new precise results (hopefully more precise than the previous ones). However, there is one guy who can already measure the right speed today and who has actually published a preprint with the right figure. Who's that? 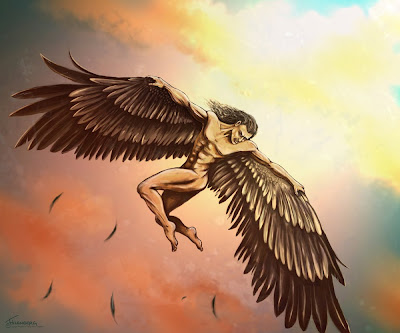 Yes, his name is ICARUS. Nice to meet you. A few thousand years ago, he had a company that later evolved to the Aegean Airlines Greece. But because the Greeks no longer have to work – they have invented a financial perpetual motion machine (a printer of worthless government bonds that some people exchange for the real money) that replaces work and produces lots of money even after you die – ICARUS retired and lives in the cave in Gran Sasso, very close to OPERA. What a coincidence. ;-)

You may ask whether OPERA and ICARUS are friends if they share a cave. But the answer is that your friend is not your neighbor but the guy behind him. And the paper I am going to present is another anecdotal proof of the proverb. Even though ICARUS is emeritus, he (together with his 50+ employees) just published his measurement of the neutrino speed. What did he find?

\] By the beta/weak process above, some neutrinos transmute the argon nuclei to... no, it's not krypton although it rhymes with argon. Instead, it's kalium that is called "potassium" in English for reasons I find incomprehensible (especially because both words sound totally Latin) but they have something to do with potash (why don't you just call it "draslík" just like everyone I know and I have ever communicated with on this element?). The number of neutrinos they can detect is smaller than for OPERA. But they still observed seven neutrinos from the same production center (CERN-SPS) that is used by OPERA and published the resulting speed in


At this moment, you must be growing impatient: why this Lumo keeps on babbling? Can't he just tell me the result? And you're right. The result is \[

\] Within the error margin which is almost exactly the same as OPERA's error margin, around 10 nanoseconds in total (in the Pythagorean way: but unlike OPERA, ICARUS says that most of the error is systematic), they get an exact agreement with relativity. The discrepancy is so small relatively to the error that I won't even study in which way it goes (subluminal vs superluminal). The neutrinos propagate by the speed of light in the vacuum up to the (relative) accuracy of a few parts per million. Let me just mention that due to their finite rest mass, the neutrinos don't quite move by the speed of light but the difference is of order \(c-v\sim 10^{-20}c\) which isn't measurable for any beams going from one place of the globe to another. If you don't know how I got this small number, note that the rest mass \(m_{\nu0}c^2\lessapprox 0.1\eV\) and the actual energy of these multi-GeV neutrinos is \(E\gtrapprox 10^9\eV\) so \[

\] ICARUS has previously falsified OPERA's claims in November 2011, by an indirect method. They showed the absence of some crazy Cherenkov-like radiation that would have to be produced by hypothetical superluminal neutrinos, as pointed out by Cohen and Glashow. If you accept the Cohen-Glashow assumptions, they showed that the speed discrepancy had to be at least 1,000 times smaller than claimed by OPERA.

I personally think that further experiments on this topic are a waste of time and money. We've had a potentially exciting effect for a few months (and many physicists got infected by the laymen's media emotions connected with the chance to humiliate Albert Einstein) but it has evaporated and it will never return again, OK? So let's move on. Real discoveries may be waiting for us.

By the way, the Physics arXiv blog discusses a preprint about the first successful transfer of a digital message using neutrinos, something that could be useful for the submarines.


LHC: back to work