In November 2011, we were informed about a result of the LHCb experiment, an experiment using a smaller detector at the LHC that focuses on aspects of particle physics associated with the bottom quark i.e. the second-heaviest quark flavor.

Four months ago, the result was telling us that they had seen some evidence of beyond-the-Standard-Model physics, manifested as an apparent new source of CP-violation in the decays od the D mesons. 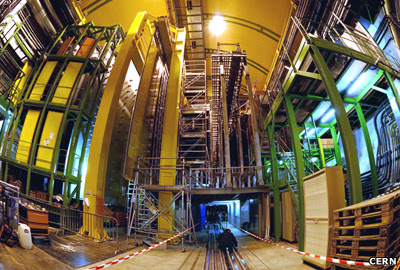 There is an ongoing conference "Recontres de Moriond" in the Italian Alps. The most important message from Monday talks was summarized in this CERN press release:

They measured the composition of the decays of the B_s meson, a meson composed of the bottom quark and a strange antiquark or vice versa (aside from an ocean of gluons and quark-antiquark pairs). The Standard Model predicts that 3 decays out of 1 billion end up as two muons (of opposite signs). The LHCb folks have measured and learned that the actual percentage doesn't exceed 4.5 decays out of 1 billion, i.e. it's not more than 50 percent higher than the Standard Model prediction.


This observation brings falsification or modesty (=typically a shift towards higher masses of new particles) to some models of new physics but not others.

Given the fact that the LHCb has also published positive evidence in favor of new physics and because I think that the results that contradict the Standard Model tend to be delayed, I don't think that a single new result indicating that the Standard Model is approximately fine brings us a representative summary or a universal answer to the general question "new physics Yes or No". This result has been cherry-picked; it only shows what it shows and as an argument, it doesn't have a sufficient power to convincingly argue that there's no new physics to be seen at the LHC. Somewhat sloppily, we may say that the LHCb favors new sources of CP violation but disfavors new flavor-changing processes.

La Thuile, an OK place for skiing and the place where the conference takes place

The conference has already discussed neutrino topics including OPERA as well as dark matter matters. You may try to go through the documents to see whether something new has been reported.

On Wednesday, the conference will focus on the Higgs physics. The Tevatron may tell us as much about the God particle as it can tomorrow. On Thursday, we should learn about new experimental results or non-results on SUSY. No rumors indicating any interesting results seem to be widespread which doesn't really imply that nothing interesting will be reported.

I would still bet that nothing too interesting will be reported and if there are some new stunning results, as some rumors indicate, we will probably have to wait through the Summer conferences. But those guesses may easily be wrong.

Off-topic: In this talk about a nuclear duck, $100 billion medical isotope research project in a poor country, and a topic that no one talked about recently, namely Iran, Bibi shows that he is a very good entertainer, too.
Luboš Motl v 10:18 AM
Share