Glaciation cycles – swings of temperature that change the global mean temperature from a maximum to a minimum that differ almost by 10 °C and back – occur in quasiperiodic cycles with periodicities between 20,000 and 100,000 years or so. They may be reconstructed from the concentration of oxygen-18 in the Antarctic ice core. 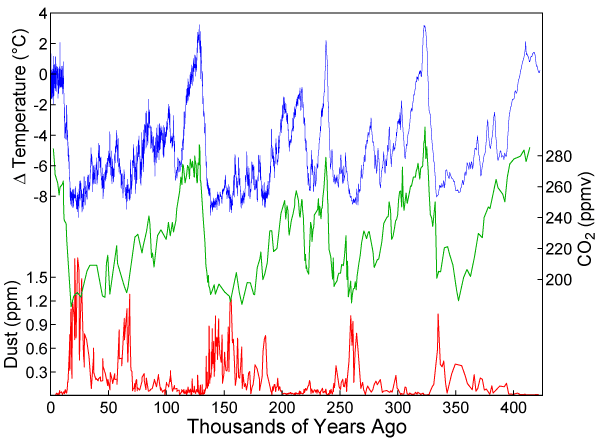 The time goes to the left on the graph above. Note that the cooling is usually slower and the warming appears more abruptly. Concentrations of gases such as carbon dioxide and methane in the atmosphere are nicely correlated with the temperature. The reason is that warmer oceans can't keep gases inside so well, so they release them after a few centuries when the ocean temperature adjusts to the land temperature.

The graph above also shows that the concentration of dust tends to be high when the Earth is warming.

The previous "warm moment" occurred about 110,000 years ago. Then it was suddenly getting cooler and the maximum glaciation was reached around 18,000 years ago. At that moment, it started to warm up and the ice mostly melted. Note that the sea level increased by more than 100 meters since that time; however, the change almost completely stopped about 6,000 years ago. The last glaciation is usually defined as the era between 110,000 and 10,000 years ago.

Almost 100 years ago, Serbian geophysicist Milutin Milanković had a lucky hunch. He conjectured that all these swings are due to astronomic cycles, namely precession and axial tilt (the latter is also known as obliquity). The Earth's axis wasn't always tilted by 23.5 degrees; it wasn't always pointing in the direction of the North Star, either. These changes take tens of thousands of years and affect the climate because they affect the amount of solar radiation that reaches important places of the globe.

These astronomical cycles are the main examples of the Milanković cycles. Milutin published and sold his work via amazon.com.ah (Austria-Hungary) via pigeons and you may still buy it.


It was a nice sketch of a theory but the detailed, satisfactory description of the ice core only became possible in the recent decades.

Gerard Roe, an ex-student of Richard Lindzen, 30 years after some visions by Nigel Calder published in Nature, realized a serious technical mistake many people before him were making. They were comparing insolation (amount of incoming solar energy) near the Arctic Circle with the temperature. Instead, one should be comparing insolation with the time-derivative of the ice volume – simply because ice doesn't disappear immediately when solar radiation appears; the solar radiation only gradually melts ice. And because the ice volume is related to temperature (without derivatives), the insolation near the Arctic Circle (the region of the globe with the greatest potential to create or destroy volatile ice sheets) may be compared with the derivative of the temperature. Roe's 2006 reconstruction was impressive; click at his name in this paragraph to see the charts.

If we want to predict or reconstruct the temperature itself, we would naively have to "integrate" this insolation. However, the ice volume only moves in a certain interval and near the end points, the behavior changes, e.g. during deglaciation (which is typically faster than the thickening of ice, as the graph at the top reminded us). One needs to know when these events occur. Peter Huybers of Harvard noticed that deglaciation occurs when precession is "high" (whatever it means) and when the axial tilt is large but some cycles are skipped.

I always wanted to know how the same theory predicts the future of the glaciation cycles. Various things made it difficult. However, iya from the "most-likely blog" finally made something that looks convincing and cool. And it is waiting for your critical eyes or excited eyes once you successfully reproduce the results. Just to be sure, I haven't verified it at the technical level; so far, it has only passed the same LM tests of plausibility as the flying Dutchman ;-). See his or her

There are lots of graphs relevant for the cycles as well as a nice Excel file with the relevant data you may want to download. Assuming that the past retrodiction was done by the same algorithm, I trust both because iya's reconstruction looks similar to what we have known. At any rate, you are surely curious about the future ice ages. The money chart – using a couple of models – is here: 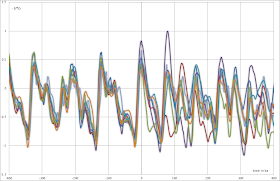 The future starts in the middle of the picture and continues to the right, for the next 400,000 years. We are in the middle which happens to be close to a (warm) peak of the temperature in the Milanković cycles. You see that the pasta is a bit chaotic but there's a consensus between iya's models near the point 60,000 AD. (Of course, such a consensus may only say something about the limited variability or creativity combined with some redundancy of the models, not their validity, but you see that the models differ later, anyway.) All the models agree that the temperature will bottom out at that moment. The ice age should be comparable to the maximum glaciation around 18,000 years ago. It may be very cold, maybe 8 °C colder than today (in average).

Some models (such as the green curve) indicate an intermediate glaciation about 20,000-30,000 years from now. The future after the year 60,000 AD is uncertain but it's unlikely that the evolution of the temperatures will differ "qualitatively" from what we have seen in the recent hundreds of thousands of years.

A bigger point is that while some environmentalists and others suffer from a megalomania and think that our modest acts influence the Earth forever, it ain't the case. In 800 years after we run out of fossil fuels (which may easily be 100-200 years from now), the oceans will have swallowed almost all of the excessive CO2, anyway. The greenhouse effect caused by this CO2, whatever its magnitude is, will disappear as well. Even if it didn't happen in 100 or 800 years, it will surely happen in 2,000 years or 3,000 years.

After the year 5000 AD, the Earth is guaranteed to return to its rather natural cycles unless, of course, the humans will have modified the Earth in some more striking, currently unpredictable, way. Assume we won't do so. So the Earth will cool by those 8 °C again during the subsequent 55,000 years or so, because of almost purely astronomical reasons.

It's clear that the CO2 won't bring us to any "really unpleasant" temperatures in 10 or 20 years; iya's playful neural network model predicts mostly cooling in the next decades, for example. And we have seen that the relatively large natural swings will take over at the time scale of tens of thousands of years again. So the hypothetical climate threat is confined to a rather obscure intermediate time scale. For a threat to exist, we will have to multiply our consumption of CO2 at least by a factor of ten, find lots of new sources of carbon fuels, and run this business-as-usual for a few centuries so that the CO2 concentration increases at least to 3000 ppm or so. If we manage to do so, we may substantially increase the temperature for a few centuries, probably not in a detrimental way but in a way that will be comparable to the glaciation cycles. But if we fail to do so, we will never beat the natural climate cycles such as the Milanković cycles and we should avoid arrogant statements about Mother Nature's having become an irrelevant and weak grandmother.

Meanwhile, if you're thinking whether you should buy a new, more energy-efficient fridge, don't forget that in the year 60000 AD (13,700,060,000 years after the Big Bang, assuming that Jesus was born on a nice Big Bang date), we will already be deeply in an ice age. ;-)