For example, Airbus and six European airlines have informed Ms Connie Hedegaard, the European Climate Holy War Czar, about a very surprising finding: the carbon trade war against foreign airlines will lead to lost contracts and jobs. What a surprise. 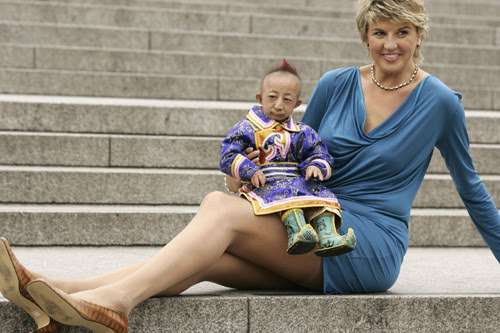 Prof S. Matthew Liao of New York University teamed up with colleagues at Oxford University, Anders Sandberg and Rebecca Roache, and they designed a superior solution to the climate change problem:


The basic observation is that geoengineering is too dangerous and blasphemous because "geo" in this word actually means "Gaia" who is holy. So in the article – to be published in Ethics, Policy, and the Environment as a "target article" – these authors suggest a much more ethical and safer solution, namely to mess up with the humans and their DNA. They will produce humans who are better to fight climate change. What is their recipe?


Their project has many components that are described in the 29-page PDF file above.

The first step (among those described in Section II) will be to induce "pharmacological meat intolerance" which will work in a similar way as milk intolerance. People will be fed some drugs so if they dare to eat meat, e.g. a piece of a hamburger, they will die rapidly. According to the authors, this safe and ethical cure will immediately offer the final solution to the agriculture problem. Animals (that produce CO2) won't be needed anymore and these big enemies of the contemporary environmentalists may finally be made extinct.

The authors are confident that people will be thrilled to become meat intolerant. Isn't it great to die once you eat meat?

The second procedure will be the production of shorter humans. The humans that are too tall – like e.g. the average currently living people – will be aborted. By various selection, the mankind will be optimized and composed of individuals who are 15 centimeters shorter. In that way, S. Matthew Liao eventually plans to become the tallest person in the world. The CO2 emissions of these humans will drop accordingly; unless we will face a population explosion of these dwarfs, of course.

If the human engineers forget some tall (ordinary) children, they don't have to be aborted after the birth. S. Matthew Liao et al. consider themselves very ethical so instead of aborting kids or adults, they will pump special hormones such as somatostatin into these excessively tall people (above 150 cm). The detailed chemistry may be found in the literature.

One more step to reduce the height of adults is to reduce the the birth weight because there's a known correlation. (The authors don't need to distinguish correlation and causation because their goal is grander than some details of this sort.) So if mothers are forced to starve, they will produce shorter adults and everyone will be happy, Prof. S. Matthew et al. tell us.

Also, Britain should introduce the Chinese policy of one-kid-per-family.

The third class of policies involves drugs to improve altruism and empathy. People will be fed chemicals that will make them more left-wing and morally superior. These millions of improved humans who will live in the world will be excited about the policies to make mothers starve and to abort all people above 135 cm – there's already been some progress in the reduction of the height and the reduction of the world population.

(After a couple of generations, humans will start to resemble microchips and obey Moore's law which will be adopted by the U.S. Congress and the U.K. Parliament for all U.S. and U.K. citizens. 85,870 climate change analysts in the United States with average salary $61,700 will be exempt from some of these policies because they're saving the world.)

Also, environmental problems are exacerbated – or even result from – a lack of appreciation of the value of other life forms, the authors observe. They propose many policies to fight against this attitude that is so irritating for the environment. For example, everyone who says "f*cking mosquitoes" will be subject to death penalty, including his or her family and pets. In that way, everyone will become very respectful towards other life forms.

At the remaining tens of pages of the article, the authors explain that these policies are truly needed and they're completely safe. I hope that they will start the testing of their "ingenious biotechnologies" on themselves; they badly need it. People like S. Matthew Liao should live inside graves at the cemeteries only so that their articles and similar greenhouse gas farts are safely sequestered and the civilization is protected.

Yes, I am totally disgusted by this stuff and by the fact that NYU and Oxford harbor scumbags who are capable of writing this junk. It only differs from the most perverse medical plans during the Nazi era by one detail: the Nazis at least wanted to create a race that had some qualities according to some rather sane criteria (well, in some cases, at least). Instead, Mr Liao and his thugs want to exterminate the mankind as we know it and create a sea of short stinky junk losers similar to themselves. And that idea really sucks.

A few days ago, we talked about some mental diseases linked to climate alarmism. Some people argued that OCD was a "harmful disease" for others. But Mr Liao is clearly sick as well and his disease is extremely dangerous for the people around him. Why were such people allowed to enter Oxford and NYU? They should be kept in Guantanamo.