A protest: President Klaus may return the Konrad Adenauer Prize

The Konrad Adenauer Prize – linked to the CDU – has been given to various scientists, journalists, and politicians. Czech president Václav Klaus – then our prime minister – received his copy in 1993. However, he may erase himself from the list of recipients of the local version of the award to protest against something rather incredible. 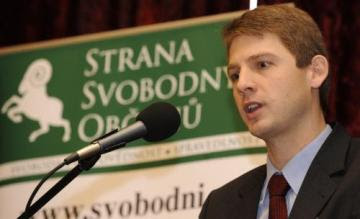 The story involves Mr Petr Mach, the chairman of a Czech libertarian party, the Free Citizens Party (SSO), whom I know in person. Here is the translation of Klaus' protest letter to the director of the Konrad Adenauer Foundation which was posted on klaus.cz:


President's letter to the director of the Czech branch of the Konrad Adenauer Foundation, Mr Hubert Gehring

I was shocked by the news agency's report that the Konrad Adenauer Stiftung, the main sponsor of the conference at the Center for European Studies at the University of Economics in Prague, dedicated to the issue of the Fiscal Union And The Future Direction Of The EU In The Context Of The Debt Crisis, which is scheduled for March 7th, 2012, informed the organizers about its intent to cancel its planned financial support in the case that the conference organizers won't disinvite the chairman of the Free Citizens Party Mr Petr Mach.

I am still trying to believe that the report is a mistake or erroneous information. It seems unimaginable to admit that it could be possible for your foundation to restrict the discussion about this serious topic in this brutal manner – especially on the academic soil. When I studied your web page, it said that the purpose of the Konrad Adenauer Stiftung it to search for and support a societal political dialogue.

The Free Citizens Party is a legitimate Czech political party and its chairman, Mr Petr Mach, is a distinctive personality not only in the context of our political scene but also when it comes to scholarly work in economics. For several years, he's been directing the Center for Economics and Politics (CEP), a think tank I founded (which was collaborating with your foundation at that time). He's been teaching at the University of Economics for years and now he's teaching at the University of Economy and Management.

But even if we were talking about another participant, I can't imagine at all that this kind of political pressure – bordering with the blackmailing – could become a hallmark of your distinguished organization. It would really mean that we are already living in a totally different world than the world I have been trying and helping to shape for two decades in which I was active in Czech as well as European politics. If this were the case, I would have to think about the possibility to return the Konrad Adenauer Prize that I received in December 1993.

I believe that you will understand why I was so shocked by this news report. With quite some interest, I will be waiting for your response.

The Foundation has published a PDF file claiming that it is a misunderstanding and no such news report is known to the foundation. Instead, what happened according to the foundation is that they have a full control over the participants and they have "just" disinvited Petr Mach and others who were previously invited to speak once they had a sufficient number of other speakers.

Their suggestion that the foundation is officially responsible for the program and selection of speakers seems to be untrue: the program committee as well as the organizing committee are mostly composed of Czech scholars.
Luboš Motl v 6:11 PM
Share