A few days ago, the media were obsessed by a paper by Dim Coumou and Stefan Rahmstorf trying to hype hypothetical links between the increasing global mean temperature in recent decades and the increasing dominance of record hot temperatures relatively to record cold temperatures.


A decade of weather extremes (Nature Climate Change, fresh)
Increase of extreme events in a warming world (PNAS, half a year ago, plus a correction)


Now, the papers contain lots of emotional misinterpretations and some valid but inconsequential observations, too. I will discuss both.


Both Coumou and Rahmstorf wrote a popular summary of their papers at RealClimate.ORG, 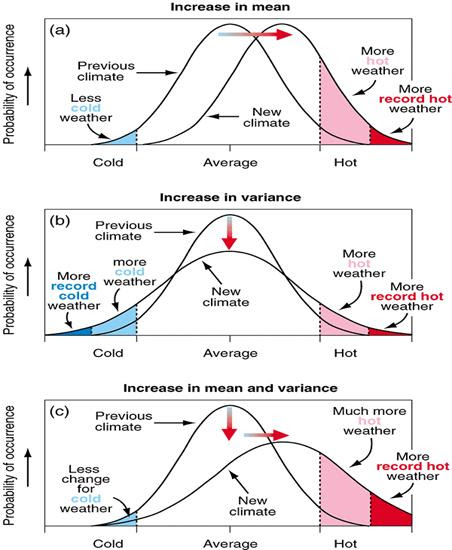 \] Note that the Gaussian decrease for a large \((T-T_{\rm normal})\) is faster than an exponential decrease: it's the exponential of the squared argument. So when we consider record events near the "tail" i.e. for extreme values of the temperature anomaly, their frequency brutally depends both on the additive shift of \(T_\text{normal}\) as well as on the magnitude of the standard deviation \(\Delta T\).

The changing mean is what has been called "global warming". There's no evidence whatsoever – neither observational evidence nor a theoretical derivation - that the standard deviation has been changing in recent decades or centuries although some people love to talk as if there existed such evidence. The greenhouse effect is at most able to mildly change the mean temperature. And if there's some expectation for a trend in the variations, i.e. for an evolving \(\Delta T\), these values should decrease as the poles warm up faster and the polar-equatorial temperature difference, a main driver of storminess and variability, shrinks, as Richard Lindzen often points out.

The maths describing this huge sensitivity is actually totally identical to the maths describing another topic that's been repeatedly discussed on this blog, the gender gap in mathematics (and related fields). La Griffe du Lion wrote an analysis that uses the same maths of the normal distribution to predict the proportion of women at various levels of maths achievements. In particular, a female Fields Medal winner should appear once in 103 years or so. All his or her numbers (and the probability is over 95% that the author of such an analysis is male) agree with the observed percentages of women rather accurately. We're still waiting for the first female Fields Medalist but the difference between 0 and 1 is obviously noise.

Let us compare these ratios with the ratios of record-hot and record-cold temperatures set at various places because this is where you may see the stunning hypocrisy of the leftwingers.

La Griffe du Lion calculated that the theoretically calculable percentage of women among the Fields Medalists is about 1.3 percent; the men-to-women ratio is about 75-to-1. The large magnitude of this ratio is "mostly" due to the higher male standard deviation (1.1 times higher than the female one), not so much due to the difference in the mean values. 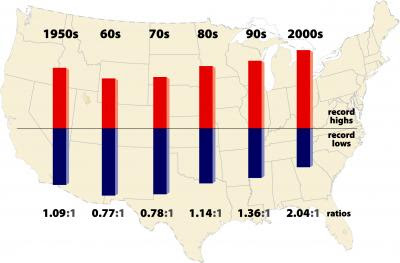 On the other hand, the statistics published at the end of 2009 – click the picture for some Phys Org details – revealed that the ratio of the "hot records" and "cold records" set between 2000 and 2009 in the U.S. was 2-to-1. It's not too remarkable; and it's still plausible that noise or natural factors are the reason for the asymmetry. This asymmetry of course shows no human fingerprint whatsoever; the cause of all these effects is as debatable as any other "sign of global warming".

The 2-to-1 temperature record ratio is so modest because the variance isn't changing and has no reason to be changing. So the asymmetry between the record high and record low temperatures is only due to the changing "mean value" of the temperature distributions and because the global mean temperature has changed by much less than 1 standard deviation in the local temperature (weather), we get an unremarkable ratio (in comparison with the gender gap ratios).

But you may notice the difference between 2-to-1 and 75-to-1. The latter is clearly more substantial; it's still politically incorrect among many leftwingers to mention that this asymmetry exists for biological reasons and is almost certainly here with us to stay. On the other hand, the much more modest asymmetry in the case of the records is something we should talk about every day and use as a justification to reorganize the industrial societies in the whole world.

The double standards are just breathtaking. Needless to say, the only invariant statement one can make about both situations is that leftwingers are willing to damage the industrial capitalist society and they're ready to abuse any grain of scientific truth they find while they're willing to hide any other, possibly much more important, piece of science that isn't convenient for them.

It's because the asymmetry in the record temperatures is just a curiosity; on the other hand, the existence of people with unusually strong mathematical skills was (and probably still is and will be – but who knows what will happen in the future) essential for the scientific and technological progress of the mankind. Chances are that if the Earth hadn't seen people of Newton's magnitude, we couldn't have built the modern civilization.

And if there were only women with their narrower IQ distribution in the world, the probability of an IQ similar to Newton's IQ would drop by many orders of magnitude. It's totally plausible that it would take thousands or even millions of years for people such as Newton to be born. They would be so isolated that these women's skills wouldn't even be appreciated by the environment so their talents would remain unexploited.

The importance of Newton is linked to the fact that there exist some outcomes of their lives that are quickly – roughly exponentially – growing with their IQ or otherwise "measured" abilities. Imagine that we work with the normal distribution,\[

\] where \(C\) is a numerical constant. It's totally plausible that \(C\) is of order one and perhaps a bit larger, e.g. \(C=5\). Great skills may easily create exponentially big breakthroughs with lots of ramifications etc. What is the expectation value of \(\exp(Cx)\) in the normal distribution centered around zero, with the variance equal to one? The result is easily calculated by completing a square:\[

\] In the result, the first factor is the same distribution just shifted by \(C\) to the right. Its integral is the same as it is for the original distribution. These integrals cancel when we calculate the expectation value of \(\exp(Cx)\). On the other hand, the last factor survives. So the expectation value of \(\exp(Cx)\) is simply \(\exp(C^2/4)\). If \(C=5\), for example, the value is \[

\] It's very large and quickly grows huge if we increase \(C\) a little bit more than that. This high value of the expectation value is dominated by contributions near \(x=C\), i.e. by people whose skills are \(C\) standard deviations above the mean. My point is that due to the benefits that may be exponentially growing as a function of the IQ, the existence of the few people in the tails may make a huge impact on the evolution of the world.

On the other hand, there are no "quickly exponentially growing damages" for weather extremes that we may actually get. The reason is that the higher fraction of the record hot temperatures among the record temperatures does boil down to the overall increase of the temperature by less than a degree Celsius during the last century.

Because we perfectly know the parameter from which the asymmetry arises – it's the shift of the mean value by less than a degree, i.e. just a fraction of one standard deviation – we may also say how the world would approximately look like if the mean temperature hadn't risen. It's simple. The hot days would still be there; they would just be 0.8 °C cooler than they were in the reality!

So if a city experiences 40.9 °C temperatures on a hot summer day, it may or may not set a new record. Tenths of degrees sometimes matter. If there were no rise in the overall temperatures during the last century, the temperature on that hot summer day would be 40.1 °C. If this were so, about 1/2 of the record hot days would no longer be record-breaking and the statistically seen symmetry between the record hot and record cold temperatures would get restored.

This may influence some cute asymmetric graphs in the newspapers but does it affect the actual life of humans, ecosystems, plants, animals, and societies? Well, the difference is still a difference between 40.9 °C and 40.1 °C. It's not that high. You really see that the difference doesn't matter. I don't really believe that any of the readers know the hottest temperature they have ever experienced with this accuracy!

There isn't any "singularity" or an "exponentially growing damages" when the temperatures get to 41 °C. Even if we imagine that there are substantial damages coming from a 41 °C heat wave – and I don't think they're substantial (and I think that such damages are still smaller than the problems coming from chilly weather, so warming is beneficial) – the difference between the damages coming from a 40 °C and 41 °C temperatures is very, very small. So while the shift of the mean value by 0.8 °C can make a big impact on newspaper articles and graphs that try to spread the climate panic, rational people know very well that the actual impact of these asymmetries on anything that really matters in our lives is totally negligible.

Nevertheless, it's important to scream very loudly that these changes don't matter and it is utterly irrational to pay a penny – not to mention tens of trillions of dollars – for attempts to "mitigate" such changes. The findings by Rahmstorf and tens of thousands of similar parasites all over the world are not important and these bastards are dishonest fraudulent crooks because they try to pretend otherwise. All of them (including 85,870 climate change analysts in the United States whose average salary is $61,700) belong to Guantanamo.