America is entertaining itself with Rush Limbaugh's reaction to the political discussion about contraception subsidies. All kinds of people are attacking Limbaugh – and he probably enjoys it because he depends on publicity.

However, I find these attacks weird and kind of scary because Limbaugh's basic logic seems bulletproof to me. 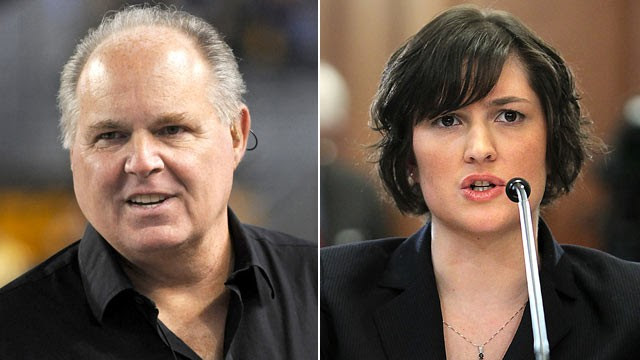 Let me begin with some local background. Czechia is the most atheist country in the world. This gets reflected in many other aspects of life that even American leftists could dislike at the end. For example, every other Czech marriage eventually gets divorced. Similar and related events are completely common and most Czechs are excessively tolerant towards all kinds of activities that would earn a death penalty in one third of the world etc.

Still, contraception pills are not being paid for by the insurance companies, at least not by most of them. And those that have tried this policy usually restricted the contributions to women below 27 years of age so Sandra Fluke who is 30 wouldn't qualify even here.

But let me discuss the issue.


Sandra Fluke, a law student and activist, was invited as a Democratic witness to the U.S. Congress to argue that women should be paid by the employers or insurance companies or the government for their contraception pills etc. She or her friends can't really afford to pay it themselves, we heard. Rush Limbaugh was surprised that she has so much sex that she can't pay for that herself. And how do we call women who want to get paid for having sex, he asked?

Well, we call them sl*ts or prostitutes. We really do. In another show, Limbaugh demanded the sex tapes obtained from the events for which he sponsored the contraception pills because when we pay for something, we expect something in exchange. I think that Ms Fluke, who has previously expressed the desired to be paid for sex, should similarly publicly be flattered by this interest from Mr Limbaugh himself.

We are probably mostly talking about combined oral contraceptive pills. Although some people pretend that every woman is taking these pills today, the actual number is just 100 million women in the world and 12 million women in the U.S. The percentage of women in active age who take it goes from 1% in Japan to 35% in the U.K. Penny of the Big Bang Theory is really hot but at some point, she hadn't have sex for 6 months! So don't assume that every woman in the world has sex every day. This pill reduces the fertility chances of a woman for 1 day, maybe for 1-4 days, and thus reduces the pregnancy risk nearly to zero, so women are routinely taking it every day.

While Rush Limbaugh implicitly suggests that law students who have sex 50 times a day have to pay 50 times more money, it ain't so. But we may still talk about the frequency of sex "every day". How would you classify a woman who has sex every day? Well, a right adjective is "healthy" although "sl*t" may be appropriate for a large subset of these healthy women, too. ;-)

The idea that the "very sexually active law students" should be subsidized in this way sounds as perverse to me as it sounds to Rush Limbaugh. We're living in a "modern society" in which sex has been largely decoupled from reproduction and various old-fashioned religious taboos. At least most of the sex has been decoupled. As I mentioned, it's surely not true that this decoupling has been a "purely good news". Still, we call these organs "reproductive organs" for a good reason. If a pill makes them unable to perform this reproductive function, it is not a pill that brings health to these organs; it is a pill that makes them partly dysfunctional so you shouldn't call it a pill to achieve health. Viagra could be classified as a pill that brings health to a man because it is meant to fight against a dysfunction but "the Pill" doesn't fit into this category. Thank God, at least Bill O'Reilly understands this difference.

Fine. Even if you forget all the traditional and religious commandments about sex and its natural link to reproduction and if you cynically view sex as fun, much like watching TV or eating chocolate, the subsidies for contraception pills still look indefensible. In effect, it's a financial transfer from the people – and women – who don't have or don't expect sex every day to those who do. Why should such a financial answer occur? Should we also pay other women for their chocolates or movies in movie theaters?

You're a woman who is really needy because she loves to eat 2 pounds of Belgian chocolate a day, so I must really pay you hundreds of dollars per month to help you with your hard life. ;-) What kind of logic is this?

It makes absolutely no sense, either. If you consider sex to be just some extra fun that shouldn't be connected with any other expectations or responsibilities, then you should pay for this extra fun yourself. Or you can make the guy pay for it if you don't mind that this could partly restore your sl*t status. ;-) Can't you get the money from the guy (or guys) in a more indirect way?

Another point is that the price of the pills goes from $9 to $84 a month, at least in Chicago, so it's a minor expense, especially if you stay near the low endpoint of the interval. If you want fancy or very safe pills or whatever, well, you must pay some extra money. I can't imagine any justification for subsidies here.

The spectrum of people who have attacked Limbaugh is so wide that I no longer think that the U.S. may be faithfully described as a free or Christian country. It's a country de facto controlled by feminists and their speech codes. I think that e.g. the people at Harvard who agree with Limbaugh – and most decent people should – must shut their mouth at this point because the harassment of such people by the left-wing media and those who serve them in the contemporary U.S. has become intense and constant.