Perhaps I should call them "beautiful events" because they involve the beauty quark and not just ordinary strange quarks. ;-)

On Friday, Antoine Marzin of Oklahoma gave a Moriond talk about the ATLAS search for the third-generation superpartners. At the end, we didn't learn anything that would go beyond the February 14th talk which was itself primarily a review of previously released preprints.

The direct stop production doesn't seem to be discussed at all and that's what the stop squark rumors may be all about. We may learn something new on another conference next week, the Search Workshop in Maryland where Stephanie Majewski speaks next Saturday (she coordinates the stop efforts in the ATLAS' SUSY group, together with Monica D'Onofrio: the four-tops events seem to be very female, indeed). See the list of ATLAS talks in the near future. However, I was still intrigued by some Marzin's graphs that have been shown before. For example, in the gluino-mediated sbottom analysis, the following graph is relevant: 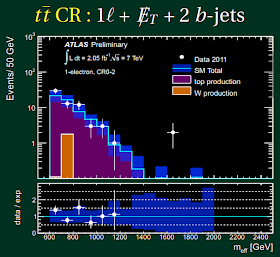 Can you find a strange cross on the picture? Well, I can: look at the center of the picture. If you check the axes, you will see that the cross describes 2 events in a bin around \(1,650\GeV\). Are two events too many? Well, it depends...


To answer this question, you must look at the theoretical prediction. It's shown as the blue curve on my recolored version of the graph. There are some strange blue teeth near \(1,500\GeV\) and \(1,900\GeV\) but they're so strange that I believe they're just some artifacts of Monte Carlo calculations. If you extrapolate the decreasing blue curve in the left part of the picture, you may conclude that the prediction for the \(1,650\GeV\) bin is just 0.01 events or so. Instead, they got 2! Yes, that's two factorial which is, happily enough, equal to two.

The probability that you get two events like that is about \(0.01^2=0.0001\) if my numbers are right. Well, it's actually close to one-half of this small number. It's unlikely to see too many events like that. Let me say in advance that if they get an event like that for each inverse femtobarn of data – the graph above uses 2/fb – they may already have 5 events of this kind. The probability of such a thing would be close to 0.0000000001, i.e. really tiny.

To make things even more puzzling, there is another graph in Marzin's talk: 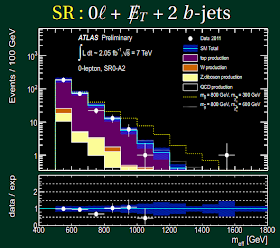 It has one similarly surprising event near \(1,550\GeV\). Both graphs show events with two bottom-quark jets, missing energy, and something else. The first graph requires 1 additional lepton; the second graph requires 0 leptons. That's the only difference between them.

I should finally say what the \(x\)-axis actually is. Well, it's the effective mass given by \[

\] One is summing the missing transverse energy and the transverse momentum of all jets and leptons. That's what the effective mass always means.

You may see that this quantity isn't terribly Lorentz-invariant. That's why you never expect completely sharp peaks as a function of this effective mass. For pair-production of superpartners, you don't expect sharp peaks for its own related reasons, either. Because the superpartners are probably heavier than all the normal R-parity-even particles from which the pair may be born, this normal R-parity-even particle has to be virtual. So there's no reason why the total energy of the superpartners in the pair should be any sharp number.

I consider supersymmetry extremely beautiful and persuasive at the theoretical level. Experimenters often say that it will ultimately lead to fireworks of discoveries when the time arrives. But I admit that I am not too excited by the modified gradual curves. New physics that could produce new sharp peaks in some graphs would be so much prettier! Don't you agree?

We have all the reasons to think that there shouldn't be any sharp peak in these graphs so these three events are coincidental and they will fade away as more collisions are recorded and evaluated. But maybe they won't. If that's so, there could be some particle whose mass is related to those \(1,600\GeV\). I don't know what it could be.

One should admit that there seems to be some excess – in this case more uniformly distributed – in the events with a single high-energy bottom jet, too. 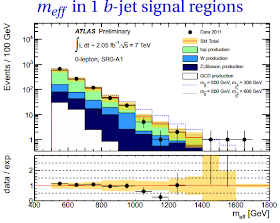 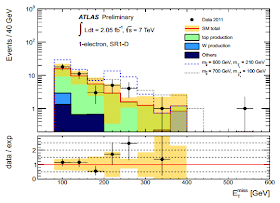 I have mentioned that the direct stop pair production seems to be "completely" absent in these analyses so that's where we might expect some stunning surprises in the future. However, it's also plausible that the strange events discussed above have grown once the dataset was (more than) doubled and they're suggesting some new physics interacting with the third-generation quarks...
Luboš Motl v 5:30 PM
Share