Today, Wednesday, is dedicated to the Higgs boson news at Moriond, a particle physics conference in the Italian Alps.

The Wilson-Higgs Hall, a photoshopped cousin of the Fermilab's Wilson Hall.

A few minutes ago, the media exploded (see Reuters, BBC, NYT, Nature, and tons of others) with reports that the now-defunct Tevatron collider has seen a confirmation of the LHC's Higgs boson (or, in Canadian English, bosun) near 125 GeV. The information may be seen in a Fermilab press release, too. See also the bonus Fermilab images.

Detailed conference papers from March 7th include some changes to the ATLAS Higgs analyses, too. The combined local significance of the diphoton and four-lepton channel of ATLAS stands at 3.4 sigma at this point. Some people "add" the information that a signal is not yet seen in the WW (2-lepton 2-neutrino), tau-pair, and bottom-pair channels to conclude that the "overall ATLAS data significance is just 2.5 sigma" (page 23/24). I think it's silly. Unless the other channels show at least 2-sigma deficits, they can't really reduce the overall significance much. It's still sensible to add the signals in the Pythagorean way so just like in the Chinese restaurants in TBBT, no reductions. ;-)

TRF has considered a 125 GeV Higgs boson to be a sure thing since December 14th so the new American results aren't game-changing for me but they could be important for the opinion of others. The weakness of the Tevatron finding is partly compensated by the fact that it's really independent from the LHC, using proton-antiproton collisions at a lower energy.


The dominant channel at the Tevatron that sees a signal involves a decay of the Higgs to the bottom-antibottom quark pair. However, because of this dominant final state, the mass resolution is much lower at the Tevatron (bottom and other quarks produce "jets" which are much more fuzzily defined than photons in the diphoton channel or 4 leptons in the golden ZZ channel) so the Yankees may only say that the statistically significant signal – 2.2 sigma is above 2 sigma but way below 5 sigma – is pointing to the existence of a God particle whose mass is between 115 and 135 GeV, almost the same range as one that the Tevatron favored since the last July by high-precision measurements of some masses.

The combined D0 and CDF plot. Via Science Now. No one seems to discuss the other annoying 2.2-sigma excess near 200 GeV but let's assume it's noise.

Of course, that's perfectly consistent with the LHC's result that indicate the mass about 125 GeV, exactly in the middle of the Tevatron's wide interval. If you combined the evidence from the 4 detectors in some heuristic way, you would conclude that the total significance of the 125 GeV positive Higgs evidence has surpassed 5 sigma because D0+CDF combined are about as strong witnesses as CMS or ATLAS separately, thus boosting the 4.5-sigma LHC evidence above 5 sigma. Due to the poor resolution, I would still say that D0+CDF combined are telling us less than either ATLAS or CMS separately. 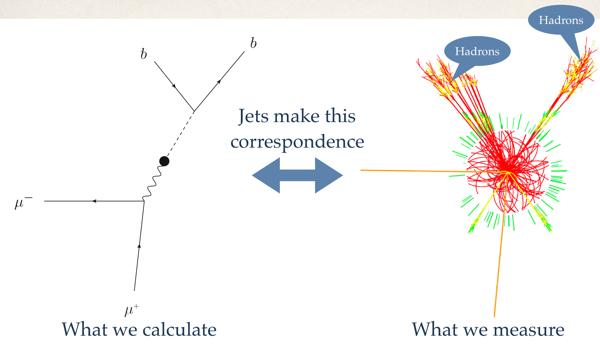 The Tevatron sees the Higgs mainly when the God particle decays to a bottom quark-antiquark pair. Quarks or antiquarks can't be isolated – Nature confines colorful guys in prisons and, like communism, prefers colorless grey hadrons – so each of these quarks creates a whole shower of hadrons (strongly interacting particles similar to protons, neutrons, and pions). Experimenters have to combine all the pieces of the shower to determine the energy of the original quark. Because some "soft, low-energy" portions of the shower are hard to attribute to one or another jet, the jet energy is much less accurately determined than the energy of a single photon or a single lepton, the decay products that are essential in the LHC Higgs searches (in the diphoton and 4-lepton channels). The energy resolution is much less sharp at the Tevatron than it is at the LHC.

The LHC represents an amazing progress in experimental physics: a year (and, in fact, a month) of the data from a single CERN detector tells us more than a decade of collisions at both Fermilab detectors. When it comes to physics at higher energies than 125 GeV, the advantage of the LHC over the Tevatron becomes much larger, of order a million for some questions. The Tevatron just couldn't reach the realm of certain questions at all.

According to the sensible traditions of independence of experiments and their responsibility for their own results, no single experimental team may do such a synthesis but physics blogs and particle phenomenologists are allowed to do such things by the first amendment so we may see that the overall global evidence in favor of a Higgs particle like this one can be called a discovery. To appreciate the Tevatron's contributions, the LHC folks who expect an experimental Nobel prize for the Higgs boson (this year or next year, unfortunately for some mostly political talking heads in the experiments) generously plan to include a footnote mentioning the Tevatron in one of their future papers. Congratulations to the Fermilab for the footnote.

I kindly ask John Ramsden to start to think about the ways how to send me $500 in a Higgs bet he is going to officially lose pretty soon. For example, he may create a PayPal account now if he doesn't have one. ;-) If you think that John doesn't deserve to pay himself – many other people have been staunch Higgs naysayers as well – you may send me an amount of money of the form USD $**.25 and I will subtract your donation from John's debt as long as the remainder is still non-negative. In other words, donations equal to an integer plus 25 cents are effectively donations to John Ramsden.

Tomorrow, Thursday, will be dedicated to the searches for supersymmetry at Moriond. See a preview of some multilepton excesses we may hear about. And there's a small but nonzero chance that we could learn about something even more fascinating.

Off-topic: some people expect iPad 3 which will be revealed today to address three more senses besides vision and hearing: see live blog from the presentation.

The touchscreen will feel "rough" if it is told to feel rough. And the gadget will produce smells, too. Several "farting apps" have already been updated to use the new technology and a few shooting games with chemical weapons of mass destruction will actually make you suffocate in the newest version. You may also lick the Apple USB port and taste the flavor determined by the app. iPad 4 is expected to address the sixth sense, too.

It's already known that iPad 3 will have a 2048 x 1536 pixel retina display, the largest resolution for a mobile device ever. A5X doubles the performance again and it has a quad-core graphics chip in it.
Luboš Motl v 10:09 AM
Share