Who should be celebrated for the God particle?

Jester has ignited intense discussions about the proper name of what is usually called the "Higgs boson":

Jester essentially criticizes the participants of the recent Moriond conference for using the term "BEH boson" because it sounds like singing sheep and because Peter Higgs was, according to Jester, the only physicist who really predicted the actual particle. 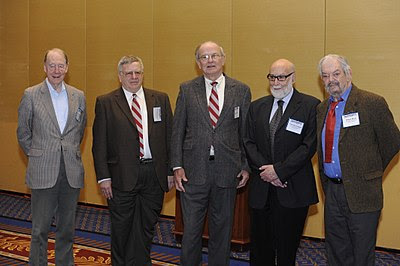 You know, I use the term "Higgs boson" for the God particle as well and it's unlikely that I will learn not to use this common term although, I must admit, I have internalized the term God particle much more intimately than years ago. ;-) This is undoubtedly the case for most of the contemporary particle physicists, too. And I have nothing against Peter Higgs; I met him in Santa Barbara, a charismatic guy.

Still, people will face the question who should get the Nobel prize. Sometime by the summer 2012, the discovery of the 125 GeV Higgs will be officially confirmed and the Scandinavian committee may already take this fact into account when they will be choosing their 2012 physics Nobel prize. Maybe there will be a delay.

They may give the Nobel prize to experimenters – which would probably mean, due to the huge LHC collaborations, a "political" physics Nobel prize, something that I don't really like – but unless they only want to give one-half of the prize for such a big thing to experimenters and one-half to theorists, there will have to be a full theoretical Nobel prize, too.

Peter Higgs has pretty much secured his place among the winners although some people may say that his catchy name is a part of the reason. But should he be the only theorist who gets the award?


Jester seems to be among those who say Yes. I am not a fundamentalist of any type when it comes to this question but I tend to agree with those who say No. And be sure that such people cover a vast percentage of the top particle phenomenologists today. I won't name any names because not everyone wants to afford the same freedom of speech.

Many people are offering their opinions, clearly realizing that similar questions will have to be addressed by the Nobel committee soon. For example, at the end of January 2012, John Ellis, Mary Gaillard, and Dimitri Nanopoulos wrote this review of the history of the God particle and God's symmetric sin [that's my politically correct name for the BEH mechanism]:


A historical profile of the Higgs boson

It presents the history and it would start almost exactly where I would.

Well, I would really start with the Landau general theory of second-order phase transitions in thermodynamics. In some sense, it's even closer to the modern Lagrangians involving the God field because Landau's free energy actually includes the usual quartic function of the order parameter \(H\):\[

\] You see that for \(A=0\) and for \(T\lt T_c\), we obtain the usual quartic potential with two minima, a positive and negative value of \(H\). That's why magnets can have a spontaneous magnetization if they're cold enough, and so on. The fundamental laws – the formula for the free energy – may have a symmetry but the actual configurations of the material, including the ground state, may break it. Bar magnets have the North pole on one side even though another side would be equally good.

I think that Lev Landau is the #1 physicist who has ever lived on Earth who should be worshiped for this precious realization. A symmetry of the fundamental equations doesn't mean that we should focus exclusively on solutions to these equations that have the symmetry as well. I find it disengenious to claim that Landau should be "omitted" because he has overlooked this realization; he was really the first one who made us know and most people learned it from him, directly or indirectly.

The actual "Mexican hat" or "champagne bottle" potential is a very important part of God's symmetric sin. And those of us who were educated in the Soviet bloc environment in which the imperialists' biases (be sure that when I heard about these things for the first time, we already had democracy!) were absent realize that Landau is the key person who brought this important potential to the world. That's why many older physicists in the Soviet bloc would refer to the potential as the "Landau buttocks" potential even when we talk about scalar fields in particle physics. Landau was simply essential.

There is an analogy between statistical physics and quantum field theory that is particularly clear in the path integral description of the latter. Reinterpret the energy of the statistical mechanical system as the action of a quantum field theory and the thermal sum over configurations may be reinterpreted as the path integral over all histories. The QFT side of this mathematical analogy also allows time dependence; time is one of the coordinates.

This analogy, I am convinced, was already realized to be helpful around 1960; I can't tell you the exact history of this thing, however. When the Landau theory of phase transitions is translated to the QFT language in this way, one really gets the Lagrangian for the God field almost immediately.

This is not just a theory, a claim that "someone could have tried this thing". Landau and Ginzburg were actually inspired by the theory of the phase transitions and they did create a quantum field theory – a non-relativistic quantum field theory of superconductivity. Bardeen, Cooper and Schrieffer elaborated upon the Landau-Ginzburg theory and described superconductivity in terms of the Sheldon Cooper pairs (of the electrons). This has some analogies with God's symmetric sin in particle physics as well although I don't think that the BCS novelties are excessively helpful to clarify the new issues in God's symmetric sin applied to a relativistic quantum field theory.

Now, in the condensed matter context, Phil Anderson made some important discoveries. He also identified and promoted the Nambu-Goldstone bosons in the plasmon language. Some of these insights directly translate to the relativistic particle physics context; others don't.

So Anderson realized something that needed true particle physicists for clarification if they wanted to use it in their discipline. Yoichiro Nambu and Jeffrey Goldstone realized that the spontaneous symmetry breaking leads to the birth of new massless scalars for each broken symmetry generator, the so-called Nambu-Goldstone bosons. In the God particle case, these bosons are "eaten" by the gauge bosons. The gauge bosons become massive, gain an extra polarization, and the longitudinal polarization contains the degree of freedom from the Nambu-Goldstone boson.

If you hadn't understood those things before, I am sure that my words haven't explained them to you; try to click the link above for some more information.

But these Nambu-Goldstone bosons are important in God's symmetric sin mechanism, too. Just to be sure, Nambu and Anderson have already received their Nobel prizes so in this rich spectrum of candidates, you may perhaps generously forget about them. However, Jeffrey Goldstone hasn't received a Nobel prize yet.

Fine, now these insights are fully merged with Yang-Mills theories and their gauge fields. For obvious reasons, it started with the Abelian gauge fields. Francois Englert and Robert Brout began with the insights on the God mechanism in 1964. They were followed by the first paper by Peter Higgs which was independent. Gerald Guralnik, Carl Hagen, and Tom Kibble added their paper, also independently. In 1966, Peter Higgs wrote another paper in which he focused on the new massive excitation, the God particle itself. Such a particle was implicitly present in the Guralnik, Hagen, Kibble paper but they didn't study it much and they considered its mass to vanish in some approximation. Englert and Brout didn't notice the extra particle.

No doubt, Peter Higgs wrote the first clear paper on the God particle which was causing a spontaneous symmetry breaking mechanism. His 1966 paper describes what we call the Abelian Higgs model today. In the late 1960s, Steven Weinberg used those insights to construct the actual realistic model with a God particle, using other pieces collected by Glashow and Salam. He also gave it a name, the Standard Model. The God sector in the Standard Model is described by a non-Abelian God model. I am sure that Steven Weinberg in particular enjoys his discovery of God's toolkit because his love for God is the first emotion that drives his life. :-))

Steven Weinberg is an extraordinary physicist who could deserve many Nobel prizes but it has become unpopular, so given his 1979 Nobel prize with Glashow and Salam, I will kindly omit him, too. ;-)

The historical paper by Ellis et al. tells you many more details. Some things are complicated. But there are also other considerations that many famous physicists (and others) consider relevant. God's symmetric sin mechanism or God's mechanism for short (just to be sure, that's what most people call the Higgs mechanism but Scholarpedia calls it the Englert-Brout-Higgs-Guralnik-Hagen-Kibble mechanism) isn't the only thing in physics.

One of the reasons why the "Higgs" naming convention was so successful in the case of God's mechanism and the God particle was that these insights couldn't have been confused with other important insights of Peter Higgs, if you understand what my polite formulation means. On the other hand, Francois Englert, Yoichiro Nambu, and others had written many more papers – often cool ones – than eleven. I've read many supergravity and string theory papers by Englert before I learned that he co-discovered the God mechanism. You may say that the Nobel prize should always reward just "one big discovery" and ignore everything else. And I surely see your point if you think that this is how things should be. But perhaps, when things are complicated, looking at the other contributions by the folks could be relevant, too.

I am not too excited about prizes given by too many people but assuming that the God particle will continue to carry the name of Peter Higgs, I actually think that a more inclusive solution in the case of the Nobel prizes would probably be better to undo some of the injustice that the catchy Higgs terminology caused. The God particle will be the most important discovery in particle physics in many, many decades, so I think it would be legitimate to have two theoretical Nobel prizes for this discovery.

Robert Brout died in 2011. But as I mentioned, it's natural to add Jeffrey Goldstone to the mix. Even though I would prefer small sets of winners in many other situations, in this case, I would give 2 Nobel prizes to the following 6 theorists: