The story with the huge author list high energy experiments

What follows is my experience of participating in HEP experiments mainly at CERN from about 1970 until 2001 when I retired. 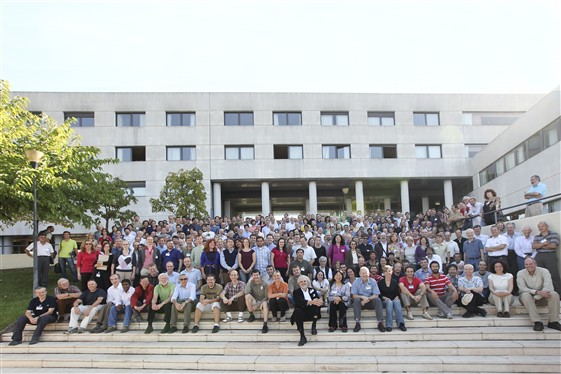 A member of ATLAS and a few of his collaborators attend the October 2009 ATLAS week in Barcelona. Hi-res. The 148th person from the right was added to an author list of a paper.

The first experiments I was involved in were two meter bubble chamber experiments exposed to a K- beam and an antiproton beam. The collaboration was small, four groups and twenty authors. The publications represented the work done in the thesis of the students, and all were involved in discussing the data and conclusions.


The experimental work on our part was in taking eight-hour shifts at the bubble chamber exposure, and at the lab building scanning and measuring machines on which the data was measured recorded and sent to the data bank (DST, data summary tape) of the collaboration for the common analysis. The bubble chamber itself was built and maintained by a special crew and of course the PS delivered the beams faithfully without the experimenters' intervention.

In this exercise the builders of the bubble chamber, the detector, go no credit in the physics publications.

The next experiment was again a bubble chamber experiment at BEBC. Neutrino proton scattering, five groups, one of them CERN, and forty authors. Again the bubble chamber crew did not get an acknowledgment in the publications, and again the work published was mainly thesis discussed extensively in collaboration meetings and agreed before conferences. The experimental work consisted of shifts and scanning and measuring and checking the data sample before submitting the measurements for the common analysis DST.

One notes that the main detector was not the responsibility of the experimenters. Matters changed when one came to the LEP experiments from 1980 on. The experimenters built prototypes to study the behavior of detectors and then the main detectors, with their students and technicians from the labs and from CERN, one of the participating labs. The logistics became if not exponential at least fifteen times worse, because the experiments needed ten years preparation, work from graduate students and physicists. This means that there were students who could not get a thesis with data, but had to get their original contribution from the constructed instrumentation, because ten years is too long for a PhD. The ones who stuck it out and became postdocs had a right to the publications from the data gathered from the instrument they helped build. Twenty four groups and over 300 authors in the papers from the LEP experiment that are still coming out.

So what is the contribution of the researchers in the physics papers. In these large constructions, a researcher had a right to acknowledgment in analysis publications, depending on the decisions of the group to which he/she belonged if he/she had worked on construction, or on data taking, or on computer programming both online and offline. Every member had a right to analyzing the DST and to participate in the physics analysis groups that vetted the papers going for publication and conferences, before being presented to the full collaboration meeting for approval. Not many took the right, although from 300 people of course there were a large number taking a bone and working on it. Many were satisfied with their contribution to the hardware and the software and in reading understanding and commenting on the papers. Some having retired, or gone to other experiments still were/are kept in the permanent author list as an acknowledgment of their contribution to the experiment during their tenure.

Who is doing the original analysis? Students writing a thesis and a few supervisors who are really involved in the physics problems. It is easy as seniority advances to leave the original chase to the younger members and aspire to chairmanship to various absolutely necessary for the experiment, physics subgroups, editorial boards etc. Then there are other decision making bodies that allow seniors to feel useful enough and that their contribution in reading and commenting on papers is sufficient.

Of course it is easy to have free riders in this type of social system, because this is at the discretion of each of the group leaders in one of the twenty four groups: people who have little or no real contribution to the setup or running or analysis and are just really scientific administrators, but it is a small percentage otherwise the detectors would not have worked so beautifully nor the analysis been so right.

Building the CMS was an other order of magnitude in the manpower effort necessary, the inception and prototyping and then building took almost twenty years. The CMS experiment at CERN (URL) has 3,099 authors, and the majority have contributed in conceiving and promoting the design and building the prototypes and the Monte Carlos necessary for the materialization of such a large project. I count 57 groups, small and large. Of these 3,000+ authors a small percentage will really be interested in hands on data analysis. Most are happy to read and comment on the analysis of the few people who sit down and do it.

When the LHC experiments were being discussed we had a meeting at CERN trying to see whether the way the author list acknowledged the work contributed to the experiment could be differently done. It was not possible. The main reason was that all these groups belong in universities and research institutes that have all disciplines, with small groups of two to ten people in experiments and the competition for grants according to publications, as well as for the postdocs seeking positions, would be completely biased against HEP if only the analysis done by the group was acknowledged in the author list. So one needs pages for the author list.

Now a young physicist who has a good idea for analysis can get hold of the data, work on it hard and present it to the appropriate group. Other people will set student thesis on the same analysis with small variations, so that the work is double checked and triple checked, and finally published. The goodness of the researchers then depends on the word of mouth, the respect they have within the group they are working in and the reward of presenting their analysis at conferences.
Luboš Motl v 10:17 AM
Share