Jack Tramiel, a Polish-born Jewish American entrepreneur, died on Sunday at age of 83 (heart failure). His parents were holocaust victims. His mother survived Auschwitz while his father did not. Jacek Trzmiel [Třměl], as he was called, himself worked at a nearby work camp. 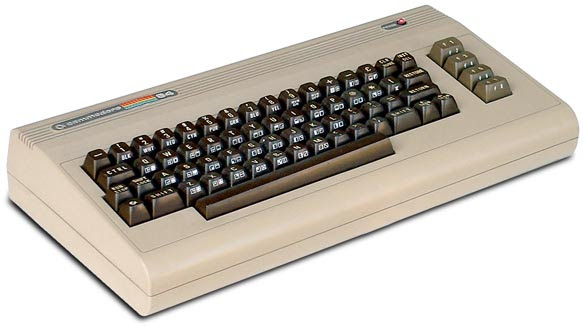 In 1983, when I was nine, the commies didn't allow me to visit my uncle in Bavaria where he had lived since the early 1980s. That was a similar story as with my other uncle who has lived in Melbourne since 1969. But my dad was allowed to see his brother and he smuggled back lots of wonderful things, including Commodore 64 above, the most famous model created by the company. When it broke five years later or so, I got another one – Commodore 64C, the white and skinnier model that was otherwise nearly identical.

Aside from some Czechoslovak computers such as PMD-85 and IQ-151 that were available at various schools and exhibitions, my C64 was pretty much the only "big" computer I could touch before I came to the college in 1992. My high school (female) IT teacher was feeling embarrassed enough when I corrected some of her mistakes during the first computer class so she made a deal with me: I hadn't seen any PC throughout my high school studies.


People in the U.S. may be confused about the degree of penetration of Western technologies to the Soviet bloc. Today, I believe that the West was technologically about 10 years ahead of the East. We would love to say that the gap was greater, the communists loved to say it was much smaller but I think it was close to 10 years. The full computers' delay may look much shorter (3 years) but one must appreciate that the actual components such as the microprocessors were not really natively produced in the Soviet bloc.

But you shouldn't imagine that ordinary people couldn't have owned ordinary Western home computers when they were released. There have actually been lots of them in the socialist Czechoslovakia. The most widespread computer was Sinclair ZX Spectrum, the so-called "gumák" (the rubber one). There have been 100,000 of them in Czechoslovakia just a few years after it was released. Commodore 64 may have been the second most widespread home computer.

I've had lots of fun with it, playing games, creating programs in BASIC and the machine code. (One of fun programs to mention: in 1986 or so, I wrote a machine code program that computed 38,000 digits of pi in a week or so. It was using elementary instructions only to compute the powers and Taylor expansions for arctan but I could only prove Machin's formula behind it a few years later.) If you possessed one in the past and you don't have an emulator, you should surely download one, e.g. WinVICE. It is a perfect emulation of all the details – you may download all the games as well etc. – and you may also allow it to run 50 times faster, among other things. You may also download some Commodore-64-emulating apps (at least the music) for your iPhone or iDevice in the AppStore.

I guess that all ex-owners of Commodore 64 have played Commando at least once. Music by Rob Hubbard has often been similarly excellent but the unusual good SID sound card inside C64 should be thanked, too.

The actual gap between the computers in 1983 and those in 2012 is much more staggering, however. Of course, Commodore 64 had 64 kilobytes of RAM. This is really an overestimate because for various reasons, you could have only used 40 kilobytes for BASIC (which was programmed by Bill Gates, by the way: Gates received $25,000 from Tramiel for his BASIC and no royalties whatsoever, hard first steps towards his $50 billion). Your PC probably has 4 gigabytes or so which is 62,500 or 65,536 times more than the memory in Commodore 64. Instead of 1 Megahertz of the 6510 microprocessor, we have processors with 3+ Gigahertz today, an increase by the factor of 3,000+.


If you quickly need a Flash emulator of Commodore 64, go to this SWF.


In the most demanding graphics mode, the computer would only use 8 kB for graphics. The resolution was low, e.g. 320 x 200, and you couldn't really choose the colors of the pixels independently from all others. Today, we routinely have 1 GB which is 125,000 times more. Similar comments would apply to disk drives. Of course, I only had a tape recorder. In the turbo mode, it needed just 2 minutes to download a 40 kilobyte file. Just imagine how much time we have wasted by waiting for a 40 kB file to load.

There was no Internet we could connect to.

Commodore, Sinclair, and Atari were representatives of "games-oriented" computing and these separate species evolved kind of independently from IBM PC-related computers that we no longer associate with IBM these days at all. One might say that this "focus on games" made them less serious but I believe that those home computers were essential for the looming omnipresence of the PC because they really showed that computers may be everywhere. While their detailed microprocessors and architecture hadn't survived for decades, the idea that a computer is something you should be able to buy and place in your kitchen just like a blender came from these home computers, I think.

Commodore USA, a new company that is alive and kicking, is producing some fun PCs with everything you expect from a PC but shaped into a gadget that looks indistinguishable from the old Commodore 64...