Gordon Kane has pointed out that I have missed a shocking hep-ph paper by Christoph Weniger on Friday 13th, 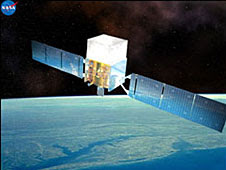 The author from Munich is one non-member of the Fermi collaboration, a rather fresh astroparticle physics PhD. That's weniger (fewer) than the number of authors you would prefer. On the other hand, I consider the Fermi satellite to be the most reliable experiment along with the LHC and the acknowledgements indicate that while this is Christoph's work, his results have apparently been approved by some Fermi members he has talked to. Informal rumors indicate that the members of Fermi do see some line at the same place although the strength seems weaker than the strength in Weniger's pretty clever analysis which chooses target regions with complicated shapes.

Recall that the Fermi satellite has managed to prove that Leslie Winkle and Lee Smolin don't have a clue what they're talking about, aside from many other interesting results that have been discussed on this blog.

About fifty photons coming mostly from the Galactic center seem to be peaked at \(130\GeV\). The local significance is 4.6 sigma which is huge; when the look-elsewhere tax is imposed, the significance is a bit weniger (lower), about 3.3 sigma.


The error margin of the result is about \(10\GeV\). If you interpret the photons as members of photon pairs coming directly from the annihilation of pairs of WIMPs (dark matter particles), the partial annihilation cross section (cross section times velocity of something) is about\[ 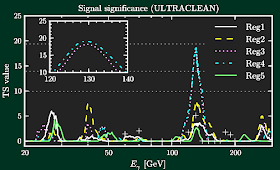 A graph from Weniger's paper shows the peak near \(130\GeV\). Note that two regional colors, violet and blue, show strong and correlated signals over there.

Gordon Kane has a different interpretation of the photons, however. In his stringy picture of physics, the photons should come from a decay of a neutral wino-like lightest superpartner to a photon and a Z-boson (note that all these three particles are electrically neutral) via a (charged) W-boson loop:\[

\] For many readers to recall their knowledge of special relativity, let me offer a calculation of the \(14\GeV\) that were added.

Both of the original winos were at rest so the momentum of the Z-boson has to be the same \(130\GeV\) as the photon's momentum, going in the opposite direction. Now, one may calculate the energy of this Z-boson:\[

\] The total energy of the two annihilating winos is therefore \((159+130)\GeV=289\GeV\) and if you divide it by two, you get about \(144\GeV\) which is the deduced mass of the wino (because the momentum is zero). Note that in their fresh review (TRF), Kane et al. concluded that LSPs and axions may both contribute to dark matter and argued that a 140-200 GeV LSP is both consistent with their scenario as well as useful in explaining some previous observations by PAMELA and FERMI (in terms of annihilation into a pair of W-bosons). The axions interact way too weakly to produce similar signals.

So this one-man paper may turn out to be the battle of Stalingrad in the war on the existence of dark matter in direct searches, a war that we have repeatedly covered. (Or use any better analogy if you find one that wouldn't conflict with the fact that the discoverer of this signal near \(130\GeV\) is German.)

The Fermi satellite will unfortunately need years to conclusively settle the question whether this signal is real or a fluke. But it is already strong at this point; as far as I can say, the main question is whether the comrade from West Germany has made a mistake.

Because the reported mass is so close to the expectations of a light lightest superpartner and because SUSY is such an excessively natural source of WIMPs (weakly interacting massive particles, a leading opinion about the qualitative properties of dark matter particles), the existence of this signal increases the probability that Nature hasn't overlooked low-energy supersymmetry as a handy and beautiful tool to achieve many vital goals She has faced.

You should try to appreciate that a \(130\GeV\) gamma-ray line can't arise from any known particle, not even the \(126\GeV\) Higgs that often splits to two \(63\GeV\) photons. It has to come from a new particle species. There have to be lots of particles belonging to this species and they have to be rather stable because they're not gone yet. The only truly justified reason for the stability is a new symmetry (at least among particles that interact strongly enough: gravitinos are excluded here); the stable particle is the lightest particle charged under the new symmetry. It has to be a discrete symmetry because there's no new long-range field. The Standard Model Lagrangian doesn't preserve a nontrivial discrete symmetry; supersymmetry with its R-parity and some models with extra dimensions are the only known natural sources of such new discrete symmetries, of such new stable particles. Jester who has made the $10,000 (vs $100) bet against SUSY (defended by your humble correspondent) should better buy lots of new underwear.
Luboš Motl v 7:59 AM
Share