Hackers sometimes manage to attack a server at a random moment. But what happened in the Czech Republic just an hour ago seems more amazing and scary. The most intense cyber attack campaign in the Czech history began.


Yes, that's their scream every time they eliminate a server.

The websites of four largest political parties represented in the Parliament, namely www.cssd.cz, www.ods.cz, www.kscm.cz, and www.top09.cz, have been "turned off" by the Czech branch of the mysterious Anonymous movement. Just contemplate what it means: they're able to realize this threat at four major places simultaneously.

In this 7-minute Czech Anonymous propaganda movie, "Revolution 2012" (see a slightly different U.S. version), they promote conspiracy theories about the freedom of speech that is threatened by some mysterious political circles. International corporations are the main tools of those folks who want to conquer the whole world, we hear; the Internet is their main enemy because the main job for the Internet is to organize rallies of those people whose brain size forces them to be fans of Anonymous.

The unknown warriors have guest blogger on Mark Zuckerberg's blog, www.facebook.com, and announced the timing when the servers should be eliminated:

Clearly, some other hackers joined them because they're well ahead of the schedule. A copy of the plan was first published on http://www.peopleANARCHONUTSsliberationfront.net/anonpaste/index.php?d43f31560d7f3314#2xemcj9cGXMq16D70WD7claZUi5yKWtPDuEEalGzbFo= this insane URL (erase "anarchonuts" from the URL). They tell everyone to use a tool called "BOIC" which may be downloaded from an URL cited above. The page is titled "Operation Extinction/Termination/Perishing".

Today, I was actually swimming in the Bolevec Pond, or Bolevák Fishplace, to use a more colloquial Pilsner English, Pilsen's major recreational reservoir. It was delicious. Well, unlike others, I could only swim for 50 meters, after 10 minutes of standing in the water and getting used to the temperature, but I may still classify it as swimming.

No, I don't remember I ever swam in Czechia in April before. But my memory isn't perfect and it's plausible that in Greater Boston, I actually did have this experience – in the Atlantic Ocean. 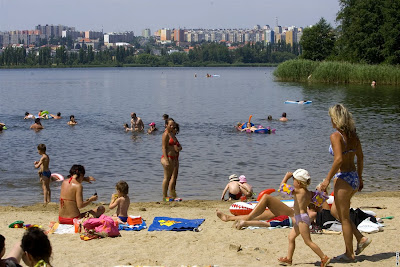 There's been a huge hot spot in Central Europe with temperatures as much as 8 °C above the normal. The sky was totally blue, too. A full-fledged summer. In coming days, the heat will gradually cool off from the West. Too bad.

Only after this text was written, I looked at bolevak.cz to find out that the water temperature was 12.5 °C; but the figure may exaggerate how cool it is because it seems to be 3 days old. Not bad anyway but it's not my personal record. We once swam in an Austrian lake that was about 7 °C, I believe.